Child goes on ‘bucket list’ trip before he goes blind 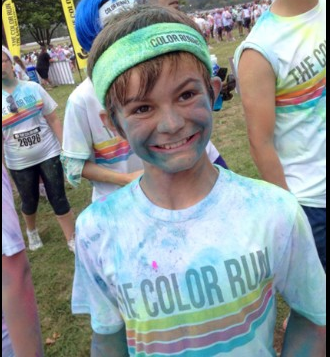 As will also happen to two of his older brothers, 12-year-old Louis Corbett will one day be blind.

The three young New Zealanders have retinitis pigmentosa — a progressive disorder that eventually deteriorates vision over the course of decades.

But for the youngest of the five Corbett children, that day will come much sooner.

"Last year was a hard one for poor Louie," mother Catherine Corbett told CNN over the phone from their home in Auckland. "That's when he learned that his case was accelerated."

Though it may seem like a coincidence of extraordinary odds that three young brothers would be stricken with retinitis pigmentosa, it really isn't. Though rare, the disease is hereditary.

Faced with the grim reality that Louie will soon lose the ability to see the world around him, the Corbetts decided to embark on an international sightseeing tour. "This year we're going to try and fill his world with as many beautiful images as we can," his mother told CNN.

Instructed to make something of an ocular bucket list — things and places he'd like to see for the first, only and likely last time — Louie picked places like the Grand Canyon, Niagara Falls, the Empire State Building and, in a sign of the times, Google headquarters in California.

But the thing Louie wanted to see the most with his own eyes wasn't a landmark or a national park; Louie wanted to take in a game, because like many young boys his age, Louie is a sports fan. But unlike most of his Kiwi peers who would favor nationally popular sports such as rugby and cricket, Louie's sport of choice is a bit out of the ordinary.

"For some reason he really got hooked on American basketball," his mom said. "He cares about nothing else. He is really quite passionate about it."

Louie's number one wish was to go to Boston to see his beloved Celtics play a game.

Making the list was the easy part. Getting there, however, would be trickier. With Louie's eyesight rapidly fading — by 50% in the last year alone — the trip was going to have to be soon. Like, matter-of-weeks soon.

That's when Warren Casey, the CEO of a Boston-based software firm, stepped in with a hefty donation and the promise to raise even more. The fact that Casey's company is based in Boston — the very place Louie was headed — had nothing to do with why Casey got involved. "That was a random coincidence," he told CNN. "I did it because the Corbetts are my next door neighbors."

Casey makes the 24-hour-plus trek from his Auckland home to his office in downtown Boston every six weeks. He got Air New Zealand to pick up Louie's airfare tab, and donated his own points as well.

Thanks to the generosity of Casey and his partners at Ceiba Solutions — who agreed to pay for the trip no matter how much was raised — as well as the generosity of friends and strangers from opposite sides of the planet, more than $25,000 was raised in just four weeks.

"It is so touching," Catherine Corbett said. "People are just so supportive."

The fund-raising campaign soon picked up steam on social media, and that's how Corinne Grousbeck heard about Louie two weeks ago.

"Somebody Tweeted me an article about this boy in New Zealand and told me I should read it," said Grousbeck, who lives outside of Boston. Grousbeck is the incoming chair of the trustees at the Perkins School for the Blind, the oldest school for the visually impaired in the country. Her own son, 21-year-old Campbell, was blinded by a condition similar to Louie's.

"I completely understood where the Corbetts were coming from in wanting to build a visual memory bank for (Louie)," Grousbeck said. "It's an incredibly difficult thing to have to go through."

But that wasn't the only coincidence; Grousbeck's husband just so happens to own the Boston Celtics.

"Of course when I read about how he was a big Celtics fan I knew that we had to have him come for a game," she said.

The coincidences didn't end there.

When Grousbeck learned that the Corbetts would be coming to Boston for their game on March 5, she realized that she would unfortunately not be able to give Louie the best seats in the house — her seats — because she had already given them away.

"March 5th had coincidentally been scheduled as Perkins School for the Blind Night at the TD Garden (home of the Celtics)," she said. "We'd already given away our seats to the school's students, families, and donors."

While Grousbeck will see to it that Louie will indeed be given great seats to watch the Celtics play for the first time, she thinks the real show will take place before tipoff; the Perkins chorus is singing the national anthem that night.

"I think for a 12-year-old like Louie, for him to be able to watch visually impaired kids perform the national anthem on a national stage, for him to see what blind people can achieve, that's going to give him the lasting memory,"she said.

And if there is room for one final coincidence for young Louie on the final leg of his tour, the Celtics won't be his only stop while in Boston. He'll spend a day at the world-renowned Massachusetts Eye and Ear Infirmary, where cutting-edge ocular research is being done that one day might turn Louie's "farewell to vision" tour into simply one heck of a trip he took when he was 12.

Those odds might be long, but smart money wouldn't bet against Louie — he seems to have serendipity on his side.