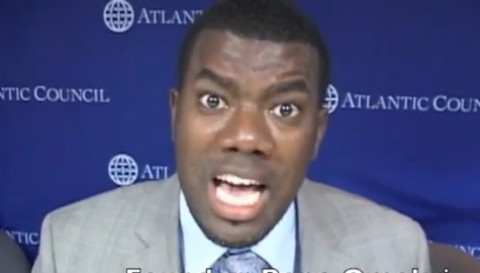 The All Progressives Congress, APC, has said the failed attempt by a presidential aide, Reno Omokri, to link suspended Governor of Nigeria’s Central Bank, Lamido Sanusi, to the increased attacks by Boko Haram, has shown that the presidency may be seeking to profit from the insurgency that has led to the death of thousands of people.

PREMIUM TIMES had shown how Mr. Omokri, President Goodluck Jonathan’s adviser on New Media, had created an article and circulated same using a false name, Simon Wendell. The article had tried to link Mr. Sanusi to the sponsorship of the outlawed Boko Haram sect.

Both Mr. Omokri and the presidency have kept mum since the aide’s action was revealed and condemned by several Nigerians.

In a statement issued in Lagos on Monday by its Interim National Publicity Secretary, Lai Mohammed, the APC said Mr. Omokri’s attempt to push an article he authored into the public domain, using a fake name, is the clearest indication yet that the presidency has a case to answer and may have been feeding Nigerians with doctored information.

It said the attempt to blame the recent spate of attacks by Boko Haram on Mr. Sanusi raises some pertinent questions: “Is the presidency trying to gain political mileage from the death of innocents Nigerians, including school children, whom it could not protect? Could this be why the government has largely treated the insurgency with levity, especially in its early days? Does the presidency know more than it is telling Nigerians on Boko Haram? Is there a government Boko Haram that acts on instructions from some quarters? Is anyone in government profiting financially from the battle against Boko Haram that they may be sabotaging efforts to end the insurgency?”

“The best way to know the answers to these questions is for the State Security Service to immediately arrest and question Omokri on why he was trying to act by subterfuge to misinform Nigerians, how long he has been engaged in this shameful and irresponsible act, what his connections are, if any, with Boko Haram, and whether or not his handlers, including the President, approve of his chicanery,” the APC said.

The party said Mr. Omokri’s action should be seen within the context of some curious coincidence between several past Boko Haram attacks and certain low moments and/or at critical junctures in Mr. Jonathan’s administration.

Giving some instances, the APC said the January 20th 2012 deadly attacks in Kano that left about 162 dead occurred at the height of the fuel subsidy protests that shut down the country; the Christmas Day attack in Suleja that killed about 37 people and injured 57 appeared to be a distraction from the series of deadly attacks that had rocked the country earlier; the fact that Boko Haram struck within days of fugitive ex-Bayelsa Governor Alamieyeseigha’s amnesty that attracted widespread criticism; and the resurgence of Boko Haram that coincided with Mr. Sanusi’s suspension.

“The coincidences become even more curious when viewed against the apparently informed statements by two Governors in the North-east, where recent attacks have been concentrated. First, Borno Governor Kashim Shettima called attention to the fact that we need to do more to fortify our troops if they are to defeat Boko Haram, only for the statement to be twisted out of context and a vicious offensive launched against him by presidential attack dogs

“Secondly, Gov. Murtala Nyako of Adamawa, himself a retired military top brass, wondered aloud why the checkpoint near the FGC in Yobe was removed before the attack and who ordered the removal? Why the authorities have not been able to trace the deadly weapons being used by Boko Haram to the manufacturers? Who transports the weapons and how is that possible when the states affected are under a state of emergency? Why retired Gen. Shuwa was killed and the army failed to respond during the attack on his residence, and why the air force base in Maiduguri was attacked even with an army unit nearby

“Thirdly, the fact that the attacks have spiked as we move closer to the 2015 elections, and a presidential aide is trying to link a perceived enemy of the Jonathan Administration to the insurgency suggest the government may be viewing the terrorist attacks as a wild card to be leveraged one way or the other ahead of the elections,” the APC said.

Spread the loveBy now, most people have read the story END_OF_DOCUMENT_TOKEN_TO_BE_REPLACED