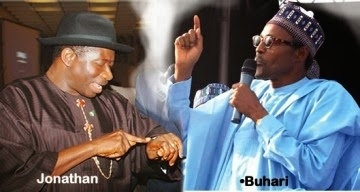 One thing is certain, there will be a new government in Nigeria come May 29th, 2015. It is an inevitable and well deserved change. Everyone is already going Havard and Cambridge on the kind of magic GMB would perfom to rescue our hemorrhaging economy.

Stupidity is voting against change and when change eventually emerged winner you suddenly expect the change you voted against to fulfill promises you reiterated are not possible over night.

Reminding Nigerians that GMB promised if elected will make one Naira equal One Dollar is not only myopically funny but shamelessly hypocritical. Why make a mountain out of a molehill?

Our leaders understand that majority of nigerians are gullible, if not, commonsensical procedures would have dictated the quoted statement, check the context on which such is based, if it exists or not and evaluate for its plausibility before jumping to conclusions.

If only you know what a reduction in the executives' and legislatures' salaries can do for Nigeria, what the money used to induce our obas and our religious leaders before the general elections can do and what money stolen from our government's coffers in the name of "SUBSIDY" scam can do.

If only you realize how much can be saved, if we decide to plug just 80% of all "leakages and looted funds" in our economy, you will now understand in practical and not theoritical terms that a stabilized economy is possible.

Majority Nigerians are willing and ready to sacrifice to see that the incoming government succeeds in rescuing Nigeria from it's decrepit state but some unrepentant critics have started off on the wrong foot, they have been criticizing every actions of GMB. To them there's no difference between the GMB of 1983 to that of 2015. As we await the inauguration ceremony come May 29th, many are already sharpening their criticism tools. They would want to dare the incoming president to know if he is truly a repentant democrat or an unrepentant dictator clothed in democratic linings. That's a wrong way to play opposition politics and with such an attitude, armchair critics, hired critics and pull him down critics will take the place of fair, balanced and constructive criticism.

The time to unburden our burdens is almost here, but it won't come without a price, toes will be stepped on. When the prosecution of corrupt officials whose perfidious acts impoverished our nation will commence, let no man say GMB is being vindictive as speculated.

As GMB is about inheriting an empty treasury, if he settles for an alternative source to his would be predecessor's foot steps in borrowing money to pay civil servants' salaries and it results in delays in payments of workers' salaries for about 2 to 3 months, let not the rabble-rousers open up their lose canon mouths in protest.

Let me drop this quote that has been credited to many authors to our unrepentant critics; "it is better to remain silent and be thought a fool, than open one's mouth and remove all doubt".

Nigerian electorates have reached the destination where the right to choose who governs them remains the exclusive preserve of the people regardless of the millions of dollars shared or how many endorsements one gets prior to election. Hence the reason why "we" collectively chose a tested and trusted candidate that will certainly unburden our burdens by initiating radical changes, policies, institutions and structures on assumption of office.

As we await our burdens to be unburdened, Nigeria could be likened to a faulty car that the owner had to sell off unwillingly because of the car's constant break down and GMB is the new buyer, he must drive the car to decode it's faults before bringing it for repairs. That's the situation we are about entering right now, GMB will become president first before he would be able to know how depleted our economy is. As we await the inevitable change come May 29th, 2015, I will advise Nigerians not to be in a hurry in criticizing GMB, he needs time to test run his newly acquired "tokunbo car" called Nigeria before fixing it's faults.

Spread the loveAs the nations of the world endeavor to END_OF_DOCUMENT_TOKEN_TO_BE_REPLACED