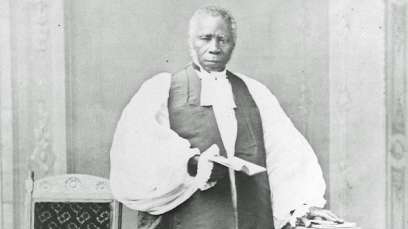 According to reports compiled by historians, prejudiced fellow Anglican missionaries wrongly questioned the moral values and competency of Bishop Crowther and his African staff – and systematically dismantled his mission and undermined his work, in the end, he resigned

The Archbishop of Canterbury and leader of the Church of England, Justin Welby has apologised for the church's mistreatment of Africa's first bishop, Samuel Ajayi Crowther.

“We in the Church of England need to say sorry that someone was properly and rightly consecrated Bishop and then betrayed and let down and undermined. It was wrong.”

The Archbishop of Canterbury Justin Welby preaches in a service at Holy Sepulchre Church, Grafton on August 14, 2014 in Auckland, New Zealand.

Regarded as the father of Anglicanism in Nigeria, Bishop Crowther, who was born as Ajayi in western Nigeria in 1807, is credited with bringing many Nigerians to Christ. So great was his impact that he was ordained the first African Anglican bishop in 1864, despite great protest.

A former slave, Bishop Crowther became a great linguist, translator, scholar and mission teacher. He is also credited with producing the Yoruba Bible and greatly influenced how government’s improved their view of Africa in the 1800s.

But despite his passion and high achievements, Bishop Crowther’s mission was undermined and dismantled in the 1880s by racist white Europeans, including some of his fellow missionaries.

According to reports compiled by historians, prejudiced fellow Anglican missionaries wrongly questioned the moral values and competency of Bishop Crowther and his African staff – and systematically dismantled his mission and undermined his work. In the end, he resigned.

Researchers at the Boston University’s School of Theology in the US wrote: “Mission policy, racial attitudes and evangelical spirituality had taken new directions, and new sources of European missionaries were now available. By degrees, Crowther’s mission was dismantled: by financial controls, by young Europeans taking over, by dismissing, suspending or transferring the African staff. Crowther, desolated, died of a stroke.” Bishop Crowther was replaced by a white bishop.

Archbishop Welby speaking of Bishop Crowther continued : “In spite of immense hardship and despite the racism of many whites, he evangelised so effectively that he was eventually ordained Bishop, over much protest. He led his missionary diocese brilliantly, but was in the end falsely accused and had to resign, not long before his death.”

“Crowther did not make himself grand. He lived out the commands of the words he took at his consecration. And from his time forward, God has demonstrated his grace through that ministry. Today well over 70 million Christians in Nigeria are his spiritual heirs.

“Today we honour him and in so doing The Lord Jesus Christ whom he served. We are sorry for his suffering at the hands of Anglicans in this country. Learning from their foolishness and from his heroism, we seek to be a church that does not again exclude those whom God is calling. We seek new apostles, and the grace to recognise them when they come.”

Previous Post FEMI FANI-KAYODE: THE MANY LIES OF JOE IGBOKWE … By Jude Ndukwe
Next Post THE MINDSET OF THE ENEMY by Femi Fani-Kayode