US will do ‘everything possible’ to rescue Nigeria girls – Kerry 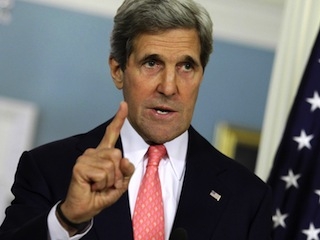 US Secretary of State John Kerry on Saturday vowed that Washington will do “everything possible” to help Nigeria deal with Boko Haram militants, following the kidnapping of scores of schoolgirls.

“Let me be clear. The kidnapping of hundreds of children by Boko Haram is an unconscionable crime,” Kerry said in a policy speech in the Ethiopian capital Addis Ababa.

“We will do everything possible to support the Nigerian government to return these young women to their homes and hold the perpetrators to justice. That is our responsibility and the world’s responsibility,” he said.

The US, he added, was “working to strengthen Nigeria’s institutions and its military to combat Boko Haram’s campaign of terror and violence”.

Gunmen believed to be Islamist fighters stormed the girls’ boarding school in the country’s northeast nearly three weeks ago, forcing them from their dormitories onto trucks and driving them into the bush after a gun battle with soldiers.

Nigerian police on Friday said Boko Haram militants were holding 223 girls of the 276 seized from the school, revising upwards the number of youngsters abducted.

The girls’ abduction has triggered global outrage and prompted protests in a number of Nigerian cities, as desperate parents call on the government to secure their release.

“We need to sustain the message and the pressure on political and military authorities to do everything in their power to ensure these girls are freed,” protest organiser Hadiza Bala Usman told AFP.

She said that women and mothers will on Tuesday march to the offices of the defence minister and chief of defence staff “to ask them what they are doing to rescue our daughters”.

“We believe there is little or no effort for now on the part of the military and government to rescue these abducted girls, who are languishing in some dingy forest,” she said.

The mass kidnapping is one of the most shocking attacks in Boko Haram’s five-year extremist uprising, which has killed thousands across the north and centre of the country, including 1,500 people this year alone.

A car bombing in Nigeria’s capital Abuja on Thursday that killed 19 has fuelled fears that the Islamist group may be shifting its focus outside of its historic base in Nigeria’s remote northeast.

Previous Post US warns of possible hotel attack in Lagos
Next Post Boko Haram will “sell your girls in the market”, the terrorist leader has vowed in a chilling video message to parents of the kidnapped Nigerian schoolgirls.