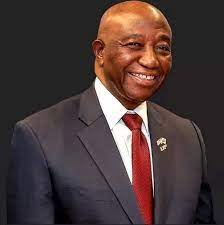 On The LAUNCHING OF THE JOSEPH N. BOAKAI FOR PRESIDENT MOVEMENT in Providence, Rhode Island…USA…..On October 22, 2016

Introduction: Chairperson of the Joseph N. Boakai for President Movement, Mr. Joe Norris, Rhode Island Chapter, Co-chair, Chairperson of the Planning Committee, Mrs. Johnny, and her Co-Chair, Mr. Jerry M. Barcon, Distinguished personalities of the Movement from other parts of the United States, Officials of the Liberian Government present with us here tonight, Friends, Fellow Liberians, distinguished ladies and gentlemen.

May I, Ladies and Gentleman, on behalf of my family, express my thanks and deepest appreciation to The Joseph N. Boakai for President Movement, USA, Rhode Island Branch, for the invitation extended to me to be tonight’s keynote speaker. As a classroom schoolteacher, I am touched and moved by the invitation.

Please rise, and join me in rendering round of applause to this movement for the excellent job for bringing us together here tonight. I am told that a dinner has been prepared to compliment tonight’s event.

I intend to be brief here tonight. I stand to be corrected. In my view, the purpose of this movement is to make sure that His Excellency, Joseph N. Boakai becomes the next President of the Republic of Liberia. There are several ways by which this movement could be helpful in this endeavour. Tonight, I will endeavour to discuss the various attributes involved on supporting a candidate for president: How to Support a Candidate for President, especially in Africa.

Presidential candidates rely on many different kinds of support in order to function successfully. They need voters, donors, volunteers, and staff, and nearly everyone can fill at least one of those roles.

A campaign is basically composed of five departments: political, communications, fundraising/financial, data, and field. If you aspire to work for a campaign, you’ll need to learn a skill that is transferable to one of those departments.

• Field operations manage volunteers, register voters, forge relationships with community leaders, and conduct get out the vote efforts. If you’re good with the public, and are totally committed to the candidate, able to work eighty hours a week, working in the field might be good for you.

• Those in the area of Communication should be able to craft messages, write press releases, ads, and speeches, and deals with the media generally. If you have a background in writing or journalism, communications might be the place for you in this Movement.

• Fundraising and financial departments: Individuals in this area must endeavour to bring in the money and help decide how it will be spent. They find and research donors, manage the candidate’s “call time,” or fundraising calls, and help create budgets for the Campaign. Most diaspora-based organizations belong in this area, since they are not on the ground, but have the capacity to raise funds on behalf of the campaign.

• The data department uses demographic, economic, polling, and population data to tell the campaign where the voters are in Liberia, and which counties/states to target first. I will endeavour briefly, to analyse the demographic of Liberia, relevant to the 2008 national Census reports.

Identifying Sources of funding is crucial to any presidential campaign, especially in Africa.

All the methods of funding political parties practiced elsewhere in the world are in use in Africa. These are listed here in what, it is argued, is a descending order of conformity with democratic ideals and the principles of good governance.

This movement, if adequately prepared, can be a powerful force to conduct a comprehensive campaign, making sure that His Excellency Joseph N. Boakai, becomes the next President of the Republic of Liberia.

I will now endeavor to look at Liberia’s Demographics

According to Liberia Institute of Statistics and Geo-Information Service, the following is the reflection of the country’s population in each of the political subdivisions.

Ladies and Gentlemen, this is a reflection of the population of Liberia, this organization or movement could utilize this information, move into Liberia and help to elect, His Excellency, Vice President Boakai, to become the next President of the Republic of Liberia.

Madame chairlady of this event, Chairman Norris of the Joseph Boakai Movement, Rhode Island Chapter, ladies and gentlemen, I hope the information provided to you all here tonight will be very useful and helpful. Our determination in this endeavor is not so much about electing the vice president to be the net president, but it is about the future of our children and grand children. This endeavor is bigger than Hon. Boakai, it is about the future of Liberia, and it is about bringing Liberia back to her African realities, where the leaders of the land are able to communicate in one of the African languages of the Liberian Nation. This election is about electing an individual who is a reflection of the soil, a reflection of our African-ness, it also about electing someone who respects and values our culture and our rich African heritage. Liberia is in need of leaders who will awaken our African-ness… leaders, that have the fortitude and the resolve, and will reaffirm in their actions, that Liberia indeed belongs to all Liberians. Each one in this hall here tonight, must be mindful of Liberia’s history and must endeavor to support a leader that will bring honor and respect to the memory of our forefathers.

Before I take my seat, let me leave you with a poem entitled:

Liberia, We Praise Your Name

For you, you give us birth

And the time is now for all of us,

To see ourselves as one.

1. 1.. Let me drink from the waters where the mountain streams flow

2. Let me walk down the highways where my brothers and sister are in peace

Let me go into the great country, where the land meets the sky

3. From the East and from the West

All will gather soon

And the song they sing is the song of Hope

The Hope for all Mankind

For you, you give us birth,

And the time is now for all of us, to see ourselves as one.

Spread the loveAs the nations of the world endeavor to END_OF_DOCUMENT_TOKEN_TO_BE_REPLACED