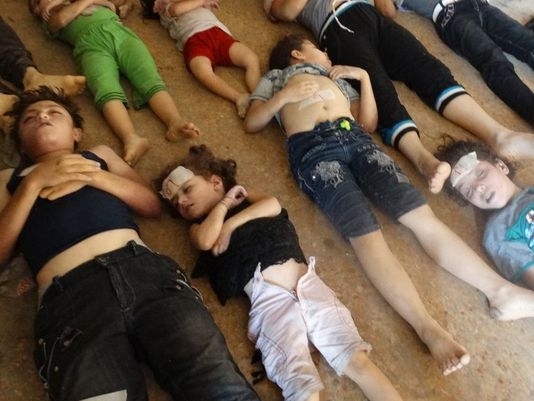 This won't be easy. Syrian President Bashar Assad is a stubborn man of immense cruelty. But doing nothing isn't an option. That approach has already failed.

After drawing a "red line" last year, President Obama chose to look the other way when Assad's regime was accused of previous, smaller chemical attacks. It is reasonable to assume that Assad launched the latest assault last week because he concluded that Obama's threat was hollow.

Ignoring this incident, which killed hundreds, including sleeping children, would invite worse.

It would demolish U.S. credibility, not just in Syria but also in Iran, which continues to pursue nuclear weapons despite repeated U.S. warnings. Nearly a century of international effort to curtail use of chemicals would also be undercut.

Even so, reacting in a way that sucks the U.S. into yet another Muslim civil war is no less hazardous.

The Pentagon says it sees no viable successor regime should Assad fall. The rebellion is divided among violent Islamist radicals and more democratic elements that fight each other as much as they do Assad's forces.

The conventional wisdom is that no faction will control the country, which instead will be violently split — exactly the kind of situation that the U.S. cannot win but one that congressional hawks and allies, including France, would like to engage.

All signs suggest that the administration is zeroed in on the dilemma. This is not George W. Bush trumping up a war in Iraq to take away non-existent weapons of mass destruction, or Lyndon Johnson fabricating an attack on U.S. forces to draw support for escalation in Vietnam.

The Obama administration, wary of war, is gathering allies, weighing options and ratcheting up forces while seeking confirmation that chemicals were used and that Assad used them. It needn't rush.

A missile attack appears the likeliest and smartest option. It could be used to weaken Syria's air power, to destroy units that used the chemical weapons, to strike the weapons themselves, or to attack other targets.

Fortunately, virtually no one favors use of ground forces, but that doesn't mean it can't happen. It's not hard to imagine unintended consequences — such as a retaliatory strike by Iran or its terrorist client, Hezbollah — that would send things spinning out of control.

That's reason for caution. It is reason for precision. But it is not reason for inaction. At this point, retaliation can't be avoided without unacceptable consequences — assuming suspicions are confirmed.

Spread the love  “Life’s most persistent and urgent question is, END_OF_DOCUMENT_TOKEN_TO_BE_REPLACED