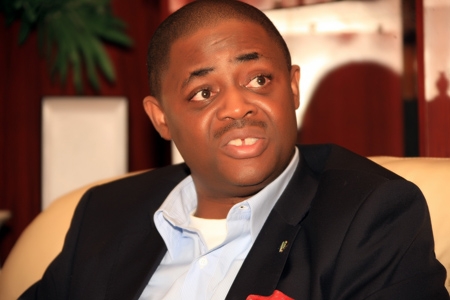 FORMER Minister of Aviation, Mr Femi Fani-Kayode, has accused the All Progressives Congress (APC) of pursuing an Islamic agenda, even in the running of the party and playing politics with the issue of kidnapped girls in Chibok, Borno State.

Fani-Kayode made this known in a press statement issued on Monday to formally announce his intention to dump the party.

Announcing his return to the ruling Peoples Democratic Party (PDP), Fani-Kayode said “I wish to inform the general public that as of today (Monday), June 2, 2014, I have left the APC and gone back to the PDP. I wish the APC well in all their endeavours but as of today, we have parted ways forever and my spirit has left them.”

The former minister noted that against a crooked statement issued by the spokeperson of the party, Alhaji Lai Mohammed, he had “declared for the APC in June last year in Ado-Ekiti, Ekiti State, well before the party was registered by INEC.  I formally joined the party amidst  great fanfare  on February 7, 2014.”

According to Fani-Kayode, “I have stated these facts and set the record straight due to the fact that Alhaji Mohammed, the spokesman of the APC, had the effontry to say in an interview with Premium Times magazine earlier today that I was never a member of the APC and that I never joined them formally.

“He also went further to say that if I had been a member of the APC, the party would have sanctioned me for expressing my opposition to the idea of a Muslim/Muslim ticket.

“The truth is that Mohammed is a coward. If he wanted to know the truth, he and those that sent him to issue the statement could have called and asked me. He ought to have done his homework before speaking out.

“I was not only a member of APC, but I was also a leader of that party and a foundation member. Yet, once I joined I began to see things as they really were. I have never been and will never be part of a cult and the fact that people like Mohammed and those he represents within the APC are not comfortable with any form of admonition or criticism from senior party members like me speaks volumes.”

Revealing APC’s relationship with Boko Haram and its Islamic agenda, he said all steps being taken by the party, whether by the composition of its structure or its impending presidential candidacy, connoted one cleverly pursuing an Islamic agenda.

According to Fani-Kayode, the party, which has continuosly shown sympathy for Boko Haram, “is clearly purusing an Islamic agenda.

“I am a devout and committed Christian and I cannot remain in a party where a handful of people that have sympathies for Boko Haram and that have a clear Islamic agenda are playing a leading role.

“This is made all the more untenable when some of those people are working hard silently and behind the scenes to impose a Muslim/Muslim ticket on the party for the presidential election next year.

“I believe that religion ought to play no part in politics but a situation where members of the Christian faith are not treated as equals and where the all the substantive positions of the National Executive Committee (NEC) of the party are made up of almost exclusively Muslims is unacceptable to me.”

Before his revelation, Fani-Kayode hinted that he had sought audience with several top echelons of the party to solve most of the issues raised in his statement.

He said he went the extra mile to explain the situation because he believed some of the leaders of the party shared his views.

“I have raised these issues privately with virtually every key party leader, including most of the governors but nothing has changed.

“In fairness to members of the party, there are many leaders within its ranks who share my views and who are also opposed to the religious agenda, but I am not prepared to stay and fight from within, because the very presence of any closet Haramites on the same political platform as me is something that I find utterly repugnant,” he noted.

Reacting to Fani-Fakayode’s claim, the APC spokesman, Alhaji Mohammed, said he stood by his words.

According to him, “I stand by my words that Fani-Kayode was never a leader of my party. He couldn’t have been a leader, because he was never a member of any organ of leadership in the party, either at national or state level.

“That he had access to leaders of the party would not make him a leader, because he was not involved in any leadership level of the party.”

On the issue of Muslim-Muslim ticket, Alhaji Mohammed said: “we are a national party and any party pursuing Muslim-Muslim or Christian-Christian agenda at this point in Nigeria will fail.”