Okuneye aka Ajagajigi, shot dead inside a church at Ijebu Igbo 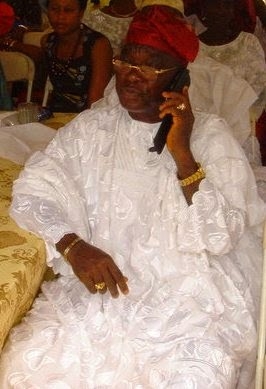 Pandemonium struck this morning in the western Nigerian city of Ijebu-Igbo in Ijebu North local government area of Ogun State when 10 gunmen stormed a church and shot dead a 70 year-old man.

The 10 men arrived the church in two vehicles and fired shots on the man’s head.

The incident occurred at the St.John Anglican Church,Oke-Sopen,Ijebu-Igbo.

Said a witness: “We were in the church and it was exactly when the Pastor started his sermon at around 11 a.m. Those boys came into the church and went straight to where Ajagajigi sat and shot him on the head.

“We were shocked and everybody was jittery as the service abruptly came to the end.Some people,especially,the elderly people were still in shock as I am talking to you now.No one can say anything about his death. He is not a politician,if he is one,we would have been thinking that his political opponents carried out the act,but as it is now,the church has been deserted,except some few people who were with the Pastor”.

The deceased residence at Kazeem street,Shokas area,Oke-Sopen in Ijebu Igbo has now turned into a Mecca of sort as sympathisers trooped to the house to offer condolences.

Otunba Tola Okuneye is survived by six wives and over 20 children.

Previous Post Ondo Bye-election: LP and PDP in Tight Race.
Next Post It is official, Nigeria is Africa’s biggest economy