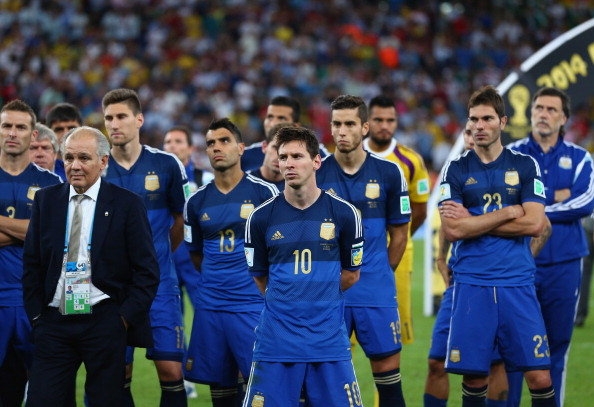 Before the first half of the World Cup final between Argentina and Germany was even over, Lionel Messi was vomiting. This, unfortunately, is nothing new for Messi, nor is it something that seems to bother him very much. It also was not the low point of his night.

He gave Germany a few scares in the first 45 minutes and he had one last chance to change the result with a free kick in the final seconds of extra time after Germany made it 1-0. But, through no fault of his own, it just wasn't meant to be for Leo Messi as the better team won their fourth World Cup title and beat Argentina in the final rounds of the tournament for the third straight time.

To the surprise of many, Messi was awarded the Golden Ball after carrying Argentina through the group stage with four goals. Yet even this high honor couldn't cheer him up as that crowning achievement — a World Cup title — remains the one thing missing from his overflowing trophy room.

So to stand on the pitch and watch Germany celebrate meant more than just one major loss for Messi. It also the start of at least four more years — if not a whole lifetime — of being prodded with obsessively critical World Cup talk. "Yeah, all that amazing stuff you constantly do every year is great, BUT WHAT ABOUT THE WORLD CUP?" And after coming this close, it will probably take it to a new level.

"Your kindness is both infuriating and so comforting, Bastian. I don't want anymore hugs right now, but maybe in a few hours we can build a Lego pirate ship together if you're not too busy being happier than I am."

"Maybe I'll throw my runner-up medal as hard as I can just to show how little second place means to me. … Nah, I'll probably just keep it and auction it off for charity at some point. That would be nice."

"I'm going to call this my Golden Ball of Sadness."

"I'd rather wear that itchy turtleneck that grandma made for my birthday last year than this medal. Hopefully Sepp Blatter doesn't ask why I'm not wearing the medal he gave me like she does with that turtleneck every time I see her."

"Maybe I should change my name to Sven Guacamole and start a new life as a school counselor."

"Nah. The kids at the school would probably still ask me why I haven't won a World Cup even if they don't know who I am."

Spread the loveOf all the updates that have been given END_OF_DOCUMENT_TOKEN_TO_BE_REPLACED