Lamido Sanusi was right as another Female Super-Minister is in N3.1 bn Private Jet Scandal-Economicconfidential 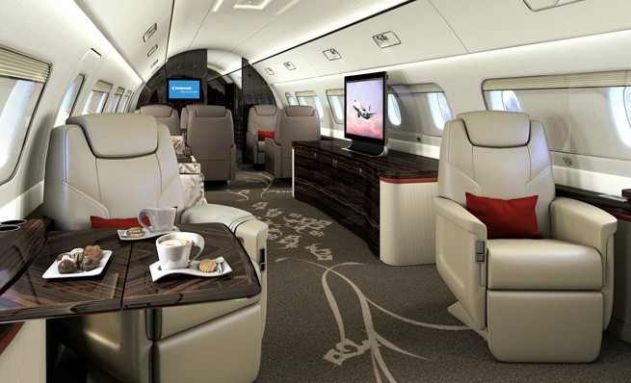 In what is seen as a reprisal attack, fresh allegations are flying over mounting profligacy by another female minister in the cabinet of President Goodluck Jonathan. One of the remaining two super-female ministers is being alleged to be wasting billions from public purse to maintain a private aircraft.
A group, Concerned Aviation Professionals (CAP) in a petition to President Goodluck Jonathan against the minister whom they described as celebrated but most controversial in the history of Nigeria said she have committed up to N3.120 billion in maintaining the jet devoted to family businesses alone.

Although CAP fell short of mentioning names, researches by Economic Confidential suggest that the group could be referring to Mrs. Dieziani Alison-Madueke.

CAP requested Jonathan to immediately launch a probe into the ownership, maintenance and usage of the Challenger 850 Jet marked OE-ILA which was domiciled at one of the private hangers in a Nigerian airport in the last two years.

About 15 months ago, there were similar reports in the media linking a minister to a private jet impounded by the French government carrying a business associate of top public officers on suspicions that the jet-a Bombardier Global Express XRS- belongs to the public officer.

The jet was discovered to have been purchased by the Bank of Utah Trustee in June 2012 through the same process that was also used in purchasing private jets for the governors of Rivers and Akwa Ibom States.

The petition signed by Abdul Malik Masaya and John Obande Anihiru, a copy of which was made available to the Economic Confidential said CAP has “impeachable records which confirms that the super minister has been frittering away scarce Nigerian resources in maintaining the Challengers 850 Aircraft at one of the private Hangars in the Nigerian Airports in the last two years.

“The incontrovertible evidence we have is that the Minister has been committing 500,000 Euros (N130 million) monthly to maintaining the aircraft in the last two to years. Thus, in two years, the Minister has committed the sum of N3.120 billion to keeping the jet which is used for personal use and that of the Minister’s family alone”, and thus demanded “a thorough probe of this allegation should start from the FAAN, NCAA and NAMA. The agencies have records of all the trips the Challenger 850 jet made on the payroll of one of the nation’s top revenue earning agencies.”
The group said it “cannot comprehend the sense in keeping a plane solely for the use of a Minister, especially when the plane is not part of the Presidential fleet. We also know that Mr. President will promptly and readily oblige the Minister the use of any of the Presidential jets if it becomes imperative for the minister to embark on official trips on behalf of the government. Details at our possession include the series of flights the Minister had engaged in with the said plane in the last two years. The details include the different locations, time and date of the flights as well as the dates the plane returned to Nigeria at each instance. In fact we can confirm to you that the plane has been in use since July 2012.”

According to Economic Confidential independent findings however, this latest sleaze exposure might be a retaliatory action by a recently fallen super Amazon minister who was also caught in the act of monumental corruption perpetrated in some parastatals of the Ministry. Loyalists of the sacked minister claimed it was a jealous colleague within the administration that leaked the matter to the press.

There have been various speculations that in a bid to eliminate their rivals, some members of the cabinet engage in activities that will discredit such individuals by leaking confidential and sensitive documents to the public.

It would be recalled that Princess Stell Oduah was also accused of monumental corruption and wasteful spending following revelations that she forced parastatals under her supervision to procure armoured cars for her use to the tune of N255 million. There were speculations that she was not the only minister who had acquired armoured official cars in her fleet.

In the current allegation, the petitioners claimed that they have details of the series of flights the minister had engaged in with the said plane in the last two years. The details in their possession also include the different locations, time and date of the flights as well as dates the plane returned to Nigeria at each instance. They confirmed that the plane has been in used since July 2012 and that the waste has continued to gallop even in the wake of dwindling national budget.

In conclusion the petitioners admitted that “last year, there was outcry over the purchase of two bullet proof cars at N255m by the former Minister of Aviation Stella Oduah. Right now, the Minister is no longer in the cabinet and the Aviation sector has been reorganised. Incidentally, the bulletproof cars are available for public use. What do we then say of a Minister who lavishes billions of public money to maintain a private jet?”

Spread the love
Oye Gureje: A Scholar As A Rhotacist, By Remi OyeyemiSpread END_OF_DOCUMENT_TOKEN_TO_BE_REPLACED
Previous Post The Evil That Men Do…Does Not Mean Anything in Nigeria-By Akintokunbo A Adejumo
Next Post We can’t account for N24bn received from service wide vote —Police Pension Office