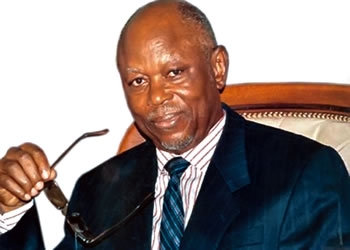 A former Governor of Edo state, John Oyegun,  has emerged the new Chairman of the opposition All Progressives Congress, APC.

The emergence of Mr. Oyegun, who will now succeed ex-Governor Bisi Akande, followed intense negotiations and horse trading among various contending forces in the party.

His nomination was subsequently ratified by APC delegates at the first National Convention of the party, holding at the Eagles Square, Abuja.

Mr. Oyegun’s candidature was promoted by a national leader of the party amd former Governor of Lagos state, Bola Tinubu.

Mr. Oyegun’s main challenger and former governor of Bayelsa state, Timipre Sylva, who was the candidate of choice for the governors elected under the banner of the party, reportedly stepped down for Mr. Oyegun earlier in the day.

A source familiar with the two-day horse-trading between the leaders of the party, told PREMIUM TIMES that an enlarged meeting of the elders of the party, which held few hours before the commencement of the convention succeeded in convincing the governors to allow Mr. Oyegun to emerge Chairman.

In the same vein, a new National Secretary in the person of Mai Mala Buni from Yobe state was elected to replace Tijjani Tumsah.

Mr. Buni’s emergence follows an announcement by former Vice President Atiku Abubakar shortly after voting has commenced that the elders from the North East geopolitical zone, where the position was zoned to, has ‎convinced former National Assembly presidential liaison officer, Kashim Imam, to step down.

PREMIUM TIMES gathered that the former Interim National Secretary,  who was also a strong candidate, was persuaded by the outgoing National Chairman of the party, Bisi Akande, to step down from the race and allow fresh officials to emerge as both Chairman and Secretary.

Mr. Shuaibu’s main challenger, a former member of the House of Representatives from Jigawa state, Farouk Aliyu, a candidate supported by ex-Head of State, Muhammadu Buhari, was also persuaded to step down on the eve of the convention.

The current Interim spokesperson of the party, Lai Mohammed, was returned as the National Publicity Secretary of the party.  Mr. Mohammed was elected unopposed.

Spread the loveBuhari’ government through the ministry of finance took END_OF_DOCUMENT_TOKEN_TO_BE_REPLACED