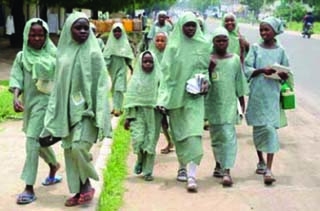 The state police commissioner, Tanko Lawan, also said 53 of the girls had escaped so far.

‪The Police and officials of the Department of State Security, otherwise called SSS, in Borno on Thursday came out with an increased fresh figures on the missing secondary school girls.‬

‪The security agencies said the total number of girls abducted and still unaccounted for stands at 276 as against the 234 figure being mentioned.‬

‪They said they have compiled an official list of kidnapped students, which is more authentic than that announced by the school management.

‪Parents of the abducted girls had last week told Borno Governor Kashim Shettima that 234 of their daughters had been discovered missing after they had all registered complaints with the school management.‬

The school principal had, however, told journalists during the governor’s visit to Chibok that 230 students were still missing with 43 accounted for. Most of those 43 escaped from their abductors, the principal had said.

‪The police and the SSS, however, addressed a joint press conference on Thursday at the headquarters of the Borno State Police Command.‬

‪The state police commissioner, Tanko Lawan, who also said 53 of the girls had escaped so far, explained that their figures were more reliable because they were carefully collated from various members of Chibok community and those in surrounding villages who confirmed not having their daughters back home since after the attack, even though he said the figures could even be more.‬

‪“It is really difficult to say the actual number of girls that were abducted. This is because, students from other secondary schools within the catchment area were deployed to GGSS Chibok to write their final year examinations due to the peculiar security challenges in Borno State,” the police boss said.

‪“The students were drawn from schools in Izge, Lassa, Ashigashiya and Warabe A. and that is why after the unfortunate incident, there were various flying numbers as to the actual number of girls that were taken away.

“The fact is that the number may likely change, especially when parents from some of the villages come forth and report the disappearance of their daughters. Most importantly, it is not the number that matters because all the girls are very important and we have to find them.‬

‪”There is serious collaboration between various security agencies at all levels towards rescuing the girls,” Mr. Lawan said.

He,  therefore, called on parents and community leaders to submit names and identities of their missing daughters”.‬

‪The security agencies said efforts are being made to free the girls, even as they provided special telephone numbers “so that parents and well meaning Nigerians can call and give useful information that will lead to the rescue of the girls.”

There has been widespread outrage since the kidnap of the girls from the Government Secondary School, Chibok, Borno State on April 14 by suspected members of the Boko Haram.

Protests have been held across the country to demand the release of the girls.

Spread the love  “Life’s most persistent and urgent question is, END_OF_DOCUMENT_TOKEN_TO_BE_REPLACED