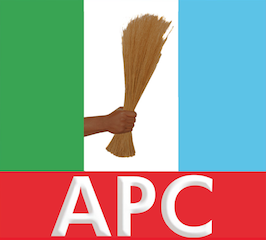 Barely 24 hours to the ward congresses of All Progressives Congress (APC), slated for Saturday, April 5, a faction of the party has emerged in Lagos State, southwest Nigeria.

It isled by the Chairman of the defunct Congress for Progressives Change (CPC), Chief Ajibade Emiabata.

Speaking at its new Secretariat on Ade-Onitimirin Street, Surulere, Lagos, Emiabata alleged that he and other Chairmen of the defunct political parties (ANPP, APGA) that formed the merger were completely sidelined during the APC’s Stakeholders’ Forum held at party’s Secretariat, Acme road, Ikeja, on Wednesday.

An aggrieved Emiabata said that during the Forum that lasted for hours, there was no special recognition of the other parties in the merger as the whole process was dominated by the defunct ACN leaders, describing the process as undemocratic.

“We are not going to leave the party for them”, said the factional APC Chairman, stressing that, “We are still members of the party. We’re going nowhere because we’re part of the merger. The fact that you’re majority doesn’t mean you shouldn’t recognise us. We’re not asking for equal right, but we want to be recognised.”

Emiabata called on his members across the state to boycott the forthcoming Congress, which starts on Saturday, April 5 and ends with National Convention on Saturday, May 24, 2014, until there is harmonization or template on the merger.

“We are not bothered whether it’s going to be effective or not, we are making a statement, no harmonization, no congress”, he added.

“Since Saturday, May 11, 2013, the Lagos State CPC along with other states in the Federation met at the National Convention and considered the motion to merge with other political parties namely, Action Congress of Nigeria (ACN), All Nigerian Peoples Party (ANPP) and adopted the name All Progressives Congress (APC) as a common party.

“Thereafter, interim National Executive was put in place at Abuja where it was agreed to have a state harmonization Committee across the federation which was constituted by all Legacy parties but in Lagos State, the committee was never inaugurated by the officer saddled with the responsibility, Otunba Niyi Adebayo, who conspired with the leadership of defunct ACN in Lagos State not to carry it out.

“Sadly, our case in Lagos State is terribly different. The party structures of defunct ACN led by Otunba Oladele Ajomale not only reconvened in the name of APC but operates solely and take decisions independently of the other legacy parties especially the defunct CPC on behalf of APC in Lagos State.

“This unfortunate incident nearly marred the party membership Registration Exercise but the State Leadership of the CPC calmed the storm in order to ensure the success of the merger that produced APC with passion.

“I hereby direct all leaders, officers and members of the defunct CPC in APC to submit themselves only to my authority as the Chairman of APC in Lagos, and affirm the total dis-association of Lagos APC from Otunba Oladele Ajomale’s unilaterally organized ward Congresses for Saturday 5th of April, 2014 across 376 wards of Lagos State.

“Finally, I call on all party members to remain calm, steadfast, and continue with their normal party business and to await further directives and developments,” he declared.

Speaking with P.M News on the development, the interim Assistant Publicity Secretary of the party, Chief Funsho Ologunde said that the party is not aware of its faction nor opening a new office anywhere in the state.

He however said that the leadership of the ACN is aware that some people were aggrieved and has explained to them and encouraged them to participate in the ward congress.

“We are not aware of any faction of the party anywhere in Lagos or opening a new secretariat, but we are aware some members are not happy. Some people are afraid of participating in congress because of the fear of not winning an election. Nobody is going to sit down at home and win an election, therefore, everybody is going to participate in the congress.

“There is not going to be an anointed candidate. What the party is frowning at is that some people cannot stay away from the congress and claims to be anointed. So the leadership of the party has called on those that are aggrieved, explained to them and encouraged them to participate in the ward congress,” he said.