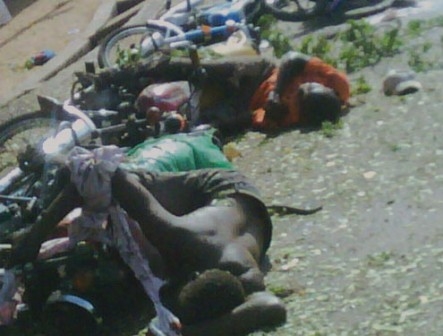 Seventy one people were killed and 124 sustained different degrees of injuries on Monday morning, following bomb explosion which affected sixteen luxury buses and 24 other vehicles at Nyanya Park on the outskirts of capital city, Abuja.

Earlier before the bomb blast, the bubbly Nyanya Motor Park, was crowded with workers and people waiting to board vehicles to their different places of work and offices in Abuja.

Soldiers and bomb disposal experts, who later came to rescue the situation, have cordoned off the area over suspicion of an undetonated bomb, while people were warned not to move near the explosion scene, while nine ambulances were seen carrying dead bodies.

The spokesman of the National Emergency Management Agency, Manzo Ezekiel, speaking on the bomb blast said: “This morning there was an explosion at the Nyanya Motor Park and rescue teams are already on ground."

“There were so many people there at that time, so we think there must have been some injuries," Ezekiel said.

No organisation or body has claimed responsibility for the attack.

Meanwhile, President Goodluck Jonathan has cancelled his planned visit to Ibadan. He had paid visits to victims of the bomb blast admitted in various hospitals in Abuja.

Nyanya Park, which is a major spot for travellers out of Abuja city, has also become the most popular entry port to Abuja.

Passengers travel to Akwanga and Lafia in Nasarawa, Benue, Plateau and other northern locations from the motor park, while it also servers as park for workers coming into the city.

Intra-city buses called el-Rufai, also converged there to transport workers into the city, while Akwanga expressway, which passes through Nyanya, remains the only route to the capital city from the East. Though the FCT authorities said it was building alternative roads, none exists so far.

“I was waiting to get on a bus when I heard a deafening explosion then smoke. People were running around in panic,” said Mimi Daniels, who works in Abuja. Another blast followed, she said.

There was no immediate claim of responsibility but suspicion is likely to fall on the militant group Boko Haram. The Islamists have been waging an increasingly bloody insurgency in the northeast.

The Boko Haram militants killed at least 135 people in attacks on several villages in northeast Nigeria late last week. Eight people were killed in a separate attack at a teacher training college, witnesses said. Yesterday, in Bama area, another 60 people were killed by the militants..

Some of the survivors of the twin bomb blasts at Nyanya Bus Station, Abuja have spoken about their lucky escape.

One of them is Mr Chima Okere, a businessman.

In an interview with NAN, he said the explosions came from two white buses parked inside the Nyanya Motor Park by the gate.

“I was inside the El-Rufai (high capacity) bus as we were driving out to the highway we heard the explosion from the two buses. I saw so many people dead; some with their limbs dismembered from their bodies.

President Jonathan at the Asokoro General Hospital to console the injured. AFP

“I was lucky, I do not know how I survived. So, I thank God for my life as very many were not so lucky,’’ Okere said.

Another survivor, Ms Charity Enang from Cross River, said she was inside a coaster bus when the blast occurred.

“All we heard was `boom’ and I saw people’s flesh flying out of the window of the bus.

“I couldn’t stand after I fell in the bus but one man carried me out of the bus and took me to an ambulance that brought me to Nyanya hospital,’’ she said.

A relative of a survivor, Mr Friday Attah, a driver, who lives in Mararaba, Nasarawa State, told NAN that his brother’s cab was damaged by the blast.

“Somebody called to inform me that they saw my brother at Nyanya hospital and I am thankful to God that he is stable and alive,’’ Attah’s relative said.

The Force Public Relations Officer, CSP Frank Mba, said 71 people died, while 174 others were injured in the explosion which occurred at the rush hour.

Nyanya bomb: the dead on the floor. AFP

Dr Adetohun Osotimehin, the Chief Medical Director of Maitama General Hospital, told the News Agency of Nigeria (NAN) that 14 dead and 27 injured people were brought into the hospital.

She said that two others who were in critical conditions would be transferred to the National Hospital for treatment.

She promised that the hospital would do everything within its capacity to ensure that those alive were given proper care.

The authorities of Wuse General Hospital confirmed that 15 dead people were brought into the hospital.

Vehicles burning after the bombing of Nyanya Park

Mr John Nimzing, the Head of Mortuary attendants in the hospital, told NAN that 11 people were brought in dead while four died on arrival at the hospital.

At Asokoro General Hospital, the Chief Medical Director, Dr Amodu Abubakar, said 27 bodies were deposited in the hospital morgue, while 25 people were receiving treatment for their wounds.

He, however, said that more victims were still being brought to the hospital.

He advised relatives of the victims to visit the hospital information centre to obtain information about their relations.

At the National Hospital, Abuja, 15 bodies were reported to have been deposited at the hospital morgue while the number of casualties was not known.

No fewer than 40 casualties were receiving emergency treatment at the hospital.

Dr Yakubu Bukar, Consultant, Accident and Emergency, Garki Hospital, confirmed that one injured person was brought to the hospital.

He told NAN that the injured, Chima Okere was attended to upon arrival and found not to be in critical condition. According to him, the person sustained injuries at the back of his head and required several stitches.

Bukar said Garki Hospital was a private hospital so victims were not brought in to the clinic except for those whose relatives could afford the bill.

Dr Frank Idekwu, the Chief Medical Director of the hospital, said scores of the wounded were referred to other hospitals for further medical attention.

The hospital, located less than 200m from the scene of the explosion, was the first port of call for those who sustained injuries.

“For those without open wounds we did a quick examination and asked them to report another day,’’ he said.

Idekwu said the hospital had compiled a list of all persons treated and on admission at the hospital.

He advised those whose relatives had yet to be accounted for to verify from the hospital.

Meanwhile, the hospital, which is designed for women and children, has become a bee-hive of activity as relatives, friends and families combed the wards in search for their loved ones.