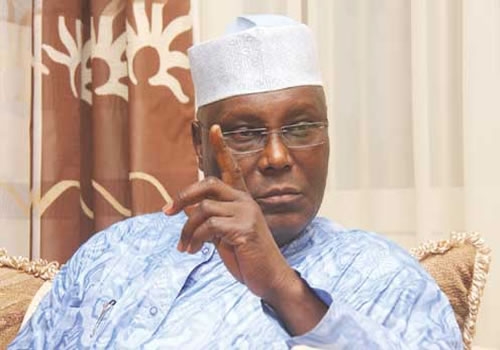 preparations for the 2015 general elections gather momentum, former Vice President Atiku Abubakar on Friday concluded his nationwide consultative meetings with political associates and stakeholders, with that of the North-East geo-political zone in Bauchi State.

Saturday Tribune gathered that majority of the delegates who spoke at the consultative meeting held at the Zaranda Hotel in Bauchi rejected the idea of the former vice president’s continued stay in the Peoples Democratic Party (PDP) and urged him to declare for the APC without further delay.

There were strong indications on Friday that barring any last-minute changes, Atiku may formally dump the ruling PDP for the main opposition APC next week, as all necessary arrangements have been put in place for his open declaration.

A close associate of the former president told the Saturday Tribune in confidence that Atiku’s resolve to defect to the APC was based on the responses from his supporters and associates during the just concluded consultative meetings; that stakeholders in the six geo-political zones of the country as well as the meetings he held with other stakeholders in the Diaspora favoured his leaving the PDP for APC.

The source said, “It is no longer a rumour that Atiku will dump the PDP for the APC. As we speak now, all is set for his official declaration for the APC. He has just concluded his nationwide consultative meetings with all the stakeholders, and the message from all the sources is ‘Turaki, dump PDP for the APC’. The message is very clear.”

According to him, the stakeholders supported Atiku’s defection to the APC following a thorough appraisal of the political situation in the country.

It was gathered that when the matter was put to the vote, as was done in previous meetings, APC enjoyed 88 votes, against 10 by the Peoples Democratic Movement (PDM) and two by the PDP.

Atiku told his associates and stakeholder at the venue of the meeting that the consultations were as a result of the recent visit of the APC leadership to him as well as the invitation extended to him to join the party and salvage the nation’s  democracy.

While thanking them for standing by him in “victory and in defeat” over the years, Atiku said “You are the foot soldiers who will get the votes. You are central in our political process, and that is why I have to come and consult with you in helping me to take perhaps the most difficult decision of my political life.”

Spread the love
Oye Gureje: A Scholar As A Rhotacist, By Remi OyeyemiSpread END_OF_DOCUMENT_TOKEN_TO_BE_REPLACED
Previous Post Reminiscences Of Nigeria-Akintokunbo Adejumo
Next Post It is legal to marry your Dog in California-Honeymoon Montana where bestiality is legal.Signs that we are in the End Times