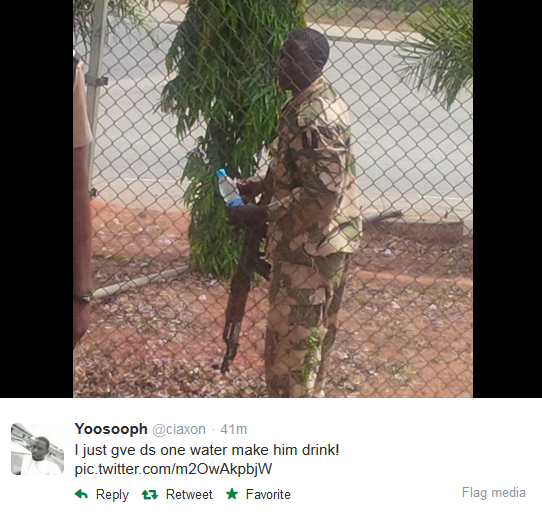 Amnesty International urged the Nigerian security forces Friday to disclose the whereabouts of a man who was arrested after tweeting pictures of an attempted jail break at the headquarters of the intelligence agency.

“If he is in detention, the Nigerian authorities must either charge him with a recognisable criminal offence or release him immediately,” Amnesty said.

The attempted jail break at the headquarters of the Directorate of State Services on March 30 sparked a gun battle that killed 21 detainees, the intelligence agency said.

soldiers taking cover at SSS HQs on 30 March: one of the photos tweeted by by ‘Yoosooph’

Onimisi, who works for a national electricity firm, has been arrested and held incommunicado for 11 days, his family said on Thursday.

The head of the National Human Rights Commission, Chidi Odinkalu, told AFP that his office was investigating the alleged disappearance of the 32-year-old man.

“He has been arrested for 11 days without any information being given to the family…. The family has been kept in darkness. If you are holding him or if there is to be a sentence of death, then tell the family,” Amnesty quoted Sanusi Onimisi, the man’s brother, as saying.

Reports suggested Boko Haram militants were among the detainees trying to escape, but there has been no official confirmation of the group’s involvement.