Osoba on his way out APC to political irrelevance leaving the future of his son in APC hanging. 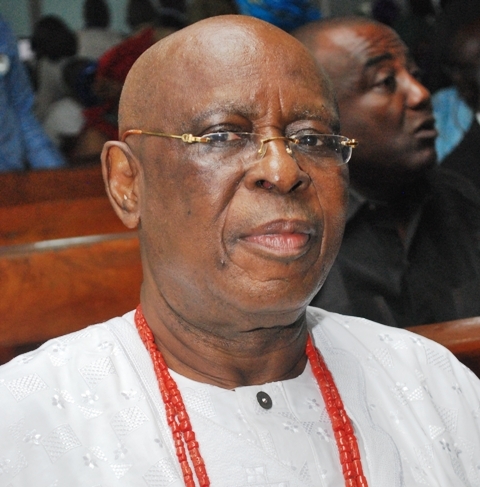 UNDOCUMENTED understanding to cede party structures to governors in states controlled by the All Progressives Congress (APC) led to the loss of party heavyweights in the struggle for power in the party,

In the 16 states under the control of the largest opposition party, only one, Lagos, is reportedly exempted from this unwritten code.

This explains the total control the national leader of the party, Senator Bola Tinubu, exercises over the party in the state, despite Governor Babatunde Fashola’s membership.

The unspoken code is also explainable for the decision of the party leadership to recognise factions of state executive committees loyal to the incumbent governors.

Struggles between governors and party heavyweights like former Ogun State governor, Chief Olusegun Osoba; his Borno State counterpart, Ali Modu Sheriff, among others, for the control of party structures in their states had seen parallel executives emerging during party’s ward, local government and state congresses.

In all the states where factions emerged, governors’ loyalists had the last laugh, with aggrieved chieftains who had been pushed to the sidelines either leaving or threatening to leave the party.

Even before the congresses, those who had seen the handwriting on the wall, like Dele Belgore in Kwara, Ibrahim Shekarau in Kano, Buba Marwa in Adamawa and Attahiru Bafarawa in Sokoto, had exited the party into the Peoples Democratic Party (PDP).

In the South-West, the crisis of leadership led to the exit of Honourable Opeyemi Bamidele; two senators in Oyo State, with the most pronounced of the crisis in Ogun State, where all the three senators and almost all members of the House of Representatives from the state joined Chief Osoba to wage war against the governor.

Talks of their imminent departure from the party are, however, everywhere in the polity.

A senior party revealed  that the party leadership had given up on persuading Osoba and his supporters to stay in the party.

The source said the party’s solace was that National Assembly members, either senators or members of the House of Representatives, have no structure they can claim as their own, adding that their exit from the party might be of little or no effect.

The source pointed out that in all the states in the South-West, the governors control the party’s structures, wondering why Ogun’s should be different.

Osoba had earlier accused the party of insincerity in the handling of its conflict-resolution mechanism, calling the elders’ forum, which was asked to mediate between him and Governor Ibikunle Amosun, a hoax.

When the source was reminded that Osoba and Tinubu are contemporaries and the privileges being enjoyed by the former Lagos State governor should be extended to his Ogun State counterpart, the source went philosophical by saying “providence had placed both men in two different positions in the party,” while admonishing Osoba to accept that reality.

According to the source, “when Chief Akande was chosen as the Secretary to old Oyo State Government in 1979, where was Tinubu? When General Buhari was head of state in 1984, where was Tinubu? He met a lot of us in politics, but where he is today is where God wants to place him. The reality should be accepted. If we had a governor in Katsina, would he say he wanted to be the leader of General Buhari?”

The source further disclosed that the party had accepted the reality of the imminent exit of some heavyweights and already preparing for how to campaign for a replacement of the votes that would be lost to their exit.

For those proposing to exit the party, especially in the South-West, the source could only pity them, while singling Osoba out for not realising that “those older than his son, Olumide, were denied the House of Representatives’ ticket he currently holds.”

The informal ceding of the control of the party to the governors also reportedly led to the inability of Alhaji Kashim Imam to garner enough support to stand for election as the national secretary of the party.

A party chieftain said that Imam was more known as an ally of Modu-Sheriff, a known political enemy of Governor Kashim Shettima of Borno.

Imam, also from Borno, was the governorship candidate of the Peoples Democratic Party (PDP) and lost twice to Modu-Sheriff, reportedly his main backer for the national scribe job.

Though the post was zoned to the North-East, Shettima had reportedly rallied other APC governors from the zone to force Imam out of the race, after it was glaring that he was going to lose the election which could further demystify him politically.

There are also suspicions in the party about the perceived friendship between President Goodluck Jonathan and Modu Sheriff.

This reportedly accounted for massive mobilisation against all those he supported for party positions at the national level, particularly Chief Tom Ikimi for chairmanship and Imam for secretary.

Spread the love  “Life’s most persistent and urgent question is, END_OF_DOCUMENT_TOKEN_TO_BE_REPLACED

Previous Post Fayose Shares 30,000 Bags of Rice to Students, Market Women
Next Post THE VITUPERATIONS AND BITTERNESS OF THE ALL PEOPLE’S CONGRESS …by Femi Fani-Kayode