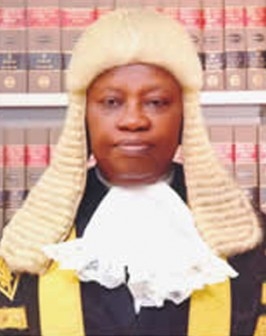 The National Judicial Council, NJC, the apex disciplinary body for the Nigerian judiciary, under the leadership of the Chief Justice of Nigeria, CJN, Justice Aloma Mariam Mukhtar, has sacked two judges for gross misconduct.

The judges are, Justice Gladys K. Olotu of a Federal High Court in Abuja and Justice U. A Inyang of the FCT High Court, also in Abuja. The NJC recommended for their compulsory retirement from office.

The Council observed that following allegations contained in a petition against Justice Olotu, that it found that she failed to deliver Judgment in a case at the appropriate time only to deliver it eighteen months after the adoption of final address by all the counsel in the suit. This is contrary to the constitutional provisions that judgments should be delivered within a period of 90 days.

“The Hon. Judge admitted before the Fact Finding Committee of the Council that investigated the allegations, that she forgot she had a pending Ruling to deliver in an application for Joinder, and that the Judge entertained a post Judgment matter in Suit No. FHC/UY/CS/250/2003 in Port Harcourt after delivering Judgment, which made her functus officio” the NJC explained in a press statement issued by Mr. Soji Oye, the Council’s Acting Director (Information).

It also stated in another case with Suit No. FHC/ABJ/CS/505/2012, that Justice Olotu failed to deliver judgment twice.

In the case of Justice Inyang, the Council found that the Judge included in his Judgment, references to the Garnishee Proceedings, which came after the Judgment had been delivered on 20th December, 2011 and also included the name of a counsel who came into the matter after the judgment was delivered.

It also noted that before delivering his Judgment on 20th December, 2011, that the judge ignored a properly filed Motion on Notice for leave to file additional witness Statement on Oath. These conducts contravene these judges oath of office.

In a similar exercise of its disciplinary powers, the National Judicial Council has also issued warning letters to Justice Dalhatu Adamu, who is the Presiding Justice of Court of Appeal Kaduna Division, Justice A. A. Adeleye of Ekiti state High Court and Justice D. O. Amaechina of Anambra state High court respectively.

While the duo of Justice Adeleye and Justice Amaechina were found culpable of very low performance and were cautioned for decline in their productivity.