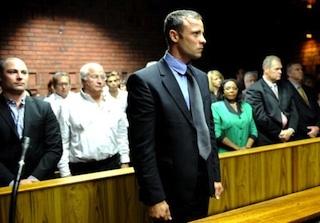 Lawyers for Oscar Pistorius called a forensic pathologist to the stand Monday to open his defence in the trial over the murder of South Africa model, Reeva Steenkamp, his girlfriend.

The star athlete is expected to testify thereafter.

Barry Roux called former state pathologist Jan Botha, who has carried out about 25,000 autopsies, to testify. Pistorius is expected to follow.

Roux said he will call 14 to 17 witnesses in his case to testify on ballistics, urine emptying, damage to the toilet door, sound, and “disability and vulnerability.”

Earlier, the state called forensic pathologist Gert Saayman who said vegetable matter in Steenkamp’s stomach suggested she ate around two hours prior to her death at 3:17 am, an event that conflicts with Pistorius’s version of events.

Botha, a tall man wearing black-rimmed glasses and a charcoal grey suit, disputed this conclusion, saying that determining the time of death through gastric emptying is guesswork, calling it a “highly controversial and inexact science”.

Pistorius bent down in the dock plugging his ears with his fingers as Botha gave testimony about Steenkamp’s cause of death.

Contradicting the state’s account, Botha said Steenkamp was first shot in the hip, then in the arm. The third bullet hit her hand and the fourth hit her head, he said.

The state said Steenkamp was first shot in the hip, that the second bullet missed, the third bullet hit her arm, and the fourth went through her hand and head.

Later Pistorius is expected to tell the court his first-hand account of why he shot dead his model girlfriend Reeva Steenkamp in the early hours of Valentine’s Day in 2013.

Pistorius has cut a lonely figure since his trial started on March 3, saying little since his “not guilty” plea besides the occasional “yes, milady” to Judge Thokozile Masipa.

How the double amputee known as the “Blade Runner” will hold up during the state’s cross-examination may prove a turning point in the case.

In the five weeks since the trial began, Pistorius has appeared fragile and annoyed, frequently crying in court and being physically sick when the gruesome details of Steenkamp’s death were discussed.

Pistorius, who denies murder, has to explain why he fired four shots at Steenkamp through a locked toilet door at his home.

To do this, he has hired an extensive team of forensic experts to describe the events in the early hours of February 14, 2013, including an American animation firm that will visually depict the crime scene using three-dimensional computer generated images.

The experts will have to cast doubt on the state’s version of events, including testimony from witnesses who said they heard a woman screaming on the night of the murder, which would show Pistorius knew his target was Steenkamp.

Pistorius says he shot his girlfriend through a bathroom door after mistaking her for an intruder.

The judge adjourned the trial a week ago after a judicial assistant fell ill. Media interest in the case has slowly been declining, but Pistorius’s testimony is likely to grab global headlines.

The trial is slated to run to at least mid-May.

Spread the loveOf all the updates that have been given END_OF_DOCUMENT_TOKEN_TO_BE_REPLACED

Previous Post It is official, Nigeria is Africa’s biggest economy
Next Post THE STRANGE DREAM OF A MUSLIM/MUSLIM TICKET (PART 2)- FEMI FANI-KAYODE