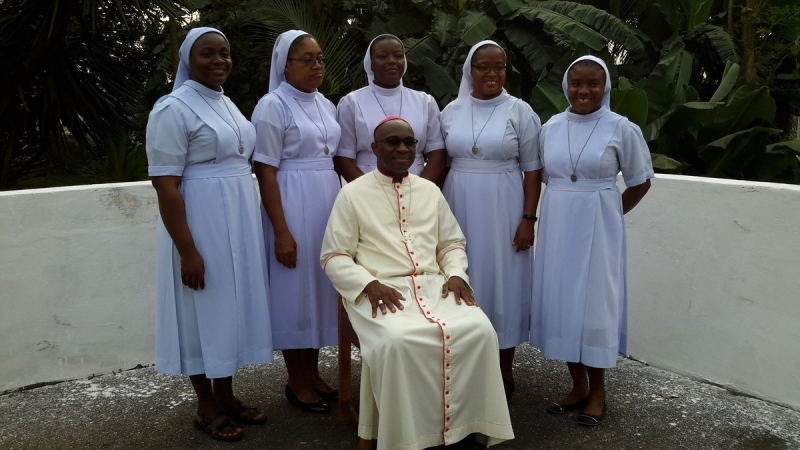 On July 13, 2019, in Providence Rhode Island,( United States), Our Lady of Fatima & St. Francis High Schools Alumni Association Honored His Grace Bishop Andrew Jagaye Karnley of the Cape Palmas for the outstanding contributions he has and continues to render to the people of Maryland County, especially in the areas of Education, Health and the effective operation of the diocese. Also, Monsignor Melvin Nyanti Gaye and Rev. Sr. Edith Wallace, BSN, B.Sc., in the recognition of their outstanding leadership, dedication and hard work in the Cape Palmas Diocese, Catholic Church of Liberia.

Bishop Andrew Jagaye Karnley is the son of the late Samuel D. Karnley and the late Ma Hawa Fefe Sando. He was born on April 26, 1967 in Jawajeh Varney Bohn, Bomi County, North-Western Liberia. 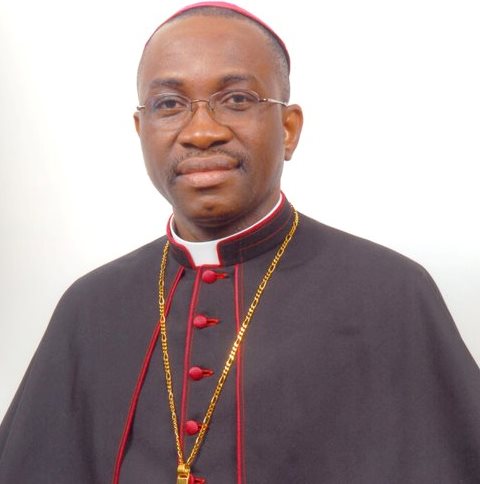 From 1977 to 1982, Bishop Karnley was brought up by Rev. Fr. Garry Jenkins, SMA at St. Dominic Catholic Mission in Tubmanburg, Bomi County. There he was baptized and received his First Holy Communion on December 24, 1977. He was confirmed there by the late Archbishop Michael K. Francis. It was during his stay with Fr. Garry Jenkins that he was inspired to become a Roman Catholic priest.

He attended St. Dominic Catholic school in Tubmanburg from 1977-1981. After completing his elementary education, Bishop Karnley enrolled in 1982 at the Pope John XXIII Minor Seminary, East Harper, Maryland County. While at the minor seminary, he attended Our Lady of Fatima High School in Harper City from 1982 till his high school graduation in 1986.

Upon graduation from the minor seminary and Our Lady of Fatima High School, Bishop Karnley enrolled at St. Kizito Pre-Major Seminary, Kenema, Sierra Leone, in 1987 to do a year of spiritual formation. After a successful completion of this program, he returned to Liberia and matriculated to St. Paul’s College Seminary, Gbarnga, where he began his studies in Philosophy. Due to the outbreak of the civil war in Liberia in 1989, the seminary 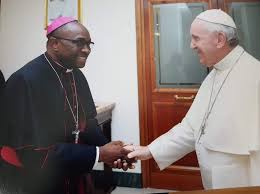 After a successful completion of his studies in philosophy, Most Rev. Andrew Jagaye Karnley returned home in order to do a year of pastoral orientation. He was subsequently assigned to various parishes in the Archdiocese of Monrovia, namely: Sacred Heart Cathedral, Our Lady of Lourdes Parish, and St. Anthony Parish. He also taught Religious Education at St. Mary Catholic High School for the academic   year of 1991-1992.

Bishop Karnley returned to Sierra Leone in 1992 to continue with his priestly formation with emphasis in the study of theology.  Due to the civil war which was prevailing in Sierra Leone, he and his fellow seminarians were transferred to St. Peter Regional Seminary in Cape Coast, Ghana in 1993. There he completed his theological studies and formation for the priesthood in June 1995.  Bishop Karnley was ordained a priest in the Sacred Heart Cathedral on July 9, 1995 by the Late Archbishop Michael Kpakala Francis.

In February 2005, Most Rev. Andrew Karnley was appointed Apostolic Administrator Sede Plena of the Archdiocese of Monrovia, a post he held until November 2009.  In 2007 he was appointed an honorary chaplain 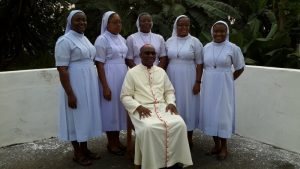 to Pope Benedict XVI with the title of monsignor.

Bishop Karnley has had the opportunity of furthering his studies. From 2002-2003, he earned a diploma in Spirituality and Psychology from the Institute of St. Anselm in Kent, England.  In 2010 he enrolled at the Pontifical Gregorian University in Rome to do graduate studies in Church History. He however discontinued his graduate studies when he was appointed Bishop of Cape Palmas by his Holiness Pope Benedict XVI.

Bishop Karnley was ordained the second bishop of the Diocese of Cape Palmas on April 30, 2011 in the St. Theresa Cathedral in Harper, Maryland County.

The Diocese has a Health Coordinator, under the supervision of Rev. Sr.  Edith Wallace.  She operates the Health Secretariat; which has five clinics and on mobile unit under its jurisdiction.

The Catholic Health Secretariat is one of the social and service arms of the Diocese of Cape Palmas. It supervises and coordinates all health activities in the Diocese. The CHS (Catholic Health Secretariat), is responsible to upgrade and expand existing health programs, facilities, establishing of new ones where possible (upon the request of the communities), formulation of health programs as prevailing conditions, situations and resources permit. The CHS is also to mobilize resources for the smooth operation of the health secretariat and its health facilities.

CHS Cape Palmas has a total number of eighty-five employees, including the staff of the Health Secretariat.

Name of clinics and their locations: Southeastern Region of Liberia

·       Treatment of special cases of Tuberculosis and Leprosy.

·       Voluntary Counseling and Testing for HIV/Aids at the St. Francis and Sacred Heart Clinics.

Brief History about the Diocese of Cape Palmas

·        February 2, 1950: Established as Apostolic Prefecture of Cape Palmas from the Apostolic Vicariate of Liberia

The mission of Our Lady of Fatima & St. Francis Alumni Association   is   committed to the education of the students enrolled at Our Lady of Fatima and St.  Francis High Schools and to maintain fraternal relationships among former students and faculty, in Maryland County, Liberia.  The association is also determined to support and sustain the educational efforts at the two schools in the areas of scholarship, supply of education materials and up- keep the maintenance   of the physical structures of the buildings.

Mr. Alfred L. M. Gezaye is a Journalist. He is a prospective graduate of the University of Liberia with BA Degree in Political Science. He is the Managing Editor of the Christian Newspaper and can be contacted at: [email protected]