Femi Adesina of Buhari is a confirmed Buffoon 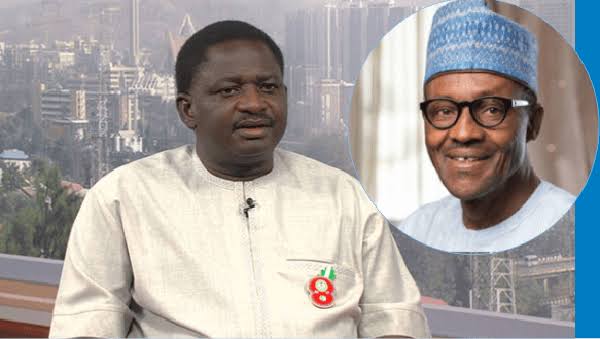 A buffoon is one who acts in a silly or ridiculous fashion; a clown or fool .

Yes, Femi Adesina is one of the biggest clowns in this clannish government of the clown called Buhari. Femi has never hidden the fact that he is a buffoon but since the passing of the legendry Abba Kyari, the prisoners have taken over. In the days of the legendry gatekeeper ,Abba Kyari, this buffoon called Adesina was never allowed out of the gate in the fashion we witness these days. The gate was very secure. The highly cerebral Abba kept the gates under lock and key to avoid the dramas that we witness since Covid19 took him away from us. . At Aso rock of today, there is no gatekeeper. The prisoners are in charge of the prison system and the prison itself

Let us take a look at his latest salvo in his attempt to polish his dirty and piggish boss. In this childish and buffoonish piece titled ‘PMB: Kind to the living and the dead ‘. Femi put in writing what every one had accused this government of all along.

We all know that Buhari’ government is suffocating in the swamp of favoritism, cronyism, and nepotism. Everything that Femi put out there to polish his boss falls under any of these crimes.

In order to make this clearer, let us define each of the three crimes above in layman’ terms

According to Aristotle, “equals should be treated equally and unequals unequally”. This principle of equality states that individuals should be treated the same, unless they differ in ways that are relevant to the situation in which they are involved. In the public sphere, favoritism, cronyism, and nepotism also undermine the common good when someone is appointed to a position based on connections rather than because he or she has the best credentials.

Favoritism: Act of being unfairly partial

Cronyism is a more specific form of favoritism, referring to partiality towards friends and those who did us favors in the past

Nepotism is an even narrower form of favoritism. This was coined from the Italian word for nephew– Tunde , the nephew of Buhari fits this perfectly

Let us read Femi Adesina verbatim on the piece-“ PMB: Kind to the living and the dead”

“Examples abound of many people serving in government today, who are there at the behest of the President. Their paths had crossed at one time or the other, they did him a good turn, showed him loyalty, faithfulness, and many years later, one good turn deserved another.

In 2003, his first shot at the country’s number one seat, the electoral umpire gave victory to Olusegun Obasanjo of the People’s Democratic Party, over Muhammadu Buhari of the All Nigerian People’s Party, ANPP. Buhari and his party went to court, and the Court of Appeal upheld the electoral victory of Obasanjo, the then sitting President.

But there was a man who gave a dissenting judgment. He was Justice Sylvanus Nsofor, from Oguta, in Imo State. In nullifying the election results, he declared: “I find that the substantial non-compliance with the mandatory electoral law amounts to no election. I also find that there was violence perpetuated by President Obasanjo. May Nigeria never and never again see a black Saturday like April 19, 2003.”

Justice Nsofor is Igbo. Buhari is Fulani. But justice knows neither race nor ethnicity. He ruled according to his conscience, though it was a minority judgment, which did not succeed in overturning the election results.

But what did Buhari do? Fourteen years later, when Nsofor was 82, and long retired, the President nominated him as Ambassador, and posted him to the United States of America. The Senate first balked, citing the man’s age, but the President re-presented him. Eventually, Justice Nsofor served in America from 2017, and died in 2020. Two times I met with him in the USA. What always struck me was his firm, strong handshake, and the quality of his mind. If you are healthy and strong, age does not truly matter. Age doesn’t mind, if you don’t mind it, goes the saying.

A second example. Another jurist, this time, of the Supreme Court. George Adesola Oguntade. In 2007, Candidate Buhari felt shortchanged again, in the election in which Umaru Yar’Adua was declared winner. The victor himself confessed that the election was flawed. The case went as far as the Supreme Court, where the majority ruling gave victory to Yar’Adua and the PDP. But Justice Oguntade would have none of it. He upheld Buhari’s appeal, cancelled the polls, and ordered a rerun. But it was also a minority judgment.

What did Buhari do again? Ten years later, with Oguntade long retired, the President picked him as High Commissioner to the United Kingdom. Showing kindness to the living, and rewarding their good deeds.

Many other of such examples abound, but let’s go to the flip side. Showing kindness to the dead.

In his first outing in 2003, Buhari ran with the former Senate President, Dr Chuba Okadigbo, as vice presidential candidate. They both challenged the result of the election, and were determined to get justice. But in September of that year, Okadigbo died. Painful.

Now, 19 years later, who has Buhari made Chairman of the NNPC Ltd Board? Margery, Okadigbo’s widow. “Blessed be he of the Lord, who has not left off his kindness to the living and the dead.”

What of Constance Harry Marshall, a relation of Marshall Sokari Harry, a political ally of the then Candidate Buhari in ANPP in 2003. A day before Buhari would flag off his campaign in Port Harcourt, Rivers Sade, Marshall, who had decamped from PDP to become National Vice Chairman of ANPP, was assassinated. Painful. And those truly behind the murder were never known.

Today, 19 years later, Constance Harry Marshall is on the NNPC Ltd Board. Yet, ignorant people say evil of this President. He’s a tyrant, wicked, unforgiving. Really? “Blessed be he of the Lord, who has not left off his kindness to the living and the dead.”

The lesson: Let us not be quick to condemn what or who we don’t know or understand. President Buhari is strict, unbending on certain issues. But wicked? Not so. In the days of Gen Murtala Ramat Muhammed as head of state, one senior military officer described him as a bully, “a kind-hearted bully.” Same with Buhari. Not a bully, but strict man with a kind heart. A man who does not forget to show kindness to both the living and the dead.

You now see why some of us have chosen to follow the President through thick and thin? “Blessed be he of the Lord, who has not left off his kindness to the living and the dead.”

After reading the buffoonish piece, the first question that came to mind was, do they still have any gatekeeper at Aso Rock that helps edit or approve what they dish out to the public Menu? This is one of the worst piece on image ‘laundrying’ in modern times. Adesina is either a Buffoon or fifth columnist. However, neither a Buffoon nor fifth Columnist should be allowed to serve in any government where sanity prevails. Since this is a government of nepotist and ‘cronyist’, Femi only confirmed what we already know. Femi is so corrupt that he does not know what corruption is all about. The adage that ‘if you work long enough in abattoir you become nose-deaf to the blood and gut’ is a truism.

Anyone who could appoint Zainab Shamsuna Ahmed ( Nee El Rufai) to sit on the seat once occupied by the likes of Ngozi Okonjo-Iweala, Olu Falae, Kalu Idika KaLu, Chief Awolowo and Adamu Ciroma , to anchor the economy of Nigeria just because she is sister to a Boko Haram sympathizer called El Rufai of Kaduna state Government’ house , is running cronyism . Look at the resume of Zainab and tell me this is not cronyism . The current coordinator of Nigeria economy has the worst resume in the history of the ministry. She is there today because she is a sibling to El Rufai of Kaduna Government’ house. Now the cost of just servicing our debt in the 2022 budget is projected for 3.9 trillion naira. That is what you get when clowns run your economy. She has the audacity to say  that ‘We Do Not Have Debt Problem, What We Have is Revenue Problem. If you have revenue problem and a very incompetent manager like Zainab, you already have a debt problem in tandem. She is too incompetent to know that when you are servicing ( not paying) debt to the tune of 3.9 trillion Naira, you have a mega debt problem . When you are using over 5% of your GDP to service debt, you should know that your economy is in trouble.

No wonder the Chinese are not picking Zainab’ phone again. Hear Amaechi -, “We are stuck with lots of our projects because we cannot get money. The Chinese are no longer funding. So, we are now pursuing money in Europe.    Even the Shylock lenders ,in the mold of the Chinese, are scared of lending money to these morons. You will recollect that  the same Rotimi Amaechi  hinted about the possibility of Nigeria forfeiting its assets to China in the event of loan default.

Finally, the goon called Adesina referred to Nigerians who attributed the loss of the supper Eagles at the AFCON to the call they took from Buhari as imbecilic. Personally , I will not take call from a serial loser like Buhari if I have such a task before me. For Adesina to refer to those who hired his boss as imbecilic shows he is just an attack dog masquerading as media adviser

However, Buhari who believes that he is owed dividends and deference by his appointees has been badly stabbed by Femi Adesina , the Buffoon.

Spread the love
Oye Gureje: A Scholar As A Rhotacist, By Remi OyeyemiSpread END_OF_DOCUMENT_TOKEN_TO_BE_REPLACED
Topics: Femi Adesina Femi Adesina and buhari
Previous Post The Plight of Liberia’s Children Classified as Zogos: Are We Really a Nation of Conscience? By Edmund Zar-Zar Bargblor
Next Post Abba Kyari And The Wicked Conspiracies – Ebun-Olu Adegboruwa, SAN