Africa’s Shameful Acts of Racism: The Plight of Persons with Albinism (PLWA) in Africa By Edmund Zar-Zar Bargblor 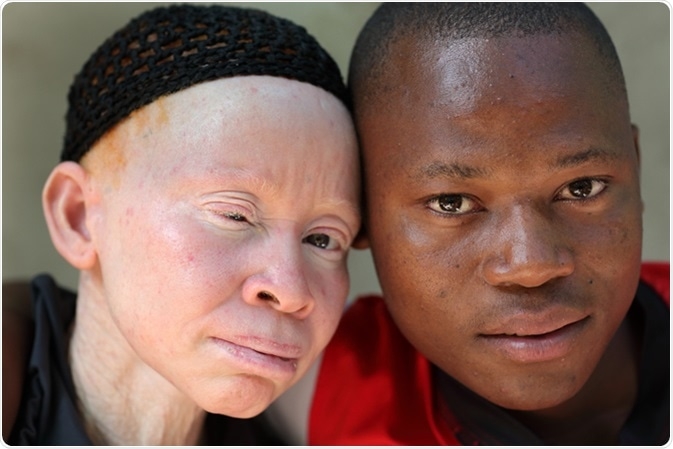 Racism is the belief that a particular race is superior to another, and that a person’s social and moral traits are predetermined by his or her inborn biological characteristics.   On the African Continent, we have seen the impact of colonialism and its attributes of racism and discrimination. The  former Apartheid system in  South Africa, and its institutionalized racial segregation was an extreme expression of European treatments of Africans. The miserable treatment of Albinos by fellow Africans is not only unfortunate, it is shameful.

The condition known as ‘Oculocutaneous albinism’ (OCA) is a

genetically inherited autosomal recessive condition and OCA2, tyrosine–positive albinism, is the most prevalent type found throughout Africa. Due to the lack of melanin, people with albinism are more susceptible to the harmful effects of ultraviolet radiation exposure.

The National Institutes of Health reported that about 200,000 Americans are affected; and around the world, it is between one in 17,000 and one in 20,000 people are albinos. However, it is prevalence in parts of Africa, but it is far higher than the global average. Albinos make up about one in 4,000 people in South Africa and perhaps one in 5,000 in Nigeria. According to a 2006 review published in the journal BMC Public Health, the prevalence in Tanzania is one in 1,400, but this estimate is based on incomplete data. Since Tanzania’s total population is more than 40 million that would suggest an albino community of about 30,000. A census is under way, however, and the Albino Association of Tanzania believes the total figure could be more than 150,000. (https://slate.com/news–and–politics/2009/01)

Albinos suffered in the hands of fellow Africans

The human rights organization Amnesty International quoted the Malawian police’s description of the gruesome murder of Mr. Machinjiri: “About four men trafficked him to Mozambique and killed him. The men chopped off both his arms and legs and removed his bones. Then they buried the rest of his body in a shallow grave.”

There are superstitions in some parts of Africa that albino body parts bring wealth, power or sexual conquest, and that having sex with a person living with the condition of albinism cures HIV and AIDS. Attackers sell albino body parts to witch doctors for thousands of dollars, according to Amnesty International. In Tanzania, some 75 albinos were reported killed between 2000 and 2016.

Also, there have been reports of albino killings in South Africa; although such crimes are less common there than in Malawi, Tanzania and Burundi. Last February, a South African court sentenced a traditional healer to life in prison for murdering a 20-year–old albino woman.

The Office of the UN High Commissioner for Human Rights (OHCHR), the UN agency that deals with human rights issues reported in 2016 that albino hunters sell an entire human corpse for up to $75,000, while an arm or a leg could fetch about $2,000”. https://www.un.org/africarenewal/magazine/december-2017-march-2018/ending–albino–persecution–africa).

In many African countries, it is sad and shameful the atrocious manner in which albinos are treated; their lives are compounded by “exclusion, stigmatization and denial of basic rights such as the right to education and health,” according to Amnesty International.  Albinos continue to experience social isolation and stigma which includes name–calling, mockery and exclusion from certain community activities.

It is reported in Zambia that at least ten albinos are murdered in ritual killings every year.  Some believe albino body parts bring wealth or luck. Those born with the genetic condition are calling for an end to this madness. There are more than 25,000 people living with the condition in Zambia. (https://www.dw.com/en/zambian–albinos–call–for–end–to–brutality/a-37320962)

Madame Janet Kakusa Wonani of Zambia, Founder/President of Light of The World Foundation. She works closely

with children with Albinism in Zambia, irrespective of limited financial support.

According to Albino Foundation of Zambia (AFZ), Executive Director John Chiti, more than 25,000 persons with albinism in Zambia are currently in need of sun screen lotion (https://allafrica.com/stories/201712280437.html).

In an interview with Africa Renewal, Ms. Ero,  said that the albino situation in Africa, “a tragedy.” She referred to the 7,000 to 10,000 albinos in Malawi and thousands of others in Tanzania, Mozambique and other countries as “an endangered people”,  facing a “risk of extinction if nothing is done.” Tanzanians call albinos zeru, zeru, meaning “ghosts.”

Superstitious mindsets in some African countries continue to seek murdered for body parts, including infants and babies. Most of the attacks have taken place in Tanzania. Murders and attempted attacks, though in smaller numbers, have also been documented in Burundi, Kenya, Swaziland, Guinea, Nigeria, South Africa, Congo, Zambia, Namibia, Ivory Coast and Burkina Faso.

The Converson.com   conducted a research and looked at media reports published between 2008 and 2011 on albinism and albino murders in Tanzania. It published a data set of 563 media reports in both English and Swahili from Tanzanian national newspapers.

The data showed that the Tanzanian press portrayed and explained violent attacks against persons with albinism in four ways. They were:

Ms. Kway–Geer, the first Member of Parliament in Tanzania with albinism described her individual testimonials, first-hand accounts of difficulties as:

“When I was at primary school, people used to laugh at me, tease me – some didn’t even like to touch me, saying that if they touched me they would get this color. People used to abuse me on the road when I took the buses to school. They would run after me – crowds of kids following me – shouting ‘zeru, zeru’. (zeru, zeru, is derogatory term) (https://www.ncbi.nlm.nih.gov/pmc/articles/PMC5767025/).

The Conversation.com has identified the following recommendations.

1.  There is an urgent need to address the violence faced by this vulnerable group. Public health awareness is an important first step.

2.   Adequate health services for skin and vision disabilities should be prioritized.

3. Putting out messages that counter the stigma against people living with albinism is also important, as is access to education.

4.  Interventions must consider Albinos’ human rights. For example, putting children with albinism in camps may protect their right to life and security, but it restricts their rights to freedom of movement, and family life.

In addition, African Governments should seriously advocate against harmful practices against albinos.  State parties should take all appropriate measures and offer support and assistance to victims of harmful practices, including legal sanctions, education and advocacy campaign to eliminate harmful practices perpetrated on persons with albinism, such as: witchcrafts, abandonment concealment, ritual killings, etc.

Pictures of African diversity provided below:

One thing for sure, the Albinos did not create themselves; they were created in the same way you and I were created by the God who doesn’t make MISTAKE. Their birth process is the same as you and I! Their mothers’ carried them for nine (9) months in their stomachs before giving birth to them. Who are we – be it an individual or government to decide that they should not live because they are different? Did God ask he needs our HELP to make His decision? The Almighty God does not need the assistance of mortal humans to run his affairs. The actions of those individuals perpetuating violence against persons suffering from albinism  are no different than King Leopold II of Belgium, Adolph Hitler of Germany, Napoleon Bonaparte of France, and White racists today.


In Genesis 1:31(NIV): “God saw all that he had made, and it was very good…” God himself said it was Good, NOT bad. God doesn’t create anything UGLY! So, why individuals, including governments are killing these innocent people? In addition, 1 Thessalonians 5:22 instructs us to “Abstain from all appearance of evil.” Accordingly, the GENOCIDE against these poor innocent people must be STOPPED!

Now, take a closer look at the beautiful tapestry of the Albinos provided here. The question that readily comes to mind is any of you better looking than the Albinos provided in these photos? I DOUBT IT! Therefore, let the persecution and killing of Albinos STOP before the wrath of God descends upon us.

Patricia M. C. Logan is the founder and Executive Director of the Liberia Albino Society echoed that discrimination, marginalization, unemployment and greater susceptibility to skin cancer are some of the obstacles encountered by people with albinism (https://news.un.org/en/tags/patricia-m-c-logan).

As Africans, it is embarrassing to read or hear that other Africans are discriminated due to   their race. Racism is contrary to God’s plan for humanity. The divisions we face today in contemporary Western nations are due to Race, the color of one’s skin or ethnic background.  And obviously, this perception is not part of God’s plan. 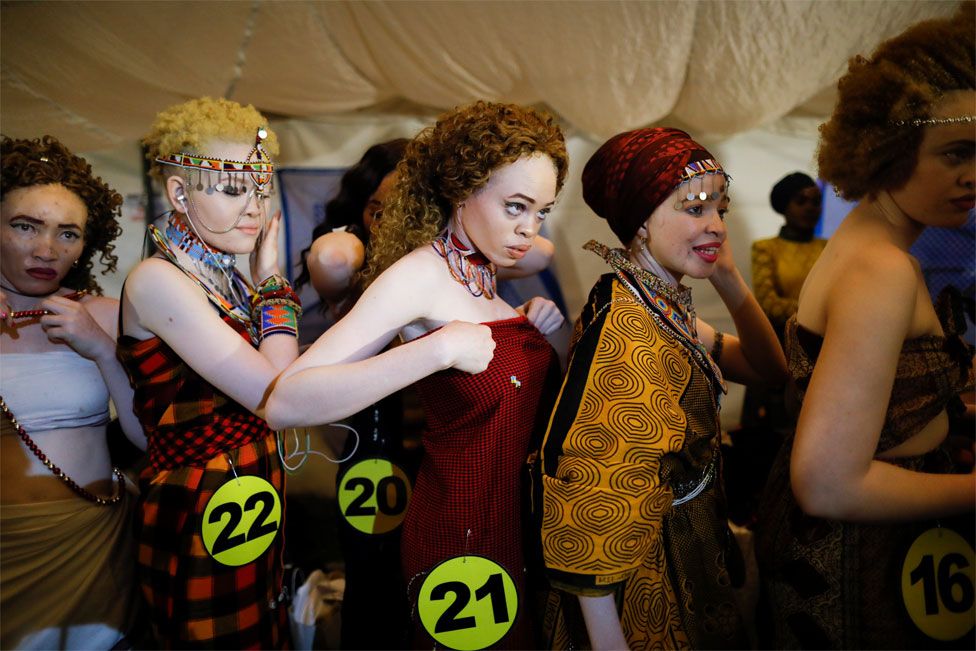 The Albinism Society of Kenya held a Mr. and Miss Albinism beauty pageant in Nairobi to support those with the hereditary condition.

In the words of Maya Angelou: “We, the black people, the most displaced, the poorest, the most maligned and scourged, we had the glorious task of reclaiming the soul and saving the honor of the country. We, the most hated, must take hate into our hands and by the miracle of love, turn loathing into love. We, the most feared and apprehensive must take fear and by love, change it into hope. We, who die daily in large and small ways, must take the demon death and turn it into life.”  Indeed, Albino Children in Africa are our brothers, sisters, daughters and sons, let us protect them always, they are all God’s children as well.

Spread the loveOf all the updates that have been given END_OF_DOCUMENT_TOKEN_TO_BE_REPLACED

Previous Post Is Treason to Demand the Weah-led Government to Step Down?
Next Post We Refuse to Accept Second Class Citizenship In the Country of Our Birth By Elder Siahyonkron J. K. Nyanseor, Sr. Jonesboro, Georgia