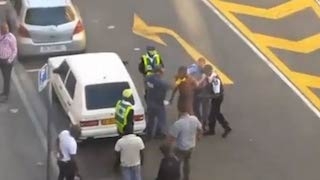 . The latest is that the two cops will be charged to court Monday

Two South African police officers who were allegedly caught on video taking part in the beating and stripping of an unarmed Nigerian on a Cape Town street have been arrested, the police watchdog said on Saturday.

The Independent Police Directorate said the officers, aged 42 and 45 years old, would appear in court on Monday on charges of assault.

The Nigerian being brutalised by Cape Town police

The Nigerian was named Clement Emekensha.

“The arrest would not have happened without the vigilance of the public,” said Moses Dlamini, the spokesman for the police watchdog.

He said other charges may be added.

In the video, a security guard ripped the shirt-less man’s trousers off and then a police officer repeatedly punched and kicked the man in the groin. Another officer held the man by the neck.

His underpants came off as the beating continued, before he was loaded into a police car.

Western Cape police said the guards had not yet been arrested.

Last year, Mozambican national Mido Macia, died after being dragged behind a moving police patrol van in a town east of Johannesburg.

Nine officers are standing trial for his killing.

Spread the love  “Life’s most persistent and urgent question is, END_OF_DOCUMENT_TOKEN_TO_BE_REPLACED

Previous Post Igbo Re, Ona Re: The Nigerian Constitution And The Awo Road Not Taken By Pius Adesanmi
Next Post The Power of Passion and Spirit of the Warrior By Femi Fani-Kayode