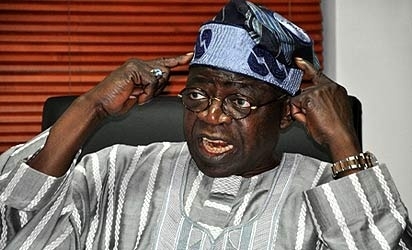 The SUN Newspaper has taken a sad excursion from journalism into the realm of gothic tales and political slander. That sheet has turned itself into a harbor of perjury and malice in telling tales by moonlight. In venturing to publish the recent story that Asiwaju Tinubu has conspired with Senator Saraki to thwart the Buhari administration, the SUN Newspaper has descended to the lowest and darkest rungs of journalism ethics. The stench of the piece and motives behind it are too noxious to ignore.

Those who midwifed this garish tale give birth not to truth but to lies intended to kill APC unity and to slowpoke the Buhari administration’s strategic reform initiatives, as earlier outlined by our party manifesto. Given the potential for change that stands before us, we are now beginning to see the true nature of many people. There are those who truly want positive change so that we can break from the ways of a stolid past. Then there are those who speak of change with their mouths but never believe in it in their hearts. They came along with us for the ride or because no other political option availed itself at the operative time. Now given the chance to redeem themselves from their past political actions, they would rather return to the political morass from whence they came.

The idea of an alleged conspiracy between Tinubu and Saraki against the President is an execrable lie. Without any proof except the veil of innuendo and some hatemongers masquerading as presidency sources, the story proclaims that the government is surveilling Asiwaju Tinubu because of his purported unhappiness about the ministerial list.

Too mischievous yet cowardly for their own good, the yarn-spinners at the SUN neglect to precisely state what terrible thing they believe Tinubu to have done. This ambiguity is in part purposeful; their villainy seeks to place the innocent on edge and to cause those who must work together if the nation is to progress to begin to doubt the bona fides of each other. With such a story, they hope to break the walls of confidence so that they may kindle mutual animus between the President and Tinubu. By getting the two to fight and weaken each other, they may then swoop down to destroy both.

If this nation is to have more than a fleeting chance of escaping the quagmire into which years of PDP misrule have taken us, we cannot allow these regressive elements to deploy their cunning tricks to divide and pit progressive against progressive.

Here, I will do those who inhabit the shadows of untruth a favor. I will state explicitly what they hoped to get the reader to infer. Their claim is that Tinubu has joined with Saraki to scuttle the President’s ministerial nominations. They have misfired.

Their wrong is a great wrong. Like the rest of us, Asiwaju Tinubu waited for the President to select his cabinet. The majority of the selections have been made. There is nothing to do but congratulate the appointees and pray for them. Their responsibilities are vast, the future of the nation now rests on their shoulders. The challenges before them are manifold and daunting. Those who want the best for Nigeria can only hope that these people succeed. The only intervention that Asiwaju Tinubu would make is one of encouragement. He would charge them to remain true to the progressive vision of the party and our President. None should allow themselves to be enticed to join league with those who would cast us back into the old mold of PDP governance: to Pilfer, Destroy and Pillage. Instead they should cohere faithfully to the enlightened programs and promises made by our party and this government.

Other than voice this encouragement, Bola Tinubu will never say a negative word or lift a finger to forestall anyone’s approval before the Senate.

For the record, the Buhari Presidency was brought to life by the votes of millions of Nigerians who desire change. Such a collective and historic achievement is not one that anyone who worked to bring it to life would easily seek to deconstruct.

This government is for the betterment of the people and the national purpose is bigger and more important that any individual’s desires.

In our journey to national betterment, plans and policies will be made, then amended. Mistakes will occur and then corrected. Achievements will be had and replicated. Through it all, Asiwaju will remain true to the progressive ideals that fueled the creation of the APC. He has devoted his political life to achieve what has been achieved. His heart is too much of the people and his mind too fixed on establishing a positive historic legacy to suffer such a cynical policy or engage in the destructive pettiness of which he is accused.

He would not toss aside a lifetime’s labor because of an alleged slight and certainly would not join with Senator Saraki in stymying this government which may just be the nation’s last best chance to salvage itself.

Given the exigencies of his position, President Buhari is placed in an unenviable position to some degree. The duties of his office give him no choice; necessity constrains him, requiring that he discourse with Senator Saraki. As party leader, Asiwaju is free of such constraints. On these matters, I know where Asiwaju Tinubu stands. He remains glued to the party decision that the manner by which Saraki captured his current seat travestied party discipline. It was a crass act of disloyalty showing that Saraki may have joined the APC on paper but has remained true to the malpractices and wrong aims of the reactionary PDP in his soul.

The alleged conspiracy is a figment. It takes at least two people to make a conspiracy. There has been no substantive communication between Asiwaju and Saraki since the latter decided to foul the integrity of the Senate and the party. To be truthful, I don’t think Saraki would care to hear what Asiwaju would have to say to him. He would admonish the Senator to treat the nomination process with dispatch, justice, fairness, transparency, and most of all with the greatest patriotism.

He would counsel Saraki to shelve his personal situation for the moment to concentrate on the people’s business. It would be a grave mistake and abuse of office for Saraki to directly or indirectly inject his personal matter into the approval process. Saraki should not link the approval of a single Minister to his desire for extrajudicial treatment of his issues.

If adhering to the decisions of the party, supporting the government’s progressive plank and working for the good of the people qualifies Tinubu for surveillance, then he will accept that. However, we know that any such surveillance is not from state security organs. Such activity would come from the insecurity agencies of the PDP and its mercenary allies elsewhere who would seek to fragment the true core of the APC so that they may scuttle the Buhari reform program and return the nation to the misgovernance of the past. They hope to delude the APC into attacking itself. By so doing, they believe they can regain through stealth, the reins of government the people seized from them through elections. They seek to break the hearts and hopes of the people. Asiwaju Tinubu would never team with anyone to gain such an inhumane objective.

While the Sun seems to have abandoned its journalistic norms, Tinubu shall remain true to his progressive ideals.

Spread the love(Genesis 50:14 (NIV) …14 For God shall bring every END_OF_DOCUMENT_TOKEN_TO_BE_REPLACED