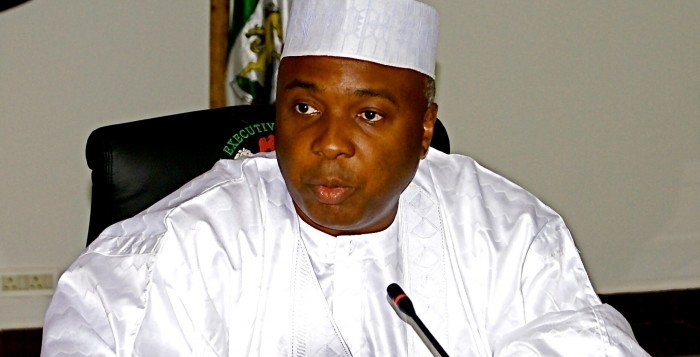 It was indicative of the earth-shattering weight of the burden that he carried, that it took Bukola Saraki almost a week, to find the words to describe the plot that he hatched against his party in the early morning of June 9th, 2015. Some of my more observant friends back home in Ilorin, noticed that he wore the same blue cap for days in a row, which some assigned even mystical reasons. But what played out on the floor of Nigeria’s Senate that morning, revealed most graphically the essential political character of a young man who has taken Nigerian politics by the scruff of the neck, in a most pitiless show of self interest, expediency, lack of defined altruistic principles but an incredible focus on achieving results, no matter how it was done! In Bukola Saraki, Nigeria finally found its most defining politician who learnt from his father how to survive the political minefield, and who surpassed the father in the deployment of a more ruthless streak that shuns all emotional strings for as long as there was an objective to attain. And with Bukola Saraki, the object has always been narrowly defined: his self interest above any other, be it community, interpersonal or national!

It was clear to all, that Bukola Saraki would give his all to win the Senate Presidency. He lobbied hard; spent huge sums of money; sent highly respected traditional rulers around and he ferried the Ulama from Ilorin to the Holy Land. Yet, there was a problem with the pursuit. Many of the leaders of the APC did not trust him and National Leader, Bola Tinubu was prepared to stop him. There had developed between the two men an unstated animosity, rooted in so many aspects of the politics of the present and the future. Everybody knew that Bukola Saraki is ambitious, some say inordinately over-ambitious. But they also underrate the capacity that he has developed to achieve those ambitions. On the eve of the last Presidential election, the APC campaign train reached Ilorin. And one of the most intriguing scenarios was Bola Tinubu’s dance and song. He heartily praised Bukola Saraki: “OMO OLE JO BABA KAMA BINU OMO” (literally, Bukola Saraki was a chip off the father, so must not be envied!). As we watched on television, a friend of mine remarked that Bola Tinubu had chosen Ilorin to dance on his own political grave! And with the events of the past month, it is clear that Bola Tinubu must be regretting the day he chose to relate with Bukola Saraki. In the lead to Bukola Saraki’s seizure of senate presidency, he had led a systematic campaign against Bola Tinubu’s perceived domineering arrogance. That campaign found traction in many quarters within the APC. In Kwara, Bukola Saraki’s sidekicks regularly rail against Tinubu on radio and even composed a song against Tinubu!

The substance of the struggle within the APC is about the direction of events in the present while the long term struggle for power in the near future is clearly embedded in the bitter fight that is unfolding. Let us be clear about it; Bukola Saraki has a long-standing presidential ambition, dating back to the years of his hegemonic influence under the presidency of the late Umaru Yar’adua. Together with his partner, James Ibori, Bukola Saraki had worked it out that he was going to be the next president and James Ibori, the running mate. The story went that Umaru Yar’adua’s state of health was not going to allow him to run for a send term. Yar’adua had also promised him (Bukola), that he would be the self-anointed successor. Unfortunately, the president died before that could take place! Bukola Saraki, who had meanwhile built up tremendous political influence and a huge financial power, was no longer going to step back from the pursuit of his ambition. So even within the vicissitudes of politics, he kept an eye on the ball, as they say in football, and was prepared to move as close as possible to the ultimate destination of one day becoming Nigerian president. His followers back home in Ilorin say it openly, that for Bukola Saraki, senate presidency is merely a stepping-stone; the ultimate goal remains Aso Villa!

But having stabbed his party in the back with a most treacherous dagger of personal ambition, what are the issues for the present? It is clear that Bola Tinubu is hurting very badly from the tenuous and temporary victory that Bukola Saraki has won in the senate. But given his antecedents, Tinubu is not likely to give up on a fight. And the indications are that the fight will be very dirty indeed. I think that Bukola Saraki is presently riding a tiger and he knows it! In the first place, he was NEVER ideologically committed to APC’s slogan of change. Bukola Saraki is too reactionary and too compromised in his personal political profile to be an apostle of positive change in Nigeria. He joined APC as a project of expediency; he correctly read the portents and knew that Nigerians were fed up with the PDP. In Kwara, there is a groundswell of feeling against the manner that he has run and frankly, ruined the state, in the twelve years of his hegemony. He stole the thunder of the opposition by joining the opposition and becoming a central actor within the APC, even when objectively, he could NEVER have bought into the vision which drives General Muhammadu Buhari. By nature, he is a PDP type of politician, and that was why it was very easy in the long run, to win senate presidency, on the basis of 49 PDP senators and only 8 APC senators supporting him. It was indicative of his most negative Machiavellianism, that despite the initial propaganda that he has the support of a majority of APC senators, he could not trust members of his party to vote for him. He chose to do a deal behind the backs of his party and the APC senators. In truth, he treacherously dealt a blow at the basic honour that was expected of a gentleman, showing clearly that he was not one.  And even when politicians in Nigeria are generally seen as not better than bandits, there was expected to be a modicum of honour even amongst bandits! Nigerian people voted out the PDP, but by subterfuge, and in pursuit of naked personal ambition, Bukola Saraki returned to the PDP to find the “unopposed” platform to achieve his personal ambition to become senate president. And in case other politicians don’t know, he has found the redoubt from where he will launch an assault on Nigeria’s presidency! It could be in 2019, depending on how President Muhammadu Buhari performs. Even Buhari in the long run, will discover just far Bukola Saraki will go in the pursuit of power and a personal ambition!

As for the platform to convey his ambition, it seems clear that Bukola Saraki will contest control of the APC from inside over the next four years. We will see what Segun Adeniyi called “Tambuwalism”, this time taken to a new height, by a scheming Bukola Saraki. He will give Bola Tinubu a real fight! One of the least known aspects of the Bukola Saraki kit of political survival is that he had studied the Nigerian terrain very carefully, in the lead to the end of his tenure as Kwara state governor in 2011. He came to the conclusion that the best option is the Tinubu option. And that consists of leaving power but installing a crony that can be trusted to be totally loyal, while the godfather actually rules by remote control. Bukola Saraki has been luckier than Tinubu in that sense, because in Kwara state, his word is literally gospel! The senate president vows openly that he would not allow his own party to dictate to him, but in Kwara state, he dictates EVERYTHING! He suspends party members for being rude to him or for disobeying his directives. It is remarkable therefore, that it was Bukola Saraki who studied the Tinubu method, but has taken the method to a higher level and has consciously chosen to give the master a fight. It is that decision to fight that is continuing to unfold inside the senate and it will go on for a long time, as the various tendencies within the APC jostle for its soul! Bukola Saraki has a fallback option; he will go back to the PDP, if in the long run, that will help him to achieve his ambitions for power. Let us recall that he started out when his father moved from the ANPP to the PDP, in search of governorship of Kwara state, in a titanic battle against the late Governor Muhammed Lawal; from the PDP, after serious crisis with President Goodluck Jonathan, he became one of the leaders of nPDP, which eventually joined the APC; the platform that renewed a flagging political life in Kwara state; and to achieve the ambition of senate presidency, he turned his back against the APC, and ran back to the PDP! The wisdom here is that for Bukola Saraki, what is constant is not idealism, principle, honour or patriotic exertions; far from it. What is constant is the achievement of a personal ambition. And whatever platform offers the greatest advantage of achieving it will be that which he will climb into power. Period!

On a final note, I think the past couple of weeks have considerably whittled the Tinubu mystique in the Nigerian political firmament. Those who want him diminished are working hard and are also gloating at his temporary misfortunes. I have NEVER met Bola Tinubu and I have written against his style on several occasions. But the CHANGE that we are all happy about today in Nigeria, has come about largely as a result of the vision and devoted political work that Bola Tinubu did with many patriots from all over Nigeria. It was Bola Tinubu’s dogged commitment, which helped to build the alliance between the North and the Southwest that could win power at the center for the first time in Nigerian history. Whatever might be his political inadequacies Bola Tinubu has made a MAJOR contribution that we cannot ignore. It is therefore imperative that all those who wish Nigeria well and have been shocked by the manner that senate presidency was hijacked by stealth, by a most reactionary individual, must not lose sight of the fact that Nigerians voted for the change they promised us. They must find the means to ensure that progressive forces rally to defend their turf and in the final analysis, defeat the reactionary forces; in senate and in politics in general!

Spread the love
Oye Gureje: A Scholar As A Rhotacist, By Remi OyeyemiSpread END_OF_DOCUMENT_TOKEN_TO_BE_REPLACED
Previous Post June and it’s disappointing tales. By Joe Onwukeme
Next Post The Agony Of Bullion Vans On Our Roads. By Joe Onwukeme