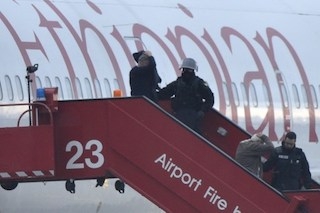 Ethiopia’s government on Monday named the co-pilot of an Ethiopian Airlines flight who hijacked his aircraft, describing him as “medically sane” and saying the incident “beggars belief”.

, and said he had been working with the national carrier for five years and had no criminal record.

“So far it is known that he was medically sane, until otherwise is proven through the investigation which is going on right now,” the minister told reporters.

“So the intention, what forced him to hijack his own plane, still beggars belief… any political, social or economic reason would not make sense to hijack your plane and be a criminal,” he said.

The minister said the passengers included 139 Italians, 11 Americans, 10 Ethiopians as well as nationals from Nigeria, Romania, France, Ireland, Germany and other countries.

The co-pilot hijacked his aircraft Monday while the Italian captain was in the bathroom and forced it to land in Geneva so he could seek asylum, police said.

The Ethiopian was swiftly arrested after scaling down a rope out of the cockpit window, and prosecutors said the chances of his demands being met were slim.

The co-pilot said he seized his chance to take over flight ET-702 from Addis Ababa to Rome by locking himself in the cockpit when the pilot went to the bathroom, police spokesman Eric Grandjean told AFP.

He told police “he felt threatened in his country and wants to seek asylum in Switzerland,” Grandjean said.

“The co-pilot told air transport authorities he had a problem with his plane and needed to fill up with jet-fuel. He then set off a distress signal indicating the plane was hijacked, before saying he had engine trouble,” Grandjean said.

The green light was not given until around 5:30 am (0430 GMT), as the passenger jet, which was first escorted by Italian fighter jets and later reportedly by French ones, circled the region.

It finally landed in Geneva at 6:02 am, about an hour and a half after it was due in Rome.

“He parked the plane on the taxiway, he cut the engines then opened the cockpit window, threw out a rope and used it to descend to the tarmac,” Grandjean said.

“He ran towards the police and immediately identified himself as the co-pilot and hijacker.”

Tagegn said he acted alone, but as a precaution all those on board were frisked as they left the plane.

The runway was crowded with police and other emergency vehicles as passengers filed out with their arms up in the air or on their heads before boarding waiting buses.

Geneva’s chief prosecutor Olivier Jornot said there were no signs of violence towards the passengers or crew.

He said Tagegn’s reasons for feeling in danger in Ethiopia were unclear, as he had not expressed any “political or other motives”, and that an asylum claim seemed unlikely to succeed.

“Technically there is no connection between asylum and the fact he committed a crime to come here. But I think his chances are not very high,” he told reporters.

Flights to and from Geneva were either diverted or cancelled during the drama, but operations resumed about two hours later, said airport chief executive Robert Deillon.

Up to 30 flights and 4,000 passengers flying during the busy ski season were estimated to to be affected, he added.

The last time a hijacked aircraft landed in Switzerland was in 1995, when a Spaniard hijacked a Majorca-Paris flight to protest at France’s Pacific nuclear testing.

All on board were unharmed, and the man was ruled to be mentally ill.

In all, 14 hijackings have occurred in Switzerland since 1969, when Arab militants seized an Israeli passenger plane at Zurich airport, fatally wounding a pilot.

One hijacker died in a subsequent assault by Israeli special forces and three others were arrested.

Spread the love  “Life’s most persistent and urgent question is, END_OF_DOCUMENT_TOKEN_TO_BE_REPLACED