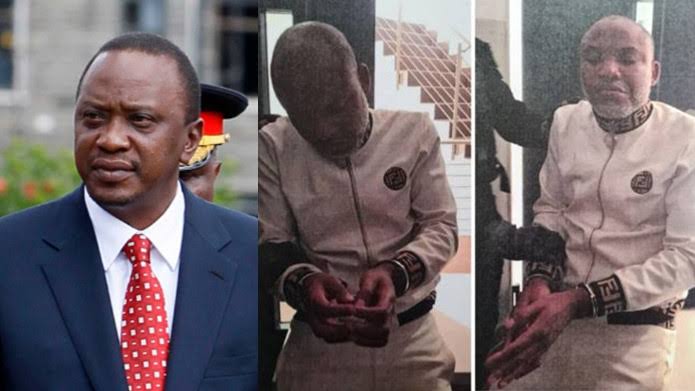 The American Veterans of Igbo Descent (AVID) just received an urgent Intel we need to explore with you bordering on the kidnap/abduction of a political activist globally known as Mazi Nnamdi Kanu – a Biafra/British citizen within your country.

AVID is comprised of Igbo ethnic men and women who honorably served or are currently serving in different Armed branches of the United States Military. Under Title 38 of the U.S. Code, a veteran is defined as a “person who served in the Active Military, Naval, or Air Service, and who was discharged or released therefrom under conditions other than dishonorable.

Veteran members of AVID are citizens from all the 50 states in the United States, born as Igbo men and women; and successfully served in the following United States Military Branches:

The organization further revealed in the letter how the agitation for Biafra began a few years after Nigerian Independence and what has transpired till now.

It also informed Kenyatta of how the Nigerian government sent its security agents to invade Kanu’s house in which people were killed in 2017, but the IPOB leader escaped.

The nation called Nigeria has never known peace since the amalgamation of the north and south by the British in 1914. You might be aware of the historic Biafran war which lasted from 1967-1970.

The war was a quest for self-determination of the Igbo people-an attempted emancipation from Fulani terrorist Muslims. Statistically, 2.5 plus million Igbo children, women, and defenseless men perished in that genocide.

Because of the gruesome rape of young Igbo girls and married women, unprovoked killings, land grabbing, massacre, maiming by the Fulani men with no accountability, Eastern Nigeria men pillaged, slaughtered en mass within their indigenous ancestral land with no consequences and grand plan by Nigeria Fulani Islamic-led Jihadist government to violently eliminate all Igbo Judeo-Christian ethnic people and repopulate our ancestral land with Fulani Muslims.

Mazi Nnamdi Kanu has been a target for assassination by the Nigerian Government. There has been the deployment of the Army to his home to kill him an operation (coded operation python dance.) His home was riddled with bullets, 25 young men were killed, but he miraculously escaped.

We are therefore upset and saddened by your collusion with Nigerian Terrorist Government to abduct/kidnap an unarmed son and a Liberation Political Activist (LPA) whom you should have protected and celebrated in support of democracy and freedom,” the letter continued.

The group went further to compare the fate of older Kenyatta whom Azikwe saved and how younger Kenyatta decided to hand over Kanu to his enemy.

A historical journey through memory lane shows that your father President Jomo Kenyatta was found guilty to be hanged by Britain because of his freedom agitation; same as Mazi Nnamdi Kanu whom you betrayed.

Dr. Nnamdi Azikiwe, the premier of Eastern Nigeria, used money from the Eastern regional government, hired local and international lawyers, came to Nairobi Kenya, and pulled out the head of Jomo Kenyatta from the British hangman’s noose. There is a street and market named in honor of your father in Igbo land.

Do you not know that this Mazi Nnamdi Kanu whom you extradited to the Nigerian hangman is related to Dr. Nnamdi Azikiwe who delivered your father from a British hangman?” The letter further said.

While closing, the group ordered the Kenyan President to find to correct his anomalies by making sure the pro-Biafra secessionist leader regain his freedom.American Veterans of Igbo Descent Understanding:

Your violent abduction and extradition of Mazi Nnamdi Kanu endangered his life for political views he shares with your late father. Your action tantamount to Ad ignorantum because you quickly forgot the help your father received from Dr. Nnamdi Azikiwe (brother of Mazi Nnamdi Kanu), and without that help, you may not have been born.

Your government hostile and violent action of MNK’s seizure and abduction within your territory is a slap on the face of all Igbo Ethnic Nationality. MNK’s abduction by your security agents has affirmed the consequence, which violates MNK’s United Nations stipulated Human Rights. How can you justify your dastardly action of kidnap and extraditing MNK to the Nigeria terrorist Fulani Muslim Cabal leadership?

Mazi Nnamdi Kanu did not violate any known Kenya law or international law. You must as a matter of urgency ameliorate this degraded condition within a reasonable time and call for the immediate and unconditional release of Mazi Nnamdi Kanu.

Thank you in advance for your esteemed response, consideration, and attention to this matter.

God bless you and God bless the Kenyan people.