MADAME JANET MWANSA KAKUSA WONANI, A WOMAN OF SERVICE, IS THE AFRICANORBIT HERO OF THE YEAR 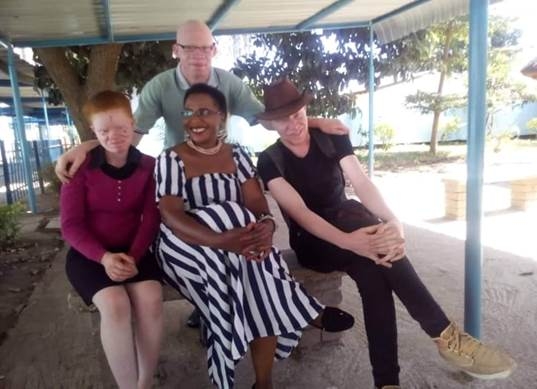 Janet Mwansa Kakusa Wonani was born in Kabwe , central part of Zambia (Southern Africa). She started her primary education in 1978 and completed her secondary education in 1989. She is a Special Education specialist. She has been an employee Ministry of General Education (MoGE) for period with twenty (20) years in service. Janet has been a foster parent of a number of children over twenty nine (29) years. She is the Founder/President of “Light of The World Foundation,” (LTWF) in Zambia. She is involved in charity works in passionately. She has raised and fostered a number of children from tender ages and has brought them up as her own with limited funds. Janet reaches and takes care of the most marginalised and discriminated Persons with Albinism (PWA), Persons Living with Disabilities (PLWD), Orphans and Vulnerable Children (OVC’s) and elderly parents

country-wide and in Tanzania. Janet has been recognized by The Zambia National Broadcasting Services (ZNBC), television for her love for PWA and features in a documentary titled “Living My Dream.”  This is as a result of being role model   of   parenting to heal and loving unconditionally PWA due to society negative perception.  Janet has been trusted to have live television presentation; to advocate for an inclusive  nation and platforms  on behalf of the marginalised underserved population of Person’s with Disability, persons with condition of albinism and orphans and vulnerable children of disabled parents on the national television/ radio stations and private radio /television station, on health talk, social protection, solutions to alleviation of poverty levels, education, inclusive jobs, Pre – Vocation skills, and accessible environment. Advocacy on “United Nations Convention on Rights of a Child,” (CRC)   in association with Zambia Civic Education Association: in collaboration with Radio Christian Voice and all local community radio country wide.

As a result of her outstanding community works and love for the vulnerable people, Janet received an award of recognition., “The Uebert Angel Foundation Award,” as Ambassador of good well by reaching  out  to the marginalised in the society and as acknowledgement of diligence in parenting to heal many children and families. Janet previously worked voluntarily as the Managing Director (MD) running a registered Non- Governmental Organisation (NGO) called, Jubilee Foundation Zambia ((JFZ). She has been involved in child find of vulnerable children with various disabilities through identification, screening, assessment and placement. As MD for JFZ she advocated for inclusive education of the vulnerable children with various special needs and sourced for their sponsorship for education. Currently she is an enrolled as PhD student at DIM St Eugene University in Zambia. She obtained her Master’s degree in Special Education at The University of Zambia in 2015. During her study as postgraduate student, Janet received the award with first position of Best Oral Presenter during the Postgraduate Seminar Week amongst other schools during paper presentation .

Training people in Health and Wellness as an Advocate

Currently she holds the position of Senior Lecturer in Special/Inclusive Education and Health/ Nutrition in ECED. She is a trained ECED Mentor by VVOB in Education Development in collaboration with Aatvelde University College and the Ministry of General Education in Zambia (MoGE). She has been a Senior Lecturer at Zambia Institute of Special Education (ZAMISE) since January 2012. As a Senior Lecturer and Teacher Trainer she has been assigned with various important tasks and assignments by the MoGE, local and international organization. Janet has contributed significantly to the MoGE and other international organization in research.  Hence forth she understands the education system in Zambia and is able to contribute effectively in the gaps. Janet is able to

work even in the harshest conditions and remotest places country wide. She understands the geography of Zambia very well as a result of assignment she has been tasked. . Janet has supervised, taught, tutored and examined students at both diploma, secondary, primary and ECE levels.  Janet has been involved in many projects in Inclusive Education Zambia by UNICEF. Jane   has contributed to research through; her Masters dissertation in 2015.She has written and published several articles in special / inclusive education, HIV / AIDS education and has participated in various numbers of consultations on special education, conference proceedings publications, research posters, paper presentation at seminars, workshops and conferences. She has also examined students at diploma in ECE, primary, secondary. She is involved in curriculum development. Janet is an affiliate and an active member Teaching Council of Zambia.  Janet  has research interests in Special / Inclusive Education Research Interests in; Disability, Education and Poverty; Inclusive school Practices; Disability and HIV / AIDS Education and other cross- cutting issues; Disability and Curriculum Issues; Special / Inclusive Schools and Family Partnerships; Integration of Disability Issues in Higher Education; Policy Issues on Special/Inclusive Education; Identification, Assessment and Rehabilitation of learners with disabilities; Guidance and Counseling related issues.

Children with Special Needs and those with Albinism

She is a very experienced and seasoned educator with a vast experience in education and management issues and capable of providing mentorship to upcoming scholars. Janet believes in having inclusive and user friendly education systems, with accessible learning environment that would cater for all despite of ones background in order to alleviate poverty levels.

Distributing gifts to children with Albinism

In the year 2009, Janet obtained her first degree at The University of Zambia in B.ED. Sp.Ed  She   has been through several education training institution from  1997-2004 in Primary School  methods certificate  at Malcom Moffat Teacher’s Training College,  Secondary Teacher’ Diploma in  at  Nkrumah Teacher’s College and majored in  English Education and Physical Education. Janet has severed various portfolios in the Ministry of General Education from 1999- to date.   She has been a class teacher from ECE, primary grades and secondary grades. She has taught Hearing Impaired learners English as a subject and is conversant in Sign Language.

According to Janet, children are her strength. She ensures to celebrate children, especially those with special needs.

Janet   has handled and taught learners with various disabilities.  As a teacher, Janet taught in various primary schools and secondary schools.  Her first appointment was from 1999 – 2000 at Chindwin ‘A’ Primary School. Due to her hand works in 2000- 2003 she was seconded to teach in at Kabwe Trust School which used the European curriculum intensively. After upgrading she was transferred to Stephen Lwisha Girls Secondary School. Upon completion of her degree in Special Education She was transferred to work at Broadway Basic School in the Special Unit Section to teach Children with Special Education Needs.

Mother Teresa was correct when she reflected in the following words:

Madame Janet Mwansa Kakusa Wonani who is currently a Senior Lecturer in Special/Inclusive Education and Health/ Nutrition in ECED is indeed a woman of service who goes the extra mile daily  for  the marginalised . Janet reaches and takes care of the most marginalised and discriminated Persons with Albinism (PWA), Persons Living with Disabilities (PLWD), Orphans and Vulnerable Children (OVC’s) and elderly parents country-wide and in Tanzania. She is the AfricanOrbit hero of the year.

Spread the love(Genesis 50:14 (NIV) …14 For God shall bring every END_OF_DOCUMENT_TOKEN_TO_BE_REPLACED

Previous Post We Refuse to Accept Second Class Citizenship In the Country of Our Birth By Elder Siahyonkron J. K. Nyanseor, Sr. Jonesboro, Georgia
Next Post Femi Falana narrates the build-up to Sowore and Bakare’s rearrest by the DSS