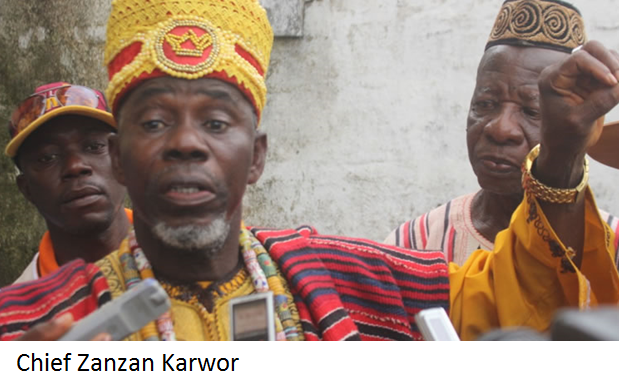 When I read about the December 9, 2016 Proposal, that: "The House of Representatives has endorsed a letter proposing the election of town, clan, and paramount chiefs to ensure that the Constitution of Liberia is fully adhered to”, I was baffled and disappointed. It seems that those in the respective houses need to study the historical realities of Liberia, before the introduction of this unfortunate concept. Perhaps, there is a need to briefly educate those who are oblivious to the introduction of this concept in Africa, especially in Liberia. This concept was intended to undermine the leadership and political power of African traditional leaders by the European colonizers.

Traditional leaders under the banner, Council of Chiefs and Elders of Liberia

Paramount Chief is the English language designation for the highest-level political leader in a regional or local polity or country administered politically with a chief-based system. This term is used occasionally in anthropological and archaeological theory to refer to the rulers of multiple chiefdoms or the rulers of exceptionally powerful chiefdoms that have subordinated others. Paramount chiefs were identified by English-speakers as existing in Native American confederacies and regional chiefdoms, such as the Powhatan Confederacy and Piscataway Native Americans encountered by English colonists in the Chesapeake Bay area of North America. (Wikipedia).

Paramount Chief formal title was created by British administrators during the 19th and 20th-century Colonial era and used in India, Africa and Asian colonies. The British used it as a substitute for the word "king" to maintain that only the British monarch held that title. Since the title "chief" was already used in terms of district and town administrators, the addition of "paramount" was made to distinguish between the ruling monarch in England and those found in Africa. So, the African kings were to be referred to as ‘Paramount Chief’, but not King (Wikipedia).

Dr. Al-Yasha Williams, an Assistant Professor in his article, drew illustrations from Cameroon’s history especially its colonization by Germany, the following discussion of “kings and queens explores some of the conventions “traditional”, “pre-colonial” and/or “hereditary” African leadership and authority systems and its influence on the construction of a Diaspora “imagination”. He used the term “traditional” not to invoke a philosophical binary with “modern” or “modernism” but to denote indigenous forms of African cultural group identity formation and nation-state governance that predate substantial European colonial influence, which is to say, pre- late. This is then contrasted with the “modern” African nation-state which retains vestiges of European colonialism in land redistribution, amalgamated cultural/linguistic groupings and, as he argued, political structure. For example, on this account, he alluded that the cultural groupings and leadership of the “traditional” nation-state of Yoruba had a different arrangement than the “modern” nation-state of Nigeria, which fuses Yoruba with other “traditional” nation-states by retaining British land delineations and governmental procedures (African Studies Quarterly, http://www.africa.ufl.edu/asq/v7/v7i1a4.htm).

The concept of ‘Paramount Chief’ was introduced in Liberia, by the Founding fathers, (Americo-Liberians) who too used it to their political benefits, with complete disregard to the culture and political practices of their Africans who they met in West Africa. They introduced an electoral system in which paramount chiefs were elected, in complete contradiction to the practices of our forefathers. Our kings were never elected; the council of elders would select most often a warrior, or the first male child that was based on bloodline.

This unfortunate practice continues to exist today in Liberia. During the Tubman administration, with the introduction of the Unification Policy, this practice was effectively put into

practice. District commissioners were appointed to undermine the Traditional Royalties in Liberia. In most cases, District Commissioners that were appointed had the power to dismiss an elected paramount chief from his position. This unfortunate contradiction continues to exist in Liberia today.  The profound contradiction continues in Liberia’s governance domain, the Superintendent within each county, is appointed by the president, instead of their election by citizens   that he/she governed.

To read that “The House of Representatives has endorsed a letter proposing the election of town, clan, and paramount chiefs to ensure that the Constitution of Liberia is fully adhered to”, this endorsement is Anti-African and undermines the integrity of our traditional values. Our forefather must be turning in their graves for this level of ignorance, especially when the origin of the constitution in question was used to oppress the indigenous population of Liberia for over 133 years. To continue to perpetuate this mindset at this point in the History of Liberia is most unfortunate.

One of Liberian writers, Mr. Teah Wulah in his book (The Forgotten Liberian: History of Indigenous Tribes), informed:  “at the head of each clan was the clan chief, except in cases of a very large clan where a “very big chief” or king position was created for the purpose of defense. This was the practice of the natives of the hinterland for many centuries before the arrival of the Americo-Liberians. After the chiefs were brought under control by the government, certain clan chiefs, probably, because of their outstanding ability perceived by the government, were designated “paramount chiefs” and given a nominal authority and responsibility over other clan chiefs of the area, never over the whole tribe.”  Also, he concluded,

“this new organization of the natives’ political power was seen as a control by the government. Heretofore, every political entity was hereditary. Now the government had created a “para” or outstanding position over which they, the natives, had no control. It is for this reason that one can find no record of the duties of a paramount chief in the archives of the Liberian hinterland prior to the coming of the settlers.”

George Lutz and Wolf Linder wrote in their article: “Traditional structures remain very important in organizing the life of the people at the local level despite modern state structures. Traditional authorities, for example, regulate village life, control access to land, and settle disputes. The existence of traditional authorities means that both the decentralization and the strengthening of local governance is not taking place in a vacuum. Recent experience has shown that successful decentralization must take existing traditional structures into account. While the standard view has been that they are a historic burden on the road to modernity, it is now widely recognized that for many people, traditional structures are often more legitimate than the modern state.” Subsequently, “In many cases, people accept traditional structures because of central government failures in building functioning structures at the local level. To rely on traditional norms and rules is not only comprehensible but also quite rational, especially if there is no better alternative. If the state is unable to improve people’s lives substantially on an everyday basis, it is not surprising that people continue to live according to their traditional structures and rules without taking much notice of the central government.”(https://pdfs.semanticscholar.org/c353/6f685bd86656589cacaec83d301eeeca9c17.pdf)

As Liberians, there is need to return to our African roots and abolish the practice of electing town chiefs and paramount chiefs; such elections are not in the best interest of tribal or ethnic cohesiveness. The infusion appointment of a district commissioner to oversee the affairs of traditional leaders should be abolished. And those endeavoring to reintroduce the ‘hut tax’ into Liberian body politics need to re-examine their heads. The late President Tolbert was correct when he with the consent of the Liberian Legislature abolished the evil imposition of the hut tax.

Indeed, traditional leaderships in many parts of Africa are rooted in the communion of community elders. Such leadership comes from the blood lines of their forefathers, not electedand this is also consistent with the practice in the western world, when they continue to honor Queen Elizabeth of England and other contemporary western monarchies. We as Liberians must draw from the strengths and spirits of the Kings of our forefathers…the various kings of  the Belle, Gbandi, Loma, Mende, Mano (Ma), Gio (Dahn), Kpelle, Gola, Kissi, Mandingo, Vai, Bassa, Krahn and Sapo, Grebo Klao (Kru) etc.; and also,  may the Spirits of the various kings of Mali, Ghana and Songhai Empires continue to guide us  as we endeavor to re-orientate our minds in the appreciation of the values  and customs of Africa!

Mr. Edmund Zar-Zar Bargblor is an

Educator and an Author. He worked as an Educator in Providence Schools Department, RI & Washington, D.C, School System, United States; Bong Education System, as Head of Department of Mathematics in Liberia. He is a graduate of Cuttington University, Liberia, Howard University, Washington, D.C, and Israel Institute of Technology, Haifa, Israel. He is a former Deputy Managing Director of the National Port Authority of Liberia, NPA. He can be contacted at: [email protected]

Previous Post Weah Continuing the Practice of Unlimited Use of Presidential Power By Elder Siahyonkron J. K. Nyanseor, Sr.
Next Post Dual Citizenship in Liberia: Is It About Jobs, Or Sustaining the Economic Viability of the Nation? By Edmund Zar-Zar Bargblor