The Plight of Liberia’s Children Classified as Zogos: Are We Really a Nation of Conscience? By Edmund Zar-Zar Bargblor 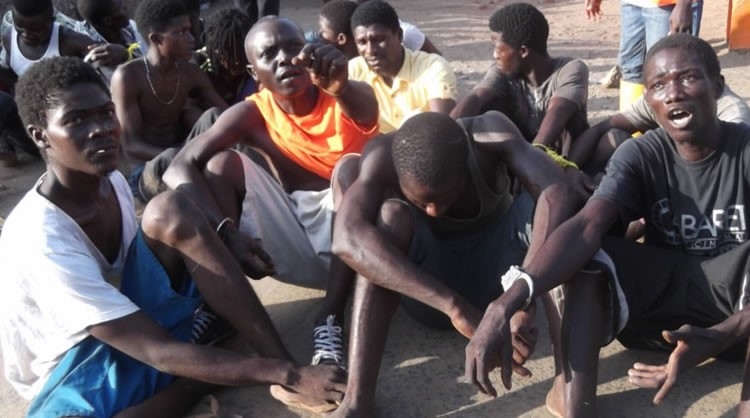 It has been reported in Liberia, especially in Monrovia,   youth in communities such as ghettos and shanty structures, usually come out during night to hijack and sometimes burglarized   homes.  Most Monrovians called these youth, ‘Zogos, because they are so many like the caterpillars.’ (https://frontpageafricaonline.com/news/2016news/new-breed-of-criminals-liberia-s-pickpockets-known-as-zogos/)

Since the inception of the Liberian Civil war in December of 1989, there has been the disruption of food supplies, the destruction of crops and agricultural infrastructures; this includes the disintegration of families and communities, the displacement of populations and the destruction of educational and health services as well as water and sanitation systems. These destructions can in no way be compared to the seriousness of the damage and heavy toll on the

minds of Liberian children who lived through and witnessed various forms of atrocities during the war. The wounds inflicted by the civil war on children – physical injury, gender–based violence, psychosocial distress, are affronts that would have a lasting impact on the present and future human resource development of Liberia. Indeed, armed conflict affects all aspects of child development, such as physical, mental and emotional stability.

The war in Liberia has exacted terrible tolls on children. Children and their families have suffered as refugees, displaced people within their own national borders, or as civilians remaining at home in or outside of war zones. The wars have affected children's physical health, mental health, day–to–day life, and hopes for the future. The wars have also extracted a heavy toll on the health care system through the loss of facilities and infrastructure; the loss of supplies and equipment, physicians and nurses. The economic hardships of war have resulted in fewer resources for health care. Prior to the wars, there were several medical doctors within the country, but the number of doctors decreased as the war–years progressed.

Graca Michael, Expert of the Secretary General of the United Nations, stated in her report on child soldiers that, when children experienced traumatic or other events in times of war, they may suffer from increased anxiety about being

separated from their families, or they may have nightmares or trouble sleeping. She emphasized that children may cease playing and laughing, lose their appetites and withdraw from contact. And those younger children may have difficulty concentrating in school. Older children and adolescents may become anxious or depressed, feel hopeless about the future or develop aggressive behavior.

Those in the professions of education and behavioral sciences, have realized that infants and toddlers who witnessed violence either in their homes or in their community show excessive irritability, immature behavior, sleep disturbances, emotional distress, fears of being alone and regression in toileting and language skills. Exposure to trauma, especially violence in the immediate environment, interferes with a child’s normal development of trust and later exploratory behaviors, which lead to the development of autonomy. Despite the limited research in this area, however, much can still be gleaned from existing studies about the effects of children’s exposure to violence.

Dr. Joy D. Osofksy, Professor of Public Health, Psychiatry & Pediatrics at Louisiana State University Health Science Center, outlined in her research on family violence states that violence causes adverse effects on children’s physical, cognitive, emotional and social development. Other studies on the effects of exposure to violence on children also indicate an increase in negative behaviors. Professor Osofksy made a parallel between children growing up in inner cities in the United States and those living in war zones in places like Liberia and other countries whose populations have suffered from civil wars. In fact, findings from several studies show posttraumatic stress disorder symptoms of children living in urban war zones to be like the symptoms of children living in actual war zones.

Child soldiers were recruited in many ways. Some were conscripted especially under the Charles Taylor & Samuel Doe’s governments; others were press–ganged or kidnapped, and still others forced to join armed groups to defend their families. In many instances, recruits were arbitrarily seized from the streets, or even from schools and orphanages. During this period, armed militia, police or army cadres roam the streets, picking up anyone they encountered. For example, hunger and poverty drove some parents to offer their children for service; and encourage their daughters to become wives of rebel commanders and fighters. Throughout the war years, children became soldiers simply to survive. The various rebel groups provided a refuge, serving as a kind of surrogate family. Children sometimes join one of the rebel groups to guarantee simple regular meals.

The recommendations below were generated from the Report by Graca Machel, Expert of the Secretary–General of the United Nations. These recommendations were put in place at the international level to help solve some the problems these child soldiers were confronted with daily.

A. Programmes at the national and local levels, should be designed to place special emphasis on providing appropriate educational and recreational activities for adolescents affected by armed conflicts.

B. Special efforts should be made for demobilized adolescent soldiers, such as projects which offer alternative livelihoods and promote their reintegration into their communities. Human resources development, including youth education, employment and training schemes, should be promoted.

C. Intergovernmental bodies, United Nations agencies and other organizations should support Governments in strengthening national legislative frameworks challenging any aspect of discrimination against women, and girls.

The Weah Administration must endeavor to develop an education agenda that will put in place a comprehensive program oriented to providing adolescents a sense of meaning and purpose by involving them in developing and implementing programs for younger children in the community. Adolescents have special needs and special strengths, and they should be active participants in creating solutions, not just as victims or problems but as survivors.

In order to ensure that their needs are met, young people should be involved in community–based relief, recovery and reconstruction programs. This can be achieved through, for example, vocational and a skill training that not only help

to augment youth’s incomes, but also increases their sense of identity and self–worth in ways that enhance their psychosocial well–being. Institutions like the Booker T. Washington Institute and other vocational intuitions of learning should be economically empowered in order to provide the needed vocational training and skills to former school age combatants. All vocational schools, be it governmental or private, should operate under the guidelines of the Ministry of Education. A prescribed post war vocational curriculum needs to be put in place that would accommodate the effective molding of the minds of former child soldiers.

I honestly agreed with what a student at the University of Liberia wrote, “I am urging the Drug Enforcement Agency (DEA) to be very proactive than ever before in the eradication of cocaine, opium and other antidepressant drugs from the Liberia market and hideouts to rescue young people who are usually dependent on these harmful substances” (Francis G. Boayue, The Perspective.org, 16 February 2019).

Liberian youth of war, begging for food and money on the streets of Monrovia

The task of reintegration of Liberian children of war is the responsibility of all Liberians, especially the religious community, the civic society and the business community. The Liberian Government cannot do it alone. Proper reintegration program can also help to normalize life and to develop an identity separate from that of the soldier. A difficulty to be faced is the likelihood that former combatants may have fallen far behind in their schooling, and may be placed in classes with much younger children. Specific measures may be required, such as establishing special classes for former child soldiers, who can then be reintegrated into regular schools.

The process of reintegration in Liberia must help children establish new foundations in life. Re–establishing contact with the family and the community is important for former child soldiers who have grown up away from their families and who have been deprived of many of the normal opportunities for physical, emotional and intellectual development. Providing educational and vocational opportunities to former child combatants may prevent them from joining gangs, or roaming the streets of Monrovia at night conducting mayhem and other forms of violent acts on peaceful residents.

The effective reintegration of Liberian youth classified as Zogos is paramount to the success and durability of   Liberia as a functional civilized society. The greatest peril to stability in Liberia is illiteracy of Liberian youth. The 14 years of war have taught us the lesson of illiteracy. The question that one needs to ask is: what can we do as Liberians to create a stable frame of mind for each of Liberia’s children of war or do we continue to ignore them and pay the price and consequences of their actions in society?

Mr. Edmund Zar-Zar Bargblor is a graduate of Cuttington University, Liberia; Howard University, Washington, D.C, and Israel Institute of Technology, Haifa, Israel. He is a former Deputy Managing Director of the National Port Authority of Liberia, NPA. He can be contacted at: [email protected]

By now, most people have read the story of the END_OF_DOCUMENT_TOKEN_TO_BE_REPLACED

It is a glaring fact that Northerners occupy over 80 END_OF_DOCUMENT_TOKEN_TO_BE_REPLACED

Presidential Special Scholarship : “In 2014, I and several other END_OF_DOCUMENT_TOKEN_TO_BE_REPLACED