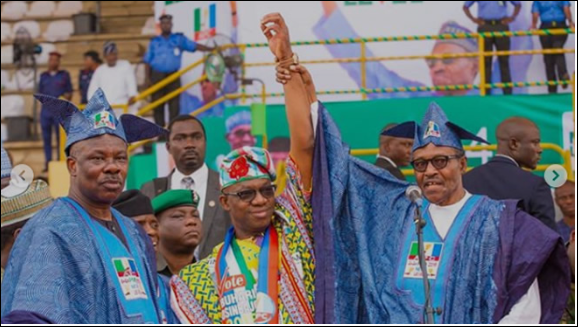 One could not help getting mesmerized by the unfolding developments that we watched in Abeokuta on Monday February 11, 2019; Gov. Amosun, like a maniac personally tearing down the posters of the party’s official candidate; ordering party operatives [thugs] to dismantle anything that belonged to the official APC gubernatorial candidate; ad nauseam. It was a show of shame, disloyalty, betrayal and any other name that could be appended to a rather distasteful behavior by the highest officer of Ogun State. It was, TREASON and against the President of the Federal Republic of Nigeria!

When it was all over, Nigeria’s President, his Vice, national and state officials of the ruling party were, on the instructions of Gov. Amosun, subjected to objects being thrown at them and, thanks to cooler and the well-trained minds and able security personnel, order prevailed. In such circumstances in other climes, the security personnel could reacted by unleashing firearms in defense and protection of Mr. President and his team. What a calamity that would have been! How many deaths shall we be mourning today?

Perhaps the full extent of the damage caused by the deranged comedian-in-charge, Governor Ibikunle Amosun for this undesired and undeserved  comedic episode has now fully dawned on him. Ogun State is in tears and her usually well mannered people are asking what happened to human dignity, respect and cordiality that are always accorded visitors, especially very important and significant visitors.

By effecting this dastardly event, Gov. Amosun has exposed his characteristic banality; a decisively murderous, machinating, lying, self-conceited focus and, finally, the delivering of the Brutusque stab in plain view of the whole world while playing hedonist.

Amosun is Governor of one of the most politically savvy states in Nigeria and he must be a misguided tactician for the shenanigans he has embarked upon and which materialized before our eyes on Monday in Abeokuta. He is running for a national office on the platform of the ruling party while, at the same time, playing sole proprietor for a neophyte party he raised out of his frustration with his party because they will not allow him to foist a candidate on the state’s party members; a case of eating one’s cake while trying to have it in hand. He has just displayed his folly by the events he unleashed.

The fact that Amosun was on the stage with the President at this event speaks volumes of the fact that President Buhari, probably, was in the know of Amosun’s abracadabra and the consequent brouhaha that sent him and his accompanying dignitaries fleeing for dear lives with their tails in-between their legs.

Perhaps, one should ask, what was Amosun expecting Mr. President to do at an APC rally? Raise Amosun’s candidate’s [a member of the APM party] hand and urge the crowd to vote for that candidate instead of Dapo Abiodun, the bona fide candidate of the APC? Gov. Amosun must, surely, be insane!

Here is the Ogun State scenario according to Gov. Amosun. He has told all APC members in the gateway state who believe in him to move to the APM while he stays behind in APC to realize his own ambition. Also, he told them to drop their APC tickets, move to APM and pick the ‘Chinese’ version of their APC tickets. What political moron will do that; throw him/herself under the bus? Well, Mr. President was right on the money when he said: “vote for whoever you want as your governor. I am the presidential candidate for all.”

Love him or hate him, his playbook is worth taking a second look at. When it is all over, Amosun, Dapo Abiodun and President Buhari would be the likely winners of the elections. But Ogun State and Nigeria’s image are permanently fractured; thanks to the monumental indiscretion, personal greed and self-conceitedness of Ibikunle Amosun.

An earlier victim of Amosun’s political shenanigan, Chief Tolu Odebiyi deserves congratulations as the one who threw him under the bus would soon be his “classmate.” Please continue to respect and call him “His Excellency.” Do not, like him, burn any bridges. If you look at the whole arrangement, you will agree that it is by God’s design. Amosun has no control over your destiny. If he has, you will be the gubernatorial candidate now but will be jobless in two weeks! Congratulations, omo Oluewon, Tolu Odebiyi. You are the spotless winner. We need to celebrate your simplicity and candor imbibed from your late parents.

Finally, like Winston Churchill said “I always avoid prophesying, because it is a much better policy to prophesy after the event has already taken place.” Nigeria, and the good people of Ogun State will be the winners at the forthcoming elections not the jackals that unleash the venom of deceit and fraudulence on the people.

Spread the loveBuhari’ government through the ministry of finance took END_OF_DOCUMENT_TOKEN_TO_BE_REPLACED