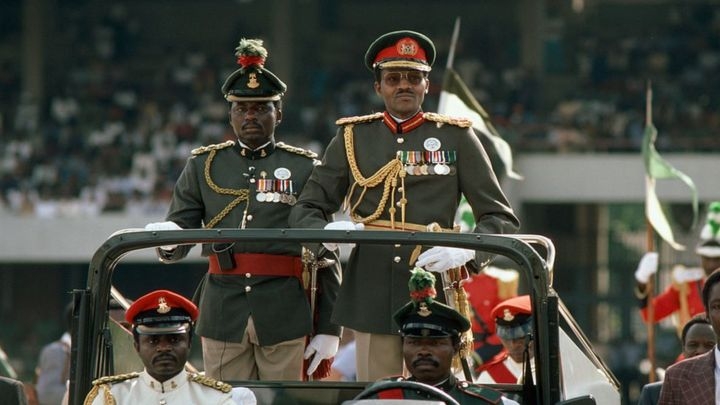 Buhari has completely wiped out our democracy. All freedoms have been curtailed and contained. Judiciary and legislature have become annexes of the executive. Buhari has castrated and rendered impotent the two arms that could effectively check his authoritarianism. Insecurity, violence, killings, unrest, and all other evil reminders of a tyrannical regime are back with Buhari. Only Major General Dictator Buhari and the profiteers of miseries are too blind to see the looming anarchy.

The PUNCH in its reaction to the illegal continued detention of Omoyele Sowore and Olawale Bakare, wrote a scathing editorial condemning the brutalities of Buhari. Titled “Buhari’s lawlessness: Our stand,” PUNCH came out boldly and disrobed Buhari’s civilian presidential dress and replaced with military fatigue to match his tyrannical one-man rule dictatorship.

The paper said, “As a symbolic demonstration of our protest against autocracy and military-style repression, (all our print newspapers, the PUNCH, Saturday PUNCH, Sunday PUNCH, PUNCH Sports Extra, and digital platforms, most especially Punching.com) will henceforth prefix Buhari’s name with his rank as a military dictator in the 80s, Major General, and refer to his administration as a regime, until they purge themselves of their insufferable contempt for the rule of law.”

PUNCH is the only newspaper standing with the people. The rest have gone into hiding.

Because Major General Dictator Muhammadu Buhari never fought any war, he lacks the leadership traits common with successful military generals. Tactical leadership is the core of military generals such as Alexander the Great, Genghis Khan, Hannibal, and Saladin.

What makes a leader? Certain fundamental leadership traits are indispensable to fighting generals with responsibility to lead soldiers and civilians as the case may be. General Mark A. Milley, the 39th Chief of Staff of United States Army, said the trait of a good military leader are: “agility, adaptability, flexibility, mental and physical resilience, competence, and most importantly character.” Buhari has no agility, can’t adapt, not flexible, lacks mental and physical resilience, lacks competence, and zero character.

Because Major General Dictator Buhari lacks the traits of a successful military general, it’s impossible for him to transfer or apply tactical leadership to governance as a civilian president. Leadership is about doing the right things big or small. It’s about treating people with dignity and respect, earning and building the trust of people, setting the highest moral and professional standards, and holding oneself and everyone in the organisation or government accountable, communicating openly, transparently, and continually. Buhari is tragically deficient in all areas.

Buhari has failed to provide institutional leadership for the country. He does not see himself as supervisory manager responsible for the smooth running of the country. He is the wrong leader for the tough times. Because Major General Dictator Buhari is not a tactician, he can never offer the required level of insight and wisdom into governance. He is a dramatic failure in intelligence, reasoning, persuasion, deliberation, and reflection.

Buhari’s ineptitude as president defies logic. All his life, he has proven to be a self-aggrandising opportunist, who wreaks havoc in any decision that he makes. At every giving opportunity, he never missed the opportunity making himself a laughing stock. He has acquired a reputation as a president who is wholly indifferent in the choice between truth and falsehood.

Sowore, Bakare, and scores of others who were detained illegally by Buhari are victims of his unrestrained tyrannical rage. In a country where lions are led by donkeys, Buhari remains undisturbed, untouched, and unchallenged. For how long will Nigerians tolerate and him?

Spread the loveBy now, most people have read the story END_OF_DOCUMENT_TOKEN_TO_BE_REPLACED

Spread the love“We, Yoruba, lead in the choice of the END_OF_DOCUMENT_TOKEN_TO_BE_REPLACED