The Evil Hands of Corruptions: Those Who Perpetuate Corruptions in Society, are Also Victimized by their Actions By Edmund Zar-Zar Bargblor 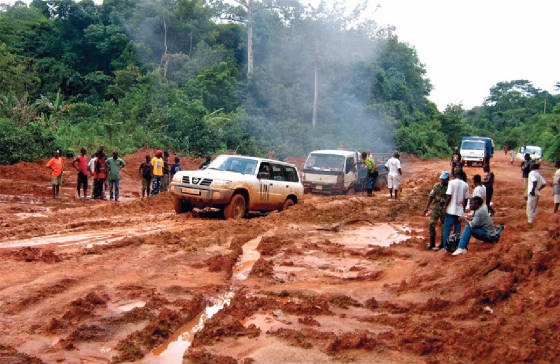 The Bible has much to say about the sin of stealing, God even made it one of His Ten   Commandments. Even Timothy (6:10), cautioned the believers of Jesus Christ that,  for the lover of money is the root of all kinds of evils. It is this evil attribute that it is called or classified as corruption.

Mr. Gaurav Gogoi , a member of the Indian Parliament, observed that ‘Corruption’ as an institution, “impacts all aspects of a nation, that is, national growth, peace and development adversely. He emphasized that National growth is a function of economic growth, foreign trade, domestic consumption, employment, public infrastructure, and social indicators. Nations plagued with corruption are an unattractive proposition for investors, which also effects employment opportunities and foreign trade” (https://www.unodc.org/southasia/).

An African Union’s report in 2002, pointed out that corruptions cost the African continent within the domain of $150 billion annually, compared to developed countries given $22.5 billion in aid to sub–Sharan. Africa needs to curtail corruptions instead of relying on Foreign Aid

Some Root Causes of   Corruption in Liberia

Most well–intentioned corruption–busting remedies in Africa fail because the root causes are often poorly understood. Post–independence African countries inherited deeply corrupt institutions, laws and values from colonial  years of domination Instead of changing these for the better, African ruling parties and leaders entrenched these deeply compromised governance systems (William Cumede: The root causes of corruption in African countries, 5/23/2012).

While in Liberia, the Liberian colonial elite, the founding fathers of Liberia, centralized political, economic, civic power, reserving top jobs in the public and private sector, and education only to fellow colonials. In the colony, the institutions that should traditionally serve as watchdogs against corruption – the judiciary, police, security services and laws – selectively served only the Liberian elites.

This unfortunate mentality is generally classified as a ‘Congau Mentality’, also played an active role in the underdevelopment of Liberia. Under past Liberian governments, little economic development was carried out because all the money was used to pay the government salaries of friends and family members. According to this mentality, the purpose of government was to provide jobs for people. Instead of wasting valuable funds on an overgrown government, all resources should have been directed towards building a business infrastructure for a modern society and fostering economic development. In Liberia, honest individuals who worked in governments without stealing the limited resources of the country were perceived as failures, while those who stole government money and resources to build two to three houses just in one year on salaries below US$20,000 annually, are viewed as successful individuals.

This mentality fosters stealing in government. What is taking place presently in Liberia, such as   demanding   money from foreign investments is not new in Liberia. The CDC’s leadership was elected to change these unfortunate corrupt practices. But this situation apparently, is in the influence of the status quo. It is hoped, the Weah’s administration will endeavor to address and curtail the influence of corrupt practices, especially in demanding bribes from foreign investors.

Reports continue to flow in the diaspora that Logging companies are using several tricks to undermine community forestry in Liberia, including:

·       Seizing control over community forests before permits have even been awarded to communities.

Drawing communities into secret pacts by working with local elites who haven’t been formally elected by the people to represent their interests.

·       Exploiting legal loopholes to take advantage of weaker areas of regulation and maximize their profits.

According to the Global Witness, the above  is not the first time that the Liberian forest has been hijacked by large rapacious logging companies – the Private Use Permits scandal in 2012 saw the logging industry exploiting licenses designed for small operators, with millions of hectares of land handed over to illegal loggers, (https://www.globalwitness.org/en/campaigns/forests/power–people/).

Sadly, in this same news organ reports, highlighted   that   there are foreign companies, in cohort with local officials and pricing control over Liberia’s rich such as diverse forest ecosystems, away from communities, and for themselves. Especially, where most of the interior areas have no road networks, no clinics, no schools, no bridges to connect them with motor vehicles, etc., but millions upon millions continue to generate from natural resources from   these areas, the question is ‘why’?

News recently, have also been reported that a ‘leaked audio recordings in possession of FrontPageAfrica revealed ‘how the National Housing Authority (NHA), apparently in cohort with some big shots in government, extorted thousands of United States dollars from a Burkinabe investor seeking to build 5,000 housing units in Liberia for low income earners’ (11/23/2018).

This mentality has created the impression that all solutions are political solutions, where improving one’s self was through the embezzlement of public funds, the extortion of funds from the private sector, or padding the government payrolls with family members. What is taking place in Liberia currently, is the legacy of the corrupt founding leaders who setup in Liberia in 1847….

Dr. Blyden reflected in some of his speeches reflected: “What are the moral causes of the present evils in Liberia? as a people, we have been in too much haste to be rich. Relinquishing the pursuit of those attributes that would fit us for the faithful discharge of our peculiar duties as men, as Liberians, as an infant nation, we have used every possible measure to enhance our pecuniary importance; and in the precipitate efforts at wealth, we have not been careful as to what means we have employed. The desire to be rich, or to appear to be rich, pervades all classes. The love of money…has grown upon us to such a degree that all other avenues of distinction seem but trifling in comparison of those which lead to the acquisition of money. To be rich seems with many ‘the chief end of man.’ Hence, no talents, no endowment of the mind, no skill or knowledge, no amount of education, is appreciated only so far as it will pay…. This fact has operated greatly in retarding the literary progress of our youth” … (July 27, 1857, from Dr. Blyden’s Speech, 161 years ago in Monrovia).

I hope a clergy will head the Anti–Corruption Commission. I am confident, the above composition will enhance the already objectives as formulated by the current Commission, namely:

·        “To lead the implementation of the Anti–Corruption strategy of Liberia”

·        “To prosecute corrupt conduct in the public sector”

·        “To actively prevent corruption in public sector institutions”, and

·        “To educate the citizens and public sector about corruption and its effects.”

Effective law enforcement is essential to ensure the corrupt are punished and break the cycle of impunity, or freedom from punishment or loss.

Reforms focusing on improving financial management and strengthening the role of auditing agencies have in many countries achieved greater impact than public sector reforms on curbing corruption.

One such reform is the disclosure of budget information, which prevents waste and misappropriation of resources.

Strengthening citizens demand for anti–corruption and empowering them to hold government accountable is a sustainable approach that helps to build mutual trust between citizens and government. For example, community monitoring initiatives have in some cases contributed to the detection of corruption, reduced leakages of funds, and improved the quantity and quality of public services.

Without access to the international financial system, corrupt public officials throughout the world would not be able to launder and hide the proceeds of looted state assets. Major financial centers urgently need to put in place ways to stop their banks and cooperating offshore financial centers from absorbing illicit flows of money.

The European Union recently approved the 4th Anti–Money Laundering Directive, which requires EU member–states to create registers of the beneficial owners of companies established within their borders (https://www.transparency.org/news/feature/how_to_stop_corruption_5_key_ingredients)

Mrs. Meenakshi Lekhi  once said: “Corruption works quite contrary to the social economic emancipation of a society. All this leads to strife and lack of authority, lack of faith in the authority. When there is no faith in the authority, the justice system, legal system, administrative system, all systems are impacted, and all this results in stunted growth or lack of opportunity for growth, production, inefficiency, bad governance, and hence peace is affected completely” (https://www.unodc.org/southasia/).

Indeed, corrupt practices violate the dignity of all Liberian citizens, be it Americo–Liberians, Krahns, Klaos or Krus, Mano or Dahns, etc.  Corruption as we have witnessed from the impact

There is no silver bullet for fighting   and overcoming corruption. Some African nations have made significant progress in curbing corruption. Liberia as a nation has the capacity also   to defeat the evil hands of corruption, for the sake of our children, grandchildren and future generations to come….

In most situations, if someone for example, offers an employee a bribe that is twice their salary for a million–dollar deal, the employee is likely to accept the bribe. Those    who have satisfactory wages, will be less tempted to take the bribe. Corruption is a deadly disease, as evident in Liberia. It kills the economy of the nation, and the unfairness leads to many suffering, including those who perpetuate corruption as well. There are no good roads, poor academic facilities, poor health institutions, especially in the interior regions. Bad roads continue to hamper commercial   opportunities, motor vehicles find it difficult to travel within the southeastern region during the raining season, especially in Grand Gedeh County.  As the result, there are   no adequate delivery opportunity of goods and services to our people   located in those areas. Yes indeed, we are all victims by those who perpetuate corruptions in society.

Suzy Kassem was correct when she said:

“Pick a leader who will keep jobs in your country by offering companies incentives to hire only within their borders, not one who allows corporations to outsource jobs for cheaper labor when there is a national employment crisis. Choose a leader who will invest in building bridges, books, not weapons. Morality, not corruption. Intellectualism and wisdom, not ignorance. Stability, not fear and terror. Peace, not chaos. Love, not hate. Convergence, not segregation. Tolerance, not discrimination. Fairness, not hypocrisy. Substance, not superficiality. Character, not immaturity. Transparency, not secrecy. Justice, not lawlessness. Environmental improvement and preservation, not destruction. Truth, not lies. Fighting corruption is not just good governance. It’s self–defense, it’s patriotism.”

Mr. Edmund Zar–Zar Bargblor is an Educator. He is a graduate of Cuttington University, Liberia; Howard University, Washington, D.C, and Israel Institute of Technology, Haifa, Israel. He is aformer Deputy Managing Director of the National Port Authority of Liberia, NPA.; Former Chairman of the Department of Mathematics, Bong Town High School, Bong Mines , Liberia; Instructor of Mathematics,  Providence School Department, Rhode Island, USA. He can be contacted at: [email protected].com

Spread the loveBuhari’ government through the ministry of finance took END_OF_DOCUMENT_TOKEN_TO_BE_REPLACED