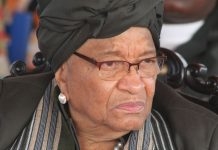 On December 26, 2017, the change the Liberian people desired was given to them through the decisive victory of the Congress for Democratic Change (CDC), headed by Senator George Manneh Weah. Now, what is required is the smooth and peaceful transfer of power in ALL democracies, especially, the Liberian Democracy. Why should this one be any different? Why turn a simple peaceful transfer of power into something so complex which involves the outgoing president and the incoming president to form a committee in which two of them serve as co-chairs? When I last checked, this process, which requires an Executive Order 91 to transfer power is first of its kind in 70 years. Why should it be different? Peaceful transfer of power is the cornerstone of a democracy. President Sirleaf’s Executive Order 91, is total and absolute violation of the Constitution and Statutory laws of Liberia.

Here is what Chapter 6: Article 50 of our Constitution states:

The Executive Power of the Republic shall be vested in the President who shall be Head of State, Head of Government and Commander-in-Chief of the Armed Forces of Liberia. The president shall be elected by universal adult suffrage of registered voters in the Republic and shall hold office for a term of six years commencing at noon on the third working Monday in January of the year immediately following the elections. No person shall serve as President for more than two terms. To continue to unlawfully arrest and hold onto power, President Sirleaf (a lime duck President), without the slightest support of the Constitution of Liberia administratively proposed and singlehandedly passed into law, Executive Order 91, lending and assigning to herself the power to establish a transitional team whose term of reference runs contrary to Article Chapter 6, Article 50 of the Constitution.

It is the right of an individual to establish his/her own destiny. A person’s destiny does not have to be planned by others! The same is true in a political transfer of power. All that is required is for the outgoing administration to assist with the smooth and peaceful transfer of power as allowed by the Constitution; nothing more, and nothing less. So, as of January 15, 2018, the CDC will and shall become the governing party, and it does not have to drag along activities of the past government. Since lime duck president – Sirleaf and her Government has already violated Article 50 of the Constitution of Liberia, the CDC-led government of Liberia, is under no legal obligation to give credence to anything or actions taken by her outgoing Administration after 15 January 2018 since by default and constitutionally, Senator has already assumed power in Liberia, Monday, January 15, 2018. Precisely Monday, January 15, 2018, Senator George Manneh Weah becomes the President of Liberia.

Liberia’s presidential transition is the transfer of the executive branch power from the incumbent President of Liberia to the president-elect; during the period of time between Election Day of Tuesday, December 26, and inauguration day on January 15 all arrangements would have been concluded. Legally, this is the 3rd Monday immediately following the holding of the 26 December, 2017 Runoff Election. After Monday, January 15, 2018, President Sirleaf becomes former president. By law the inauguration of Liberia, must be held Monday, January 15, 2018. The Constitution of Liberia gives no special room for January 22, 2018. THE CONSTITUTION MUST BE FOLLOWED! We are not stupid!

Interpretation of Custom and Tradition

Equally, a number of changes or practices in the U.S. government have come about as the result of custom, tradition or precedence. For example, the US Constitution did not provide for regular meetings of the leaders in the Executive Branch of the government. However, President George Washington brought these leaders together regularly to serve as his advisors, which is known today as his Cabinet. Since that time, regular meetings between the President and his Cabinet have become an acceptable part of the tradition of the US government. Up to the present, there is no written law to that effect. There are other important traditions that have since developed. These traditions are followed regularly. Yet they have seldom been written down or made into laws. For this reason, they are sometimes called unwritten constitutional laws.

The Joint Transition Team is a Fiasco

Tradition dictates that it is illegal for a lame-duck government to renew or sign new contracts, which will obligate the incoming administration to inherit and enforce. Members of the Legislature and government officials who engage in such practice will be in violation of the rules that govern the transition of one administration to another; and those who do so will have to answer to the judicial system. Also, this applies to local and international businesses.

Moreover, the government cannot continue to handover the monopoly of our economy, and atrocious tax incentives and holidays to foreigners. It must stop! Liberians cannot develop their country with such an arrangement which favors foreigners.

For example, Part V Section 46 and Section 45.1 of the 1975 PPCC Law, from which the Liberianization Policy derived, should be enforced by the CDC government. It was seriously violated with impunity by the outgoing administration.

In these scheduled transitional Committee meetings, EJS’s lame-duck sessions should be discussing how funds will be made available for the incoming administration to operate, to reduce the National debt and not to increase it.

Liberia cannot remain a sweet land of bribery, where others’ interests take precedent over the citizens. The irony is; Liberians have become foreigners in their own country – all due to EJS’s creation. The questions are: How long will our people serve as second-class citizens in their own country? Now that EJS is on her way out ‘for good’, can we work together; reclaim the control over our resources and wealth in order to free ourselves from the economic bondage of the outgoing government? The answer is, yes, we can and we should!

Wonders shall never end! This was long in the making – from ‘Simple Majority’ to the Referendum that led to the amendment to the Constitution that modified the ‘10 Years Residency’ requirement and the new interpretation of the Code of Conduct (CoC) for government officials.

What the outgoing Administration should be doing is to give the President-elect operational and logistical support in the month before Inauguration. They should have assisted in things such as office space, human resources and Communications; including IT support, concessional and other outreach work.

In most democratic societies, the office of the chosen leader is supposed to serve the interest of the people, and not only the president, his/her family members, relatives, friends, those within their inner circle, and more especially, their international connections at the expense of the people they are supposed to represent.

The late African patriot, Julius Nyerere reminds us that:

“Poverty is an enemy of good governance, for persistent poverty is a destabiliser, especially if such poverty is shared in a grossly unequal manner, or is widely regarded as being unfairly distributed as the few who are

relatively rich indulge in conspicuous consumption… Known or suspected corruption among the political leaders often makes the problem worse – and corruption throughout the society more difficult to overcome. Good wages or salaries will not stop bad people from being corrupt but miserable wages and salaries are not conducive to rectitude. Political instability, real or imagined, can be a source and is often used as an excuse, for bad governance.

Nyerere’s statement describes what is taking place in Liberia. If we continue to ignore the facts, Liberia will become a country run by ruling elites and a network of associates that enrich themselves using state power recklessly. Their greatest defense is to counter truth with lies and to attack the massager bearing the truth,

In order for the CDC Government to make drinking water that is essential for life as a priority; road network and electricity that facilitate development and commerce; reduce government officials’ high salaries and wasteful spending, there has to be a complete point of departure from the policies of EJS’s government. The money saved could be used to fund some of the projects mentioned.

Truth needs no law to substantiate it to be Truth. It is self-evident that Truth is Truth from the time of Creation. However, it is only those throughout history make laws to enforce their opposition to it. This proclamation is a good example! It has no place during a transitional period of a government. This period should be for the inauguration of the president-elect and nothing else.


The meeting of the presidential team for at least three times before the January 22, 2018 inauguration serves no other purpose than to reward Ellen’s faithful servants. What tasks these so-called subsidiary groups will be meeting to do during a transition period? It doesn’t look right! The intent of such planning meetings is to render President-elect Weah’s government a complete failure, especially in a ludicrous or humiliating way.

According to reliable sources, the Presidential Proclamation which ordered the National Legislature of the Republic of Liberia for nine days working sessions is a fiasco. The real purpose is to reward EJS’s faithful servants, many of whom are listed below with several lucrative deals:

I noticed Vice President Joseph Nyumah Boakai did not make the list. Did he not make the list because he is not one of the President Sirleaf’s Most Faithful and Reliable Servant? The conclusion most rational people reached is VP Boakai is not. Perhaps, this is the reason the she fought and opposed his candidacy for him to not succeed her. This is the conclusion most Liberians, including me, reached.

On behave of the Liberian people; we congratulate Vice President Boakai for the decency and patriotism he demonstrated throughout the entire camp God Almighty will richly bless him and his family. The Liberian people will forever remain grateful to you for the outstanding services you rendered our beloved country.

To the Ellen Johnson Sirleaf Faithful Servant Award recipients, I say you are being closely watched. It is not going to be business as usual, and if you think you will continue this corrupt practice, you are juke this time around. It is illegal for the lame-duck administration to conduct business that will obligate the incoming administration to inherit is making FOOL of themselves; members of the Legislature, government officials, local and international businesses that engaged in such practice will be violating of the rules that govern the transition; and those who engage in such practice will have to answer to the law.   That’s how serious and committed we are to put LIBERIA FIRST!

Our eyes are opened; the time of the people has come!

About The Author: Elder Siahyonkron Nyanseor is former Vice Chair & Chair of the ULAA Council of Eminent Persons (UCEP), Inc. Also, he is a founding member & the 11th President of the organization. He is a poet, Griot/Historian, journalist, a cultural and political activist. He is an ordained Minister of the Gospel; Chairman of the Liberian Democratic Future (LDF), publisher of theperspective.org online newsmagazine and Senior Advisor to the Voice of Liberia newsmagazine. In 2012, he Co-authored Djogbachiachuwa: The Liberian Literature Anthology; his book of poems: TIPOSAH: Message from the Palava Hut will soon be on the market. Nyanseor can be reached at: [email protected]

Previous Post Liberian Women: The Greatest Assets of the Nation By Edmund Zar-Zar Bargblor
Next Post Town Trap is not for Rat Alone! By Elder Siahyonkron Nyanseor