As the scandalous and incompetent regime of Madam Sirleaf prepares to leave the political stage of Liberia, I feel compelled to walk Liberians and friends of Liberia down memory lane.

In December 1989, Mrs. Ellen Johnson Sirleaf and her associates financed, defined, promoted, and facilitated the National Patriotic Front of Liberia (NPFL) genocidal war on Liberia (TRC report, 2009).  The war escalated to the point that different warring factions emerged and, like the NPFL, ruthlessly raped women; tortured unarmed innocent people; pillaged the scarce natural and human resources of Liberia, and massacred innocent women, children, and the elderly.

With the intervention and help of the International Community, Liberians met on several occasions in different capital cities and adopted 16 peace agreements during the course of the civil war, all of which failed despite the fact that, the warlords and their patrons were rewarded and appeased with political and economic powers. Still determined to find sustainable peace and stability, again in 2003, Liberians with the support of the International Community, met in Accra, Ghana to sign a Comprehensive Peace Agreement (CPA) with the hope of bringing an end to the brutal civil war in Liberia and to put in place sustainable peace that will address issues of corruption and impunity in Liberia.

Article VIII of the CPA calls for the creation of the Liberian Truth and Reconciliation Commission (TRC) that would address the question of impunity in addition to providing a forum whereby perpetrators and victims alike would have an opportunity to tell their stories either to exonerate themselves or seek forgiveness. The TRC was also mandated to investigate the root cause of the conflict and make necessary recommendations to deter future violence, death, and destruction in Liberia.

After nearly three years of rigorous work characterized by agonizing and emotional tales of horrors and barbarism told by victims and at an estimated cost of US$10,000,000 (ten million United States Dollars), the TRC issued its final report in December of 2009. The report included a set of recommendations, which included but not limited to the creation of a National Human Rights Commission, enhancement of the peace process by implementing a wide range of measures to root out corruption and impunity, as well as other vices in Liberia.

to address issues of impunity and to ensure accountability for violations of human rights during the period 1979 – 2003, the TRC recommended 49 individuals including Madam Ellen Johnson Sirleaf, for debarment from holding public offices in Liberia for 30 years and other possible criminal prosecution by a specialized war crime court.

According to the TRC report (pp. 360-361), the 49 individuals, some of whom currently work in the administration of President Sirleaf, committed acts of gross human rights violations, as well as international human rights laws, war crimes, crimes against humanity, economic crimes, and the egregious violations of Liberian domestic laws. Contrary to the intent and spirit of the 2005 TRC Act, which obligated the Liberian Government to uphold and implement the Comprehensive Peace Agreement, including most especially the TRC recommendations, the Administration of President Sirleaf has failed to implement the TRC recommendations intended to address impunity in Liberia.

THE OUTCOME OF MADAM SIRLEAF’s INTRANSIGENCE

For the past 12 years, Madam Ellen Johnson Sirleaf has ruled Liberia like a private business enterprise and has failed to institute any genuine reform in Liberia in total disregard of the needs and aspirations of Liberians. President Sirleaf, who came to power with an overwhelming international support, has failed to reconcile Liberians and has unfortunately transformed Liberia into a criminal enterprise by recruiting and hiring her foot soldiers that reportedly raped, tortured, murdered, and decapitated the bodies

of their victims; as well as pillaged the scarce natural resources of Liberia. For Example, General Alhaji G.V. Kromah, former Chairman of the United Liberation Movement of Liberia for Democracy (ULIMO-K), one of the notorious rebel groups responsible for perpetrating torture and other heinous crimes in Liberia, is currently the Ambassador-at-large and Advisor on foreign policy to President Sirleaf, while his nephew,   Abraham S. Kromah, former chief of staff of (ULIMO-K) served as  Deputy Director of Operations, Liberia National Police (LNP)  up to the summer of  2015;  Kabineh Ja’neh,  who is on record by the TRC report  for recruiting child soldiers and proving legal and material support for ULIMO- K,  is currently one of the  Associate Justices of the Supreme Court of Liberia;  Lewis Brown, Charles Taylor’s NPFL spokesman, is currently the Information Minister of the Sirleaf government.

In 2005, Benedict Sannoh, the current Justice Minister of Liberia along with Cllr. Charles Walker Brumskine and Peter Bonnar Jallah, Jr.,  represented the interests of convicted war criminal, Charles Taylor, negotiated the Status of Forces Agreement (SFA)  with the West African Peace Monitoring Group (ECOMOG), which proved to be fraudulent.  As a consequence of these self-indulgence so-called legal experts of Liberia illicit act, ECOMOG prematurely left Liberia immediately following the election of Taylor in 1997.  Consequently, Taylor had the free hand to eliminate his perceived enemies.

On September 18, 1998,  the ruthless Executive Mansion Special Security Unit (EMSSU)  headed by Chucky Taylor, Taylor’s infamous son who  was convicted of war crimes and crimes against humanity by the US government and  the  Special Operations

Division of the National Police headed by the late  Joe Tate, former commander of Taylor’s notorious National Police moved on the residences of innocent tribal men and women belonging to the members of the late President Doe’s kinsmen. The outcome was mayhem – the massacred of innocent Krahn and Sarpo tribesmen and women, elderly, children and others on Camp Johnson Road, Monrovia.  The unpleasant scene was marked by human body parts displaced by high-power explosives and caliber weapons.

We believe Brumskine and his legal expert partners were fully aware of Taylor’s desire to run ECOMOG out of Liberia so that he could terminate his perceived enemies. Charles Walker Brumskine, Peter Bonnar Jallah, Jr. and Benedict Sannoh must account for the precious lives that were lost on September 18, 1998. Dr. Toga Gayewea McIntosh, the Vice President of the

Economic Community of West African States (ECOWAS) Commission, appointed by President Sirleaf is a founding member of the NPFL and served in many high-profile positions in Charles Taylor’s government.  Dr. McIntosh as one of the founding members and high-profile leader of the defunct NPFL is responsible for NPFL’s policy of terminating innocent Krahn, Mandingo, Sarpo, and members of the Liberian security forces including other innocent citizens from West African Countries that initially contributed troops to The Economic Community of West African States Monitoring Group (ECOMOG) mainly, Nigeria, Guinea, Sierra Leone, and Ghana. We ask the Nigerian authorities to arrest and prosecute Toga Gayewea McIntosh for war crimes and crimes against humanity on behalf of Liberian war victims and the innocent West Africans including Nigerians who were killed in Liberia by the NPFL forces.

In 2011, Dr. Toga Gayewea McIntosh and Cllr. Varney Sharman were featured in the documentary, “The Ambassador,” in which both men were filmed by a Danish investigative journalist selling Liberian’s Ambassadorial position.  In the documentary, Mads Brügger was accredited as Liberia’s Ambassador to the Central African Republic. He used the documentary to expose how Dr. McIntosh and Cllr. Sharman has been using their positions as Foreign Minister and Chairman of the ruling Unity Party (UP) to loot Liberia’s scare natural and human resources for their personal economic gain without regard to the suffering people of  Liberia.  These are just a few examples, but there are numerous Liberian perpetrators currently serving in various high positions of influence and power in the three branches of the Liberian government.

Additionally, there are many who pillaged, patronized, and economically benefited from the blood of Liberian war victims and are glamorously enjoying the fruit of their satanic crimes against Liberian war victims; and are walking down the streets of Liberia with absolute economic and social powers with impunity. A classic example is the person of Benoni Urey. 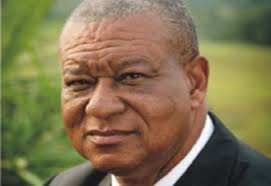 Urey is a passionate supporter of the NPFL who served as the head of the Liberian Maritime Bureau. He allegedly pillaged millions of dollars from the Liberian Maritime funds and used the money to support the NPFL onslaught on the Liberian people and the people of Sierra Leone. Today, Urey is regarded as a successful businessman, philanthropist, and an honorable elderly statesman. He is currently running in 2017 general and presidential elections.

If President Sirleaf is actually serious about promoting peace and justice for Liberia’s war victims, we call on her to immediately remove Justice Kabineh Ja’neh from the Supreme court bench, arrest Cllr. Benedict Sannoh, remove Mr. Lewis Brown from the UN as Special Representative of Liberia, arrest Dr. Toga Gayewea McIntosh, remove Cllr. Varney Sherman from the leadership of the ruling party and all those named by the TRC report from their current positions in government until the allegations against them are addressed through the proposed internationally backed war crimes court on Liberia.

By doing so, she would have demonstrated concrete steps in the direction of genuine peace, reconciliation, and justice for Liberian war victims. We cannot continue to allowed war and economic criminals to walk the streets of Liberia with impunity while ordinary Liberians who were victimized by their heinous acts continue to be dehumanized in abject poverty.

Upon taken oath of office in  January of 2018, Liberian war victims will demand the next government to swiftly organize an internationally backed war crimes court that would provide an opportunity for all those accused of war crimes and crimes against humanity including economic crimes to exonerate themselves through legal means. It will also provide an opportunity for Liberian war victims to channel their grievances. Based on what we know now, this is the only path to achieving sustainable peace and reconciliation in Liberia. Sustainable development is only attainable through sustainable peace.

We will not stop until those heartless animals are held accountable.  It is obvious that both Prince Johnson and Brumskine administration will resist the creation of a credible war crimes court in Liberia. Brumskine is on record for opposing the creation

of war crimes court in Liberia. Liberian war victims can’t wait any longer for justice while perpetrators continue to enjoy the fruit of their crimes. A vote for either Prince Johnson or Charles Brumskine is a recipe for another brutal war. Hope we have learned our lessons.

“The world will not be destroyed by those who do evil, but by those who watch them without doing anything” ― Albert Einstein.

“The only thing necessary for the triumph of evil is for good men to do nothing.”— Edmund Burke

He is also a community based project,  assigned to the  International Trauma Studies Program. This program specifically,  endeavors to address the needs of African immigrants.

He can be reached at [email protected]gmail.com

Spread the loveOf all the updates that have been given END_OF_DOCUMENT_TOKEN_TO_BE_REPLACED

Previous Post A VOICE FROM THE GRAVE:Tarty Teh’s Letter to Mrs. Ellen Johnson Sirleaf
Next Post THE SINISTER PLAN TO EXTERMINATE THE IGBO AND TO ELIMINATE IPOB