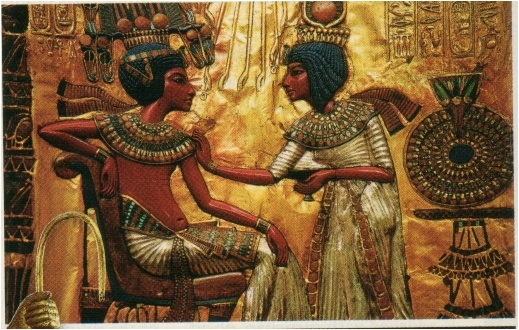 This article is a contribution to the continuing debate between Western and African scholars regarding the role Africans played in the development of modern civilization. According to Dr. George G. M. James, author of the book, Stolen Legacy," the authors of Greek philosophy were not the Greeks but the people of North Africa, commonly called the Egyptians; and the praise and honor falsely given to the Greeks for centuries belong to the people of North Africa, and therefore to the African continent." Apparently, the impression given by some Western scholars that the African continent made little or no contributions to civilization, and that its people are naturally primitive has, unfortunately, become the basis of racial prejudice and negative perception directed against all people of African origin. This article, therefore, is an overview of Africa's contributions to Western Civilization. As such, it will briefly trace the history of Africa beginning with the empire of ancient Egypt and continues on to other African empires that developed thereafter. It will also review some aspect of African Civilization and the impact it had on the development of Western Civilization.

The contributions made by Egyptians toward the development of what we consider modern civilization cannot be overemphasized. Between the periods of 3000 B. C and 1100 B. C, a long line of kings known as pharaohs governed Egypt. Under the pharaohs were the ruling of the royal court, governors of the provinces in which the kingdom was divided, and commanders of the army, etc. Priests and priestesses officiated at religious ceremonies and attended to the needs of their gods, but also served under the pharaohs. The Greeks brought Egyptian education and influences to the Western world. One of the Greeks who enunciated the cultural, religious, and philosophical teachings of the Egyptians was Pythagorus. He was one of the men who introduced the teachings of the Egyptians to the Europeans. As such, the knowledge he passed on to his followers were those he attained from the Egyptians. The teachings of Pythagorus came to us from three main sources. First, from the writings of one of his followers by the name of Nicomachus. In the introduction his book, “Introduction To Arithmetic,” Pythagorus’ theory was illustrated in a form closest to the original teachings by the Pythagorean brotherhood. Second, Pythagorean ideas can be found in the works of the great thinkers like Plato who was influence by followers of Pythagorus. Finally, some understanding of Pythagorus' theory may be attained form other famous writers like Aristotle. The Egyptians developed the concept of the right angle, which is the basis of the Pythagorean theorem. This concept is one of the fundamental teachings of the Egyptian mystery school. It is reflected in the designs of the ancient Egyptian pyramids, which were initiated centuries before the birth of Pythagorus.

This concept and others like it, however, were "introduced" by Pythagorus. They represent the understanding of man and the order of nature. According to the Pythagorean brotherhood, the study of the Number Theory which is the foundation of creation — is an aid to achieving harmony between the soul and that which one meditates. In his book, THE UNIVERSE OF NUMBERS, Ralph M. Lewis states, "The influence of the Pythagorean brotherhood extended over a long period of time. The followers of Pythagorus influenced Greek philosophers such as Plato and Aristotle. Thinkers such as Fluid, Vaughn, and Hoyden based their philosophy, to some extend, on Pythagorean ideas, including scientists such as Copernicus, Kepler, Galileo, and Newton." Chikn Anta Diop, a Senegalese historian has argued that Pythagorean theory, the concept of Pi, Geometric formulas and the screw and level are only some of the patrimonies of ancient Egypt and not of Greece as conventional wisdom holds. In the September 23, 1991, edition of Newsweek, page 49, Bernal, the author of the 575 page book, BLACK ATHENA, published in 1987, explores the reason why in the beginning of the 18th century European scholars intentionally omitted the names of Egypt and Canaan from the family tree of Western Civilization. Bernal's conclusion was that the classicists were racists and anti-Semites. They could not stand the idea that their beloved Greece had been made "impure" by African and Semitic influences. Therefore, they dismissed as mere coincidence, how Egyptian and Canaanite technologies, philosophies and political theories shaped Algean Civilization. Additionally, Bernal is convinced that many pharaohs were black. Among them was Menthotpe who reunited Egypt around 21 B. C after 300 years of chaos. Egyptians also initiated the concept of monotheism-the belief in one God. Akhennaten, king of Egypt and God of the sun was the pharaoh who introduced monotheism to his people. He was also a poet, artistic, an innovator, visionary, instigator of monotheism and forerunner of Christ. He ruled Egypt during the 14th century BC. The personality of Akhennaten continues to fascinate students of Egyptology. He was the husband of Nefertiti, a goddess of her time. Historians perceived Akhennaten as a good ruler who loved mankind. Some of his religious practices and ideas have influenced fraternities in the Western world.

KINGDOMS OF AFRICA SOUTH OF THE SAHARA DESERT

The empires of Ghana, Mali, and Songhai were powerful medieval states in West Africa. Each empire was advanced in matters regarding the administration of government and economic prosperity. During each era of their respective histories, they were powerful nations, which had vital trading links with the commercial world of North Africa and Europe.

Ghana was the first of the three empires to rise as a regional power in West Africa. The history of Ghana is based largely on the writings of Arab travelers who visited and traded with its people. Before the Roman Empire left North Africa in the 4th century AD, Ghana was already a powerful nation. Various countries in Europe were dependent on imports of gold before the discovery of America. The "civilization" of Ghana was advanced to such a level that a system of taxation was imposed on every load of goods entering or leaving the empire. Trading, therefore, was a highly organized system which the wealth and importance of Ghana was based. According to El-farzari, an Arab writer of that period, the people of Ghana were also successful in overpowering their advanced methods of warfare and their weapons, which were swords and lances.

The Empire of Mali emerged when Ghana's powers declined. In the 13th century, the Mandingo speaking people began to extend their kingdom and pushed towards the South and southeast regions of West Africa. Ghana's military forces were eventually defeated. When Sundaiata Kita became ruler of Mali, it became the most powerful of all the kingdoms of the Sudan. The gold trades continue to flourish under his reign. After Sundiata, his grandson, Mansa Musa, became ruler. During his reign, Mali became known throughout the Mediterranean world and in Europe.

During the decline of Mali, the Songhai Empire emerged. In about 1464, Soni Ali became king of Songhai. He was an ambitious young man who led his army to capture Timbuktu, a city known for its learning centers and trade routes, in 1468. Thereafter, he also captured Jenne, another famous city like Timbuktu. After Soni Ali's death, one of his generals removed his son from the throne and took control of the empire by force. He, thereafter, named himself Mohammed. Mohammed was very organized and instituted a system of discipline government. He created a number of central offices, similar to our contemporary government departments to oversee justice, finance, agriculture and other matters of importance in the affairs of the state. Under his rule, trade in gold from Sudan region continued to flow northward into Europe. Askia Mohammed imported manufactured goods, clothes, and salt from Spain and Germany. It was also during his reign that Timbuktu became a greater center of learning. Its university, one the first in Africa, was so famous that scholars came to it from all over the Muslim world, Europe and Asia. As a Muslim himself, Asking allowed Islamic influence to spread throughout the Sudan. Why did these African empires collapse? Some scholars cited the difficulties of defending the empire in the open West African region, in addition to the corruption influence of the slave trade. While W. E. B. Du Bois stated that Sudanese civilization fell before the triphammer blows of two of the world's great religions, Islam and Christianity. Another reason also advanced by Es-Sadi, a Timbuktu intellectual who wrote a history of the Sudan, TARKH ALSUDAN, for the fall of the Songhai Empire was that the people had grown fat and soft on luxury and good living. He said that, "At that moment, faith was exchanged go infidelity; there was nothing forbidden by God which was not openly done … because of these abominations, the almighty in his vengeance drew upon the Songhai the victorious army of the Moors."

From the history of four of Africa's great empires, it can be clearly seen that Africa and Africans have contributed to what we now consider Western Civilization). All along the West African coast, Africans had developed various systems of government, from the extended family to regional empires and the Village State. Many of them consisting of those attributes of a modern state (i.e., armies, courts, etc.). According to Melville J. Herskovits, a known anthropologist, "of the areas inhabited by non-literate people, Africa exhibits the great incidence of complex governmental structures. Not even the kingdom of Peru and Mexico could mobilize resources and concentrate power more effectively than could some of these African monarchies, which are more to be compared with Europe of the middle ages then referred to the common conception of the 'primitive' state." From the mystery schools of Egypt to the University of Sankore and other intellectual centers in Timbuktu and Jenne, scholars throughout the Western world came to Africa in search of knowledge and wisdom. Leo Africanus, a Christianized moor, informed us that at the time, "In Timbuktu there are numerous judges, doctors, clerics, all receiving good salaries from the king. He pays great respect to men of learning. There is a big import from Barbary. More profit is made from the book trade than from any other line of business." The learning centers in Timbuktu had large and valuable collections of manuscripts in several languages, including Greek and Latin. Africans are also a deeply religious and artistic people. To most Africans, religion and art are the foundations of life. Religion and art are a collective expression in which all the people participate. As I mentioned earlier, Africa's contribution to Western Civilization cannot be overemphasized. As early as in 1907, the great European artist, Picasso, changed the faces of his Canvas, LES DEMOISELLES D 'AVIGNON, to look like African masks. This marked a turning point in western art. I hope that information contained in this article will inspire others to explore the rich study of African history; especially African and African American youths that may want to know more about their heritage. Wise men throughout the ages have told us that, ''To understand and appreciate our history is to understand ourselves. In understanding ourselves, we gradually open the window to our ingenuity and inner creativeness.'' Happy Black History Month To All! About the Author: Mr. Edmund Zar-Zar Bargblor is an Instructor of Mathematics within the Providence School Department, Providence, and Rhode Island. He is a graduate of Cuttington University College, Liberia; Howard University, Washington, D.C, and Israel Institute of Technology, Haifa, Israel