Still On The Postponement of Edo Governorship Election-Joe Onwukeme 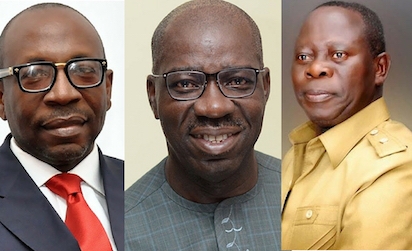 Still On The Postponement of Edo Governorship Election

The postponement of the Edo Governorship election, earlier scheduled to hold on the 10th of September over what our security agencies described as security threat by militants and extremists during the period has finally revealed the level of unpreparedness of our security agencies in times like this.

It calls for great concern that an intelligence report of insecurity was gathered and our security agencies that had already deployed more than twenty thousand of its personnel already to Edo State before the election was postponed couldn’t do anything about the intelligence report than calling for the postponement of the election. Does it mean our security agencies do not have all it takes to confront the insurgents in whatever capacity? What then is the essence of the intelligence gathering?

It is a slap on our security agencies and a threat to our Nation. What it simply implies is that, whenever there is an event as big as an election, what the enemies of our democracy and those who are not sure of victory during the polls need to do to frustrate the process is to fake intelligence report or mobilize thugs to issue out threats of a holocaust in some regions.

Trust our security agencies, even when such intelligence gathering can’t be verified, they will hurriedly call for a press conference with repeated sermons of insecurity and breach of public peace as the reason for the postponement without synergy and harmonization from other relevant agencies.

The action of our security agencies which coerced the Independent National Electoral Commission (INEC) into postponing the Edo governorship poll slated Saturday, September 10th has continued to erode the public trust in our institutions. Many are increasingly of the opinion that there’s no difference between our security agencies and boys scout, I concur!

Our security agencies shouldn’t allow miscreants and rag tagged urchins in militant form to dictate to Nigerians when things should be done or when not to, it is shameful, and regrettable that at this point in our democracy, our security agencies are failing daily to live up to expectations.

No one is talking about the losses incurred by all those involved directly or indirectly in the conduct of the election: INEC, political parties, supporters, and by extension Edo State by this singular act of postponing the governorship poll few days before the scheduled date.

The only thing that will justify the postponement of the Edo governorship poll is if those who our security agencies reported to have perpetrated plans to carry out a terror attack on innocent citizens during the period of the election are arrested and paraded, if not, all those involved in the postponement of the election should be punished/sanctioned for allowing rag tagged urchins and figments of some persons’ imagination to determine the fate of our democracy.

Spread the loveBuhari’ government through the ministry of finance took END_OF_DOCUMENT_TOKEN_TO_BE_REPLACED

Previous Post Ogun Free Trade Zone: How not to do business in Nigeria, By Bolu-Olu Esho
Next Post The Resurfacing of Congo Mentality in Liberia’s Socio- Economic and Political Life