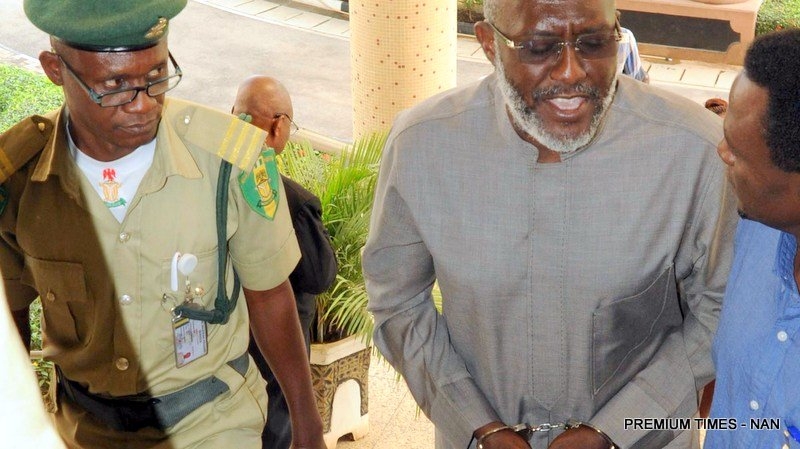 I have heard the condemnation trailing the handcuffing of Metuh and I won't say nothing else but well done to whoever thought it fit to handcuff him.

Suspects are always handcuffed when being transported to Court. So what makes Metuh’s case different? Didn’t he confess #400 million was transferred to him from the Office of the former Security Adviser, Col. Sambo Dasuki (rtd)?

He is not the first high profiled personality that has been hand cuffed in Nigeria, former Inspector General of Police, Tarfa Balogun (the greedy police boss) was not only handcuffed by the EFCC but became the first top official to be convicted of corruption.  The late Alamieyeseigha is another case study

Spare me the injunction of innocent until proven guilty or him not being violent. Metuh allegedly tore up a statement he made voluntarily to the EFCC, is that not an act of violence?

You expect armed security agents transporting such a man to court allow him the luxury of having his arms free, so the PDP permissive forces that possessed and made him tear his confessional statement will likely make him disarm the security agents and wreck havoc.

If he tries to prove violent and a happy trigger security official decides to do something tragic in such situation, President Buhari will be blamed for not securing Metuh.

If you think Metuh is not a violent person and does not deserve such treatment, ask Senator Chris Uba of his encounter with him. Chris Uba once alleged that Metuh beat him silly.

Metuh, in his reaction only said that if he had beaten Chris Uba, he would have killed him as Uba was short and would not match him in a fight.

So if your father or relative is the person transporting Oliseh Metuh to Court, then don't put him on handcuffs.

However, Metuh did not complain of his silver handcuff. His countenance and demeanor on Tuesday 19th on his way to the court shows an unrepentant PDP disabled remnant. Stop crying more than the bereaved and allow the rule of law dispose him properly.

Those whose palm kernels were cracked for them by a benevolent spirit should never forget to be humble.

Spread the love(Genesis 50:14 (NIV) …14 For God shall bring every END_OF_DOCUMENT_TOKEN_TO_BE_REPLACED

Spread the loveThe formulation and expected evolution of anything that END_OF_DOCUMENT_TOKEN_TO_BE_REPLACED