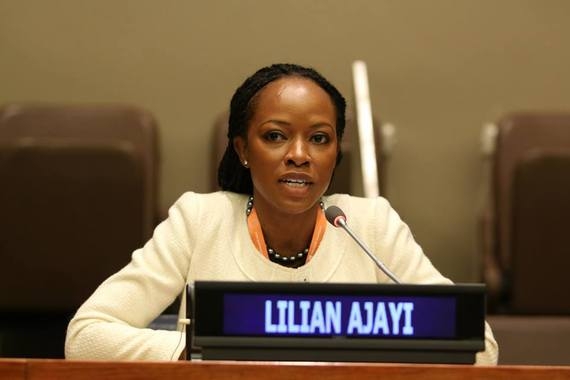 "It is not enough to be compassionate, you must ACT," said Jolly Amatya, in her opening remarks. The energy of the General Assembly hall was one of gratitude, compassion, leadership and courage – for they realized after heartfelt key remarks, what it meant to participate at the Youth Assembly at the United Nations. An opportunity which Amina J. Mohammed, Special Adviser to the UN Secretary-General Ban Ki-moon's stated, "Now you have a real chance to make a tremendous impact in the world – as the chosen few." The echo of her message and the rest of the speakers at the opening session filled the General Assembly Hall, opening the hearts and minds of the young delegates, presiding over their interactions all throughout the sessions. These young delegates were champions and strong advocates of the new Global Goals for Sustainable Development – delegates from the Middle East championed the "Peace and Justice" goal as they aim to correct the unsafe impression of being in Pataki and are advocates for women in the rural communities. "I want to be an Ambassador for the rural people in Pataki, because I realized how blessed I am and I want a chance to make a difference in Pataki and the rest of the world" said Arafat Rasheed, Youth Delegate.

The delegates from Asia championed "Reduce Inequalities" goal while I watched a presentation by a youth delegate on providing services in Thailand for children with mental disability and another approached me about her plans to spread more awareness on the LBGT communities in China.

"I want to create an online platform at the SUNY and CUNY schools, where young people can learn more about Global Development Matters – and can actively participate in bringing about change in their local and international communities" said Morgan Wood, Girl Up Teen Advisor and University aide for all SUNY schools here in the New York. Morgan champions the "Partnerships for the Goals." The delegates from Africa champion "No Hunger" – "More actions are required to address the needs of those in Africa, who live on less than $1 a day – for more people in Africa die everyday from extreme hunger than any other diseases" said Mohammed Buhari.

"Being here at the UN Youth Assembly with inspiring students from around the world reminds us that many of the solutions to the world's pressing problems are in the hands of young people today, if we only listen and give them a chance to start now. If they are empowered to take action early in their lives, then that very experience will make them into the generation of socially-responsible, effective leaders we so clearly need." said Oliver Libby, Chair & Co-Founder of The Resolution Project and Speaker and Partner at the UN Youth Assembly.

"I want to give kids in my country access to technology so that they can expand their imagination beyond their villages" said Cretu Veaceslav, youth delegate from Eastern Europe and The Resolution Project Social Venture Challenge Winner. Cretu grew up in a village with limited access to technology and the challenges he faced growing up poor led him to create "DigiKidz" – using digital technology to improve the educational system in high schools from rural areas in the Republic of Moldova. Cretu like many others in the Eastern Europe delegation champion the "Innovation and Infrastructure" of the Global Goals. As a millennial with a 501c3 not-profit-organization called the Global Connections for Women Foundation, one of the leading international non-profits of the millennium – in the areas of gender equality, women empowerment and youth empowerment. This paradigm shift in behavior is one I call "a new generational change in attitude towards global development matters."

Additionally, as the Founder and Executive Director of the Global Connections for Women Foundation, I felt truly honored to play a critical part in broadening the understanding of the youth at the UN Youth Assembly, on where we are in the fight for Gender Equality and Women Empowerment. During the global development workshop at the UN Youth Assembly on "The Status of Women and Girls in Africa and the rest of the World." I challenged the youth delegates in my session to Lean in, take action and join the global efforts in reversing the remaining threats to Gender Equality in their country and the rest of the world.

"We must use our God given talents to change the world" said Xiuhtezcatl Roske-Martinez, Youth Environmental Activists and Director of Earth Guardians – in his closing remarks on the first day of the session.

This generational change in attitude is critical to meeting the global development agenda post 2015, and it extends beyond the compounds of the Youth Assembly at the United Nations – as more youth in different parts of the world continue to play a critical role in challenging the status quo. In particular, Denise Mobolaji Ajayi-Williams from Nigeria – created the first African superhero story "Akiti The Hunter" and runs working mom in 1920s, a site that is redefining feminism for the millennial generation.

Alexander "Lexxistalking" Ore from Nigeria, created and produced Africa's first Afro beat dance film, The Dance Music Project (TDMP). His film depicts some of the challenges that the youth population face in Nigeria – when their passion is to dance, an unpopular profession in most countries in Africa, all while drawing a closer attention to one of the most deadly disease in Africa, Diabetes. There are an estimated number of 70 million people in Africa who are living with this disease and are undiagnosed. Jenish Amatya and Kanchan Amatya from Nepal started a fish farming empowerment program in Nepal, which is now assisting over 500 farmers in Nepal with their micro financing, training and local business development. They also raised $30,000 to support the Nepal disaster relief efforts during the earthquake that affected and displaced thousands in Nepal. One of the final lessons came from Lance Gould, Executive Special Project Editor of The Huffington Post, who advised the UN Youth Assembly delegation on the importance of partnerships, "Partnership is the Key to Global Development."

We must continue to invest in the talents and capacity of the youth in order to successfully meet the challenges in our world TODAY. The youth must remain motivated as they tackle some of the biggest challenges facing their generation.

"This is most empowered generation the world has ever seen" said Andrew Rabens, US State Department at the closing session of the UN Youth Assembly.

Lilian O. Ajayi is the Founder and Executive Director of GC4W Foundation. She is an Adjunct Professor at NYU School of Professional Studies.


Lilian O. Ajayi is the Founder and Executive Director of the Global Connections for Women Foundation, headquartered in New York and with programs in 3 continents including the United States, Europe and Africa. The organization currently launched the Give $25 campaign to bring an education and clean water to the Disabled Girls in the City of Karamajiji (Nigeria) by 2016.