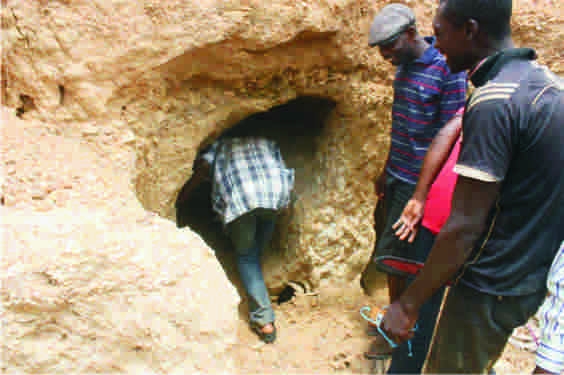 Between February and April this year, 28 children in Shikira community, in Rafi Local Government Area of Niger State, died. The medical reason was not known. One child after another, all under three years of age, developed the same symptoms: had high fever, were restless, cried excessively, convulsed, and then died.

Like many rural communities, where superstitious beliefs were strong and provided a mode of explanation, the people blamed it all on witchcraft.

There was panic and fear in the three neighbouring communities, Shikira, Magiro and Tungan Kawo, where death had become endemic among children, until David Umaru, the senatorial candidate of the APC in the March 28 National Assembly election, arrived on a vote-seeking campaign. There he learnt of the strange deaths and called in federal intervention, which brought Dr. Sani Gwarzo, from the Federal Ministry of Health, to the community to investigate the deaths. Dr Gwarzo’s interim clinical diagnosis of the probable cause of death: lead poisoning. That diagnosis was later confirmed by other health authorities.

HUB OF ILLEGALITY
Shikira community is situated on the eastern flanks of Kagara town, the headquarters of Rafi Local Government. Probably about 40 kms from Kagara, it is a herculean environment to access because of the difficult terrain. The road that opens up the area to the world is rugged, undulating, rocky and dirty. It snakes from Kagara through Madaka, the only sizeable town in the axis. It took us one hour, 20 minutes on motorcycles, and when we did arrived at our destination, all our body joints were creaking, the muscles severely cramped.

This heartland is the hub of illegal artisanal mining activities in the eastern axis of the local government.

Mining activities have been going on in Shikira communities for over four years. Here and there, there are shallow pits and furrows, where small gold-bearing stones, called quartz, were extracted and then abandoned when they no longer yielded the gem stones. And then the gold prospectors moved on to new minefields, which abound in the area.

But two years ago, a gold prospector, miner and merchant, called Mallam Zamfara Mai Idon Gani Zinari (i.e, the Man from Zamfara who can spot Gold) struck a rich vein of gold in Magami, northward of Shikira, in Shiroro Local Government area, some five kilometres away. Then there was a gold rush. A large number of fortune or gold hunters migrated, in droves, to Shikira, heralding population explosion in a village of barely 2,000 people. The village pulsated with people, all manner of people – prospectors, miners, merchants, millers, speculators, dreamers, mechanics, commercial sex workers, thieves. The burgeoning population meant for the villagers an opportunity to make brisk profits. One woman, Huzematu Adamu, said she made an average daily food sale of between three to four thousand naira.

Sa’adu Ibrahim, 21, who had gone to the Birnin Gwari gold fields to eke a living, hastened back to his village when he heard of the gold rush there. He worked in Magami with a group for two months before the site was closed. He made over N200,000 during the period, he said.

The gold miners excavated the depths of the earth crust, digging pits or burrowing tunnels to trace gold-bearing quartz stones to whatever earthly distance the gold veins travelled underground.

There are 21 mining pits in this site, each worked by a team of at least six diggers.

In one of the pits, dug by Abdullahi Ibrahim Magami and his colleagues, the gold stones they found sold at over five million naira. Another group of miners said they made over two million naira since the Magami motherlode was discovered.

Many of the pits are as deep as ‘Kwakwara’ wells, and they may still sink deeper to underground extremities where oxygen may not be available. Sometimes, the pits are linked through tunnels, in pursuit of gold veins, creating a warren of pits and tunnels. One of the pits, with heavy burden overhead, had collapsed earlier in the year, but luckily no one was hurt.

The quartz stones excavated from this site are taken to Shikira, where at the zenith of the gold hunt, there were at leat some 41 stone crushing and grinding machines, which liberate the gold ores from their entrapment in the quartz stones. In the village, there was a proliferation of auxiliary services, such as the provision of machines that whet grinding stones or soldering and welding of broken machine parts.

With the closure of the mines, the essential parts of these machines had been canibalised and redeployed in Birnin Gwari, in Kaduna State, or some parts of Zamfara State, where unfettered artisanal mining activities still go on.

With the closure of the mines and the processing activities, Shikira has shrunk to its previous size, and the villagers look back at missed opportunities occasioned by the departure of the nouveau visitors.

The village has fallen into hard times, defined generally by lack of money because the opportunities spawned by gold mining activities have gone. He said before their current sorry state, everybody in the village made money. We asked them what they did with the money, and Mr Nuhu pointed at the gleaming corrugated rooftops, which their newfound wealth had brought.

Since they made so much money at the expense of public health, we asked them if they would want a restoration of mining in the area, in spite of the side effects, to which Mr. Nuhu said they wanted the mining, without the deaths. Towards this end, he said they would like to be taught safe ways to mine. Meanwhile, they would like the state government to mitigate their current suffering by extending poverty alleviation schemes to them or give them cash intervention to pursue other economic activities.

In its natural state, gold is found mixed up with other minerals such as zinc, lead, silver, copper, etc in quartz rock formation. To extract it, the rock has to be crushed and milled into fine powder. When quartz stones are hacked and hauled from the bowels of the earth, they are brought to Shikira, where the first leg of processing activities began – crushing and milling.

This industrial activity releases fine dust particles in the air, the most lethal component of which is lead. At the height of the mining activities, dust haze permanently hung over the village of Shikira, wafting over a large radius of land that include Tungan Kawo and Magiro villages.

Every living soul there, including animals and birds, domestic or wild, inhaled the lead-poisoned dust, but the worst affected were children who could not cope with the abnormally high levels of lead. In Shikira, 11 children died while at Tungan Kawo, the worst hit, 17 children passed away. Tungan Kawo is situated southward of Shikira, with Fadama land forming a frontier.

Nearby, the gold miners had dug an artificial lake, wherein they washed off the gold impurities. The lake waters and the one underground are contaminated. In the day time, lethal lead dust drifts over the village, poisoning the air.

Lead poisoning has frightful effects. It causes mental retardation, inflicting poor iQ disorder and impairing speech capacity; it damages the kidney and retards muscle and bone growth. It causes anaemia and heats up the body infernally. As a result, children with high lead levels are feverish, cry a lot, enter convulsive spasms, and die.

Yet, in spite of its notoriety as a public health hazard in mining communities, especially where unsustainable mining techniques are employed, lead is used in the construction industry and in making water pipes, paints, electric cables, bullets, and solders. In Zamfara State, where the worst case of lead poisoning was reported between 2010 and March, 2013, about 734 under-five children died.

INTERVENTIONS
The people of Shikira communities were not abandoned in their hour of need. Beginning from Mr Umaru, who first drew the attention of health authorities to the plight of the community, there have been a number of policy, cash, and material interventions. Nuhu dan Magiro, the district head of Shikira said the duo of Governor Abubakar Sani Bello and Mr Umaru,now a senator, who on separate occasions visited the area, sympathised with the affected communities and made cash donations. While Governor Bello donated 50bags (50kg) of rice and N200,000 the senator donated N300,000 to the community.

The district head also acknowledged the intervention of the Federal Ministry of Health, which dispatched Dr. Gwarzo of the Public Health Department of the ministry, to the area for early epidemiological study. According to him, Dr. Gwarzo ferried the children of 18 affected families to the clinical facility of Doctors Without Borders in Anka, Zamfara State, where they were treated.

On its part, the Niger State government, upon receiving a report of a strange illness affecting children in Shikira communities, dispatched a team of epidemiologists to the area to ascertain the nature and extent of the disease and convened a high profile multi sectoral meeting on the incident. With the support of Federal Ministry of Health, Doctors Without Borders, and the Centre for Disease Control, a mapping survey was conducted, with the screening of all children under the age of five. The soil and animals, such as cattle, sheep, goats, were also collected to determine the level of lead contamination. The report of of the tests are still being awaited. The government also directed that the mining activities be stopped.

Meanwhile, 15 seriously affected children were taken to MSF clinic in Anka, Zamfara State, for treatment. The first set of nine children have returned from the hospital and are receiving followed-up care, while the remaining six are still receiving treatment.

Usman Mohammed, director, public health in the state Ministry of Health, said the state government was also considering setting up a treatment centre in Kagara General Hospital. He said the cleaning of the environment is still at the planning stage, with active collaboration from Doctors Without Borders.

On its part, the National Environmental Standards and Regulations Enforcement Agency (NESREA), said it plans to carry out enlightenment campaigns to the affected areas to create awareness on the dangers associated with illegal mining and on the need to adopt safe mining techniques.

The NESREA Assistant State Co-ordinator, Akor Monday, said the organisation would visit the affected area Wednesday this week to ascertain the level and gravity of environmental damage, saying his agency has held a series of meetings with the state Ministry of Mining to identify areas of intervention.

Spread the loveBy now, most people have read the story END_OF_DOCUMENT_TOKEN_TO_BE_REPLACED