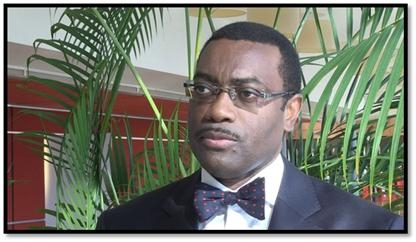 Dr. Adesina is a distinguished agricultural development expert with 24 years of experience in developing and managing successful agricultural programmes across Africa.

Until his appointment as the Honourable Minister of Agriculture and Rural Development in 2011, he was the Vice President, Policy and Partnerships Alliance for Green Revolution in Africa (AGRA). Dr. Adesina has held senior leadership positions in some of the foremost agricultural institutions in the world.

He was Principal Economist and Social Science Coordinator for the International Institute for Tropical Agriculture, Ibadan (1995-1998); Principal Economist and Coordinator of the West Africa Rice Economics Task Force at the West Africa Rice Development Association (1990-1995); and Assistant Principal Economist at the International Crops Research Institute for the Semi-Arid Tropics. He was Associate Director, Food Security at the Rockefeller Foundation where he was in senior leadership positions from 1998- 2008; Regional Office Director and Representative for Southern Africa.

He has published extensively and served on Editorial Boards of several leading journals. He was the President of the African Association of Agricultural Economists from 2008-2010. He has received several international awards for his work and leadership in agriculture.

Dr. Akinwumi Adesina is a development economist with an impressive record of delivering impact at scale across Africa. He has wide-ranging experience, having lived and worked in 15 African countries – including 10 years in francophone nations – experiences that truly make him a ‘Pan-African Candidate’.

Due to his depth of experience creating and implementing effective development programs, Dr. Adesina was selected by the United Nations Secretary General, Ban Ki-moon, as one of 17 Global Leaders helping to achieve the Millennium Development Goals.  He is also often called upon to consult on major development initiatives by the African Union, African Development Bank, New Partnership for Africa Development (NEPAD), and international institutions such as the World Bank, the United Nations, the United Nations Development Programme, the World Economic Forum, the International Fund for Agricultural Development, and several international bilateral development agencies. Further, he advises several African governments on the design and implementation of innovative, effective development programs.Having worked across diverse spheres including development finance, agriculture, rural economic growth, public policy, research, investments and resource mobilization, and public-private partnerships, Dr. Adesina has a holistic understanding of the development landscape and has a track record of executing bold and innovative ideas that have positively transformed the lives of millions across Africa. He is passionate about utilizing his skills and vast experiences to solidify the African Development Bank’s position as the premier development finance institution in Africa and for Africa.

As President of the African Development Bank Group, Dr. Adesina would seek to strengthen the Bank’s "on-the-ground people focus,” designing and implementing programs that would unleash a fresh wave of inclusive growth for Africa.

For the past 4 years, Dr. Adesina has served as Minister of Agriculture and Rural Development for the Federal Government of Nigeria. The agricultural sector is critical to Nigeria’s economy, accounting for nearly 30 percent of GDP and 70 percent of employment in Nigeria.

A bold reformer, as Minister, he turned the agriculture sector of Nigeria around within four years. Under his tenure, Nigeria ended decades of corruption in the fertilizer sector by developing and overseeing the nationwide implementation of an innovative electronic wallet system, which directly provides farmers with subsidized farm inputs using their mobile phones. Within the first four years of launch, this electronic wallet system reached 14.5 million farmers, dramatically transforming their lives. This system empowered female farmers in particular, who had been previously marginalized, often facing more difficulties accessing agricultural inputs than their male counterparts. His efforts earned praise from the Nigerian Women Farmers Association, which noted that no other Minister had worked as hard to improve the lives of women farmers.

The program was the first of its kind in Africa – and indeed the world – and nations across the globe including China, Brazil, India, and several African countries like Kenya, Uganda and Cote d’Ivoire have now indicated interest in developing similar programs. Based on the success of the program, the World Bank Group has also begun the process to replicate this initiative across other African nations.

A firm believer in private sector-led growth, Dr. Adesina changed the perception of agriculture in Nigeria from that of subsistence and instead promoting “Agriculture as a Business”, and approach that successfully attracted $5.6 billion in private sector investment commitments. He also led financing initiatives to support youth engagement in agriculture as well as small and medium enterprises (SMEs). Ultimately, under his leadership, Nigeria's food production expanded by 21 million metric tonnes, surpassing the 20 million metric tonnes target set out at the start of his tenure. As Minister, Dr. Adesina oversees 7,500 staff within the Ministry, as well as 15 agencies and parastatals.

Dr. Adesina is a Member of the Economic Management Team of Nigeria, the highest economic policy management body in the country. He plays a key role in the formulation of macroeconomic, fiscal, and investment policies across various sectors of the Nigerian economy including infrastructure, agriculture, energy, banking and finance, health, education, urban development, ICT, transport and extractive industries.

Prior to his appointment as the Minister of Agriculture, he was the Vice President (policy and partnerships) of the Alliance for a Green Revolution in Africa (AGRA) where he led several bold policy and innovative finance initiatives that leveraged over $4 billion in bank finance commitments towards Africa’s agriculture sector. Working with Heads of State and Finance ministers, leaders of the commercial banking industry, and central bank governors across several African countries, Dr. Adesina successfully led one of the largest global efforts to leverage domestic bank finance for the agricultural sector. A consummate and highly effective builder of strategic partnerships, Dr. Adesina has worked effectively with institutions across several sectors of the economy to lift millions of people out of poverty.

Before joining AGRA in 2008, he worked as Associate Director for the Rockefeller Foundation for 10 years, including serving as the Regional Office Director for the Southern Africa Office, based in Zimbabwe. At the Rockefeller Foundation he initiated programs to develop markets for African farmers, philanthropy for African business leaders, and improved access to education. He also served on the Technical Board of the Forum for African Women Educationalists.

In 2007, Dr. Adesina was awarded the prestigious YARA Prize in Oslo, Norway, for his leadership in pioneering innovative approaches to improve access to agricultural inputs for African farmers. He received the Distinguished Alumni Award from Purdue University, USA in 2008, the Distinguished Alumni Award in 2009 and the Grand Commander of Great Ife in 2013, both from the Obafemi Awolowo University.

He was awarded the Borlaug CAST Award in 2010 by the Council for Agricultural Science and Technology, USA, for his global leadership on agricultural science and technology. Dr. Adesina was awarded an Honorary Doctor of Humane Letters by Franklin and Marshall College, USA, for his innovative reforms and global leadership in improving the lives and livelihoods of the poor.

In 2010, Dr. Adesina was appointed by the United Nations Secretary General, Ban Ki-moon, as one of 17 world leaders to galvanize international support for the United Nations Millennium Development Goals. Dr. Adesina also serves on the Global Panel on Agriculture and Food Systems for Nutrition, recently launched at the G8 Food and Nutrition Summit 2013 in London.

In 2012, he was conferred with Nigeria's second highest National Honor, the Commander of the Order of Niger, for his outstanding service to his country.

In 2013, Dr. Adesina won the Forbes Africa Person of the Year award for his bold reforms in Nigeria’s agriculture sector. He is the first public sector Minister in Africa to win the award. The influential Leadership Newspaper selected him as the 2013 Public Servant of the Year, for his bold policy reforms, transparency, and public accountability.

In May 2015, he will be awarded an Honorary Doctorate of Agriculture by Purdue University, USA, in recognition of his development work in Africa.

Of all the updates that have been given so far END_OF_DOCUMENT_TOKEN_TO_BE_REPLACED

I am not sure I know how to address you END_OF_DOCUMENT_TOKEN_TO_BE_REPLACED

But if peace be not larded with END_OF_DOCUMENT_TOKEN_TO_BE_REPLACED

Press Release We are a group of concerned Nigerians living END_OF_DOCUMENT_TOKEN_TO_BE_REPLACED