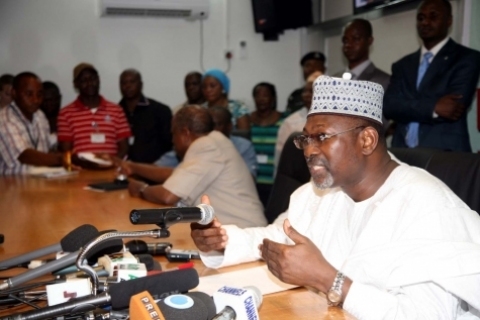 After weeks of intensive campaigns across the federation by political parties for the presidential election, the contenders have finally been separated from the pretenders. So far, the two front runners before us are: President Goodluck Jonathan of the incumbent party, PDP and General Muhammadu Buhari of the major opposition party APC.

Both presidential contenders would have been in their final week of campaigns before the doubts over the February 14th and 28th dates of the general elections was confirmed by Prof. Attahiru Jega, the chairman, Independent National Electoral Commission INEC.  Prof Jega has been under intense pressure for weeks from the government and security agencies to postpone the general elections over security issues.

On Saturday 7th February 2015, after series of meetings with civil society groups, political parties, and resident electoral commissioners, that lasted till late hours of the night, Prof Jega, held a press conference and painstakingly announced the postponement of the general elections.

The postponement of the general elections depicts a story of what happened few years back while serving as a member, National Youth Service Corps. (NYSC). The outgoing exco's regime came under heavy criticism for their high handedness and insensitivity towards the affairs of other corps members and the rule was that they will be the ones to conduct election for their replacement.

Before the election, potential candidates emerged from my batch, the next most senior batch for all the various posts, with innovative policies of what we will do differently pending the date of the election.The outgoing excos were not comfortable with our rising popularity coupled with heavy criticism of their leadership. They wanted a continuum of their kind of leadership to serve as punishment for criticizing them.  They knew if they conduct election the scheduled date they fixed they may not be able to impose their candidates on us, they kept on postponing the election and re strategizing but the more they postpone, the more it seems the odds are in our favor, when they realized the odds are against them, they conspired against us, they went to our supervisor and lied to her we were fighting over leadership positions and the best way to curb it was to select our batch mates that have not shown interest in any of the positions and form an interim exco that will take over from them.

Our supervisor accepted the idea, they fixed an impromptu meeting, in the gathering they told us they got an order from our supervisor to form an interim exco. An unpopular lady from our batch was announced as the head of the interim exco. Our protests and petitions on why we should test our popularity through election fell on deaf ears. When our supervisor came to settle issues, they told her the reason for our unrest was because the head of the exco is a female, without giving us a chance to air our reasons, our supervisor bought the story hook line and sinker and said because of that the unpopular lady will remain our president, anybody that disobeys her will get a query. That was how our plans for effective leadership was scuttled. Our innovative policies never saw the light of the day, the imposed interim Excos didn't perform any better and we lived with the pains of not being able to elect our own representatives with a slogan, "man proposes another man disposes", till we passed out.

The story above is exactly what's playing out right now in our political scene. The way many electorates are so sure of victory for their candidates in the presidential election and are looking forward to the general elections day to exercise their franchise was the same way we waited anxiously for the scheduled date of the elections to vote for our preferred candidates.Same way people are identifying and supporting the main opposition party APC because of their populist wind of change statement to Nigerians if voted into power was the same way our innovative policies of what we will do differently aided our popularity.

The ruling party PDP had thought it will be business as usual in this presidential election but from reports coming from their campaigns, they are coming to terms with the fact that their series of impunity are catching up with them, it is obvious they have realized how unpopular the twin monster, insecurity and corruption have reduced them to. Same way our outgoing NYSC excos were not comfortable with our rising popularity against their dwindling popularity and decided to punish us by imposing an interim exco after postponing the election severally, the ruling party's desperation is setting in, after sponsored calls and protests for the postponement of the general elections, they have succeeded in coercing our security agencies to insist they can't guarantee Nigerians security on the scheduled date of the general elections, as they will be busy in the North East alongside with security agencies of our neighboring countries in the fight against insurgency. Thereby leaving INEC with no choice but to postpone the general elections.

The postponement of February 14th and 28th general elections is a clear case of "man proposes another man disposes", force it against the will of the people and attribute it to the will of God. Are we going to allow man's disposition on the will of God this time?

What they couldn't do in 4 years, they want to achieve in 6 weeks, that is the level their desperation has degenerated to, the fear of defeat is the beginning of the eradication of insurgency, they have realized the insurgency in the North East will contribute to their heavy defeat in the general elections, hence calls for the postponement of the polls became inevitable.

Nigerians are already scared of the make or mar contest for fear of the uncertainty and can't wait for the general elections to come and go. We are very patient people as well, if we can wait for 4 years, what is 6 weeks? I just hope they won't tell us another story again after this.

Whether they like it or not, its the electorates time to get it right. It is "our long walk to freedom" and we won't allow few greedy politicians to stop what "God disposes".No matter what, God will always honor his own, though it may tarry, it shall come to pass. Que Sera Sera.The credit belongs to those who are in the arena, who strive fearlessly and who at worst, if they fail, fail while daring greatly. Theodore Roosevelt.

Spread the loveOf all the updates that have been given END_OF_DOCUMENT_TOKEN_TO_BE_REPLACED