Between OGD and SIA: He who comes into equity – Abiodun Egunjobi 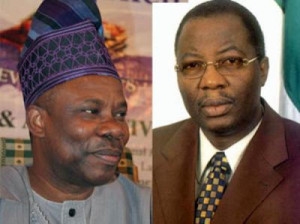 As Sir Issac Newton so famously stated when he lost a small fortune investing in the South Sea Bubble: "I can calculate the movement of the stars, but not the madness of men". This brings to fore my state of mind after reading the comments of Governor Amosu of Ogun state,  a sitting governor , who is desperate to disparage his predecessor but in the process put a noose around his own neck.

Amosun does not have the wherewithal to debate the cerebral OGD. It is all over their comments. When you result to fallacy of Argumentum ad Hominem in an argument, it betrays your level of tolerance to superior reasoning.  Not just tolerance , but ability of your gray matter to process issues and respond with facts and figures. I have heard many times that the man lacks intellectual capacity to debate or argue. I also heard he has anger issue. I am not surprised at all as he has lost many of his handlers to this incapacitation.

A few weeks ago, OGD stirred up a hornet's nest at Odeda using his records of performance. Daniel had accused Amosun of selling off all the farmlands in the area to other states, claiming Amosun’s administration had short-changed the people of Odeda. One will expect Amosu, to come over and use current record as available to set record straight and let the people be the judge. Instead he said “When they came into power, the farmlands were over 60, when we came in, it remains only five.  Our forefathers will never forgive them and the generations coming will also curse them. They thought we were like them, we are not..

“We are not bastards from Isoko. They came to us then, we are the one they ran to and we helped them to get where they are claiming today as their home. Although, it was not time for political campaign, yet, I will not hesitate to respond to Daniel’s allegations which he levelled against my administration here in the same Odeda Local Government.

The intellectual capacity to debate was completely lacking hence the resultant fallacy of Ignoratio elenchi. In advanced democracy, people will be calling on  Amosu to step down by now.

The question is, did Amosu sell the 5 that he met or he has increased it?   Has he sold off all the 55 non-functioning farms to other states ? This is the crux of the matter not where OGD hails from. Odeda people are not dummies. Do not beg the issue as the facts are on the ground

I Challenge Amosu to also come out with all the facts as they relate to this falsification of records and why it took him this long to come out. He who comes into equity must come with clean hands.

Spread the loveBuhari’ government through the ministry of finance took END_OF_DOCUMENT_TOKEN_TO_BE_REPLACED