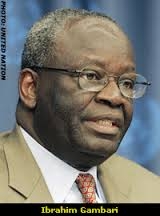 Prof. Ibrahim Gambari, former Under-Secretary General of the United Nations, has described officers of the Nigeria Police Force as the ‘best in the world’ in peacekeeping operations.

Gambari, who is the Chairman, National Conference Committee on Foreign Policy and Diaspora Matters, said this on Tuesday in Abuja while presenting the report of the committee to the conference.

The chairman, who commended the police for its professional conduct abroad, expressed regret that certain conditions had hampered their effective performance at home.

“Incidentally, our people seem to be doing much better abroad than at home.

“Then what is happening? How come we are so wonderful abroad and so terrible at home?” he asked.

Gambari observed that skilled and experienced Nigerians in the Diaspora were making valuable contributions to the economies of their host countries.

He said that the expertise and entrepreneurship of Nigerians in the Diaspora could be deployed creatively for the development of the country if properly leveraged on.

The former UN envoy said that Nigerians in the Diaspora sent over 21 billion US dollars as remittances to Nigeria in 2012.

“Although, the exact amount of these remittances is unknown, as not all of them are sent through official banking channels, the remittances outstrip foreign aids sent by Western donors to the continent,” he said.

Quoting a World Bank Report, Gambari said about 60 billion dollars was sent to Africa as remittance in 2013 with Nigeria alone receiving over 21 billion dollars in 2012.

The chairman said that in its report to the conference, the committee recommended the establishment of a Diaspora Commission as requested by about 30 million Nigerians in the Diaspora.

He said that Nigerian embassies abroad could not effectively cater for this huge population without a commission.

The committee, according to Gambari also recommended that the fundamental rights of Nigerians in the Diaspora to vote in the country’s elections should be safeguarded.

“We support the demand by Nigerians in the Diaspora to be allowed to vote in elections.

“We recommend that the provision of the constitution should be amended to provide for Diaspora voting,” he said.

Gambari said the committee also recommended that the federal government should make the welfare and security of its citizens at home and abroad the centre-piece of its foreign policy.

It also recommended that Nigeria should restore its relations with neighbouring countries particularly in the area of defence; but should not align with any power bloc.

The committee proposed that the Ministry of Foreign Affairs should be the principal and focal point in the formulation, advice and implementation of the country’s foreign policy.

The committee also recommended the upgrade of the Nigeria’s embassy in Addis Ababa, Ethiopia, to improve the country’s diplomatic ratings and image in Africa.

Spread the love  “Life’s most persistent and urgent question is, END_OF_DOCUMENT_TOKEN_TO_BE_REPLACED