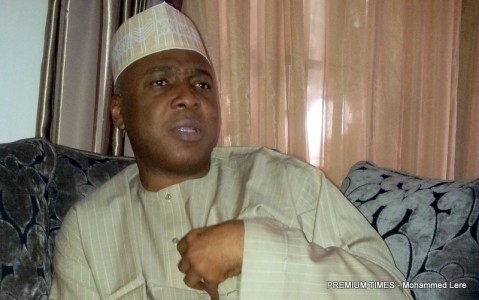 A massive public outcry forced Akwa Ibom Governor, Godswill Akpabio, to backtrack on a scandalous multibillion pension plan for himself and other former governors of the state this week.

But a review of similar pension laws in at least half a dozen states shows how Nigerians have spent a fortune maintaining their profligate former governors, and ex-deputies, with pensions for life, free health care, security, transportation, cars, accommodation and jobs- the same needs other citizens are deprived of daily.

The worst cases yet examined by PREMIUM TIMES are in Kwara, Lagos, Gombe, Zamfara, Akwa Ibom and Rivers States.

The Kwara pension law was first passed in 2003 and approved by former governor, Mohammed Lawal.

The Lawal law merely stipulated that qualified former governors and their deputies be paid pension for life, without other perks  like accommodation, cars and other perks.

The law was reviewed in 2010 by Bukola Saraki, a former governor of the state and a serving senator, who, with the support of the state House of Assembly imposed outrageous raises on all the benefits.

The 2010 law gives a former governor two cars and a security car, replaceable every three years. The governor is also entitled to a “well-furnished 5-bedroom duplex”, furniture allowance of 300 per cent of his salary (which totals over N6 million).

The law also gives the governor five personal staff paid for by the state, eight policemen, three SSS operatives(of which one must be a female), free medicals for the governor and the deputy.

As a senator, Mr. Saraki is currently drawing a monthly salary and a quarterly allowance of at least N40 million.

The Lagos pension law was signed by former governor and now leader of the opposition All Progressives Congress, APC, Ahmed Tinubu.

Mr. Tinubu cornered for himself and his former leaders of the state pension for life, two houses – one in Lagos and another in Abuja (The notorious Akpabio’s law ranks better here as the house could only be either in Akwa Ibom or Abuja, not both).

The Lagos law also gives the governor six cars replaceable every three years( 3 for the governor, 1 pilot, 2 backup cars), furniture of 300% of his salary as governor to be paid every two years, a security detail same as in Kwara state, free medicals for the former governor and deputies and their immediate families.

The Rivers pension law was first approved in 2003 by former governor, Peter Odili, having been passed by a state assembly headed by the present governor, Chibuike Amaechi.

In 2012, Mr. Amaechi, having taken over as governor, signed an amendment of that law, specifying benefits for former governors and himself when he leaves office.

The Zamfara version of the law was signed in 2006 by Ahmed Sani, now a senator.

The law gives Mr. Sani and other former Zamfara governors pension for life, two personal staff, two vehicles replaceable every four years, two drivers, free medical for the former governors and deputies and their immediate families in Nigeria or abroad.

The law also gives the former governors a 4-bedroom house in Zamfara and an office, free telephone and 30 days paid vacation outside Nigeria.

The Gombe version of the law ranks close Zamfara’s.

The significant difference is that the law states explicitly that the former governor or deputy has the right to be paid in lieu of benefits such as a house, vehicles and others.

The former governors are given pension for life, two vehicles changed in four years, two drivers, free medicals in Nigeria and abroad, a house anywhere in Gombe.

Another scandalous provision here, as with the Akwa Ibom law, is the provision of estacode for the governor and his wife for 30 days of annual vacation abroad.

The former chief executive is also given free telephone and internet services for life.

Civil Society campaigners have vowed a legal action to declare the laws null and void, accusing the beneficiaries of squandering the public funds.

“These pension laws are nothing short of an over-kill on the part of these crooked chief executives,” said Olanrewaju Suraju of the Civil Society Network Agaianst Corruption.

“Imagine Senator Saraki collecting whatever is contained in Kwara’s pension scam and receiving the bogus furniture and other allowances from the Senate. If he becomes the President of Nigeria, another pension entitlement is then guaranteed,” Mr. Suraju said.

Spread the loveOf all the updates that have been given END_OF_DOCUMENT_TOKEN_TO_BE_REPLACED

Previous Post When the righteous reigns, the people rejoice. The converse is also very true by Oluwasegunfunmi Oladele Akinwole
Next Post Jonathan plotting to kill me — Kwankwaso