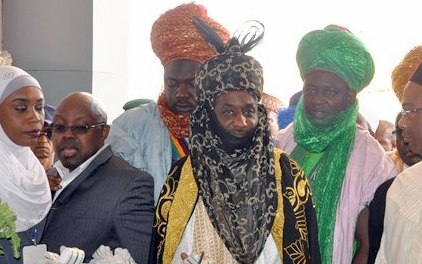 The former Governor of the Central Bank of Nigeria, Sanusi Lamido Sanusi, has emerged as the new Emir of Kano after the throne became vacant on Friday following the monarch’s death.

The Secretary to the Kano State Government, Rabiu Zakariya, announced the name of the new Emir on Sunday.

Kwankwaso had said yesterday at the Government House in the state capital, that the announcement will made today (Sunday), after the kingmakers of the Kano Emirate Council paid him a condolence visit.

“Insha Allah, by tomorrow (Sunday) those who are responsible to announce the new emir will do so,” the governor said yesterday.

The former monarch, Alhaji Ado Bayero, died on Friday and was buried the same day in accordance with Islamic rites with the Kano Emirate flag flown at half-mast.

Those in attendance during the prayers include the Vice President, Mr.Namadi Sambo, former military Head of State, General Muhammadu Buhari, Governor Kashim Shettima of Borno and his Jigawa state counterpart, Sule Lamido.

Also in attendance was the Sultan of Sokoto Muhammed Sa’ad Abubakar III. However, the Kano state governor, Rabiu Kwankwaso, was absent during the burial.

Until his death, Ado Bayero, was the Chancellor of the University of Ibadan.

He was the 13th Emir of Kano from the Fulani dynasty and 56th ruler of Kano Emirate from the late Abdullahi Bayero House.

Ado Bayero is survived by four wives and about 62 children.

Mr. Sanusi’s appointment was announced Sunday by the secretary to the Kano state government, Suleiman Bichi.

The announcement followed the recommendation of the four members of the Kingmaker council who nominated the new emir to the governor.

Sanusi Lamido Sanusi was born in Kano Northern Nigeria, on July 31, 1961. He obtained degrees in Economics and Islamic Law from the Ahmadu Bello University, Zaria and the International University of Africa, Khartoum.

After teaching economics for two years at the Ahmadu Bello University, he started a banking career in 1985 with Icon Limited (Merchant Bankers) and later worked with the United Bank for Africa Plc and First Bank of Nigeria Plc.

However, it was in the field of Risk Management that he earned his professional reputation, having distinguished himself as the Chief Risk Officer in the two largest banks in the Country, UBA Plc and FBN Plc.

He rose to the position of Group Managing Director/Chief Executive officer of First Bank Plc, the largest bank in the country in January, 2009 and was appointed the 10th Governor of the Central Bank of Nigeria (CBN) in June, 2009.

He was however suspended from office by President Goodluck Jonathan on February 20, 2014 after he was  accused of “financial recklessness”.

Many Nigerians however believed Mr. Sanusi was targeted for blowing the whistle on corrupt national oil company, the Nigerian National Petroleum Corporation which he accused of failing to remit at least $20billion oil revenue to the Federation Account.

Prior to his suspension, Mr. Sanusi had exposed the NNPC as a cesspool of corruption.

Spread the love(Genesis 50:14 (NIV) …14 For God shall bring every END_OF_DOCUMENT_TOKEN_TO_BE_REPLACED

Previous Post Dora Akunyili Bows Out
Next Post Simply put, the Haramites in the APC cannot be trusted with power- FEMI FANI-KAYODE