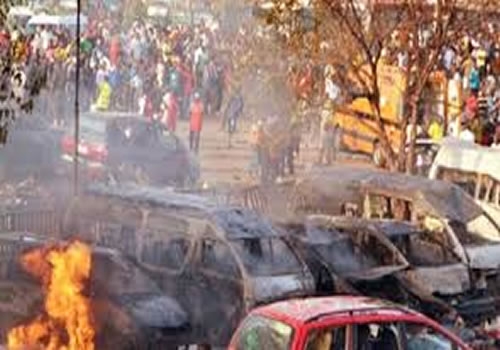 A sad story comes from Nigeria just a week before the  national team plays the United States in Jacksonville to get ready for the World Cup.

"There has been a bomb explosion at a football field this evening and so far more than 40 people have been killed," said the officer who requested anonymity in the town of Mubi, which has been attacked before by Boko Haram Islamists.

Police in Mubi, Nigeria have confirmed a bomber targeted fans watching a soccer match, killing at least 40 people in a violent explosion.

Mubi is in the country’s northeast, which has been ravaged by Boko Haram resistance forces.  The Nigerian president 2 days ago has promised “total war” will be waged on this Islamist group.

“There has been a bomb explosion at a football field this evening and so far more than 40 people have been killed,” an anonymous police official said.

The city of Kano, Nigeria (pictured), just to the west of Mubi in Nigeria’s northern region, has been on the receiving end of a number of vicious bombings in the past few days, including a suicide attack just two weeks ago which killed four.

But this new attack sadly targeted a soccer gathering, as the five-year Boko Haram uprising has gained steam in the northeast with the government working hard to put it down.

The town of Mubi was the same town that played host to a brutal killing spree at a technical college.

With Nigeria looking towards the World Cup, the attack is a dark spot on their preparation for the biggest stage, and there will surely be heavy hearts during their next two fixtures, against Greece on Tuesday and versus the United States on Saturday in Jacksonville.

Spread the loveAs the nations of the world endeavor to END_OF_DOCUMENT_TOKEN_TO_BE_REPLACED