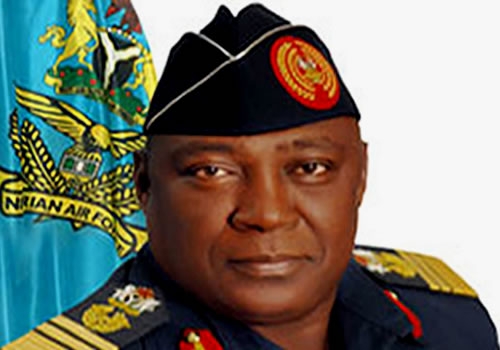 THE Chief of Defence Staff (CDS), Air Chief Marshal Alex Badeh, in Abuja, on Monday, said the military now knows where the abducted schoolgirls in Chibok, Borno State, are,  adding that the military will not use force in the rescue operation.

Badeh disclosed this while speaking to members of the Citizen Initiative for Security Awareness (CISA), a non-government organisation, who were on solidarity campaign to the Defence Headquarters.

“The good news for the parents of the girls is that we now know where they are, but we cannot tell you, we cannot come and tell you the secret. Just leave us alone, we are working to get the girls back.

“I can tell  you our military can do it, but where they are held, can we go with force? Nobody should say Nigerian military does not know what it is doing. We can’t kill our girls in the name of trying to get them back. So we are working, the president has empowered us to do the work,” he said.

Badeh said the fight against insurgency was quite different from full scale war, adding that “if we are fighting an external war, they would have been begging us to withdraw.”

According to the CDS, the Nigerian military had proved its worth in the civil war in Liberia and Sierra-Leone, lamenting that in the North-East, the military was fighting its fellow brothers.

Meanwhile, a coalition of civil society organisations, Nigerians United Against Terrorism, has said the most potent weapon against terrorism is for all Nigerians to rise up in one voice and take action.

The group, speaking through its spokespersons, Honourable Ben Lar, national president of National Youth Council of Nigeria, Abdulmajeed Abdullahi; delegate to the ongoing confab, Hajia Fati Ibrahim and the national president of Joint National Association of Persons with Disability, Miss Judith Umoh, at a mass rally held in Abuja, on Monday, said the time had come for all Nigerians to unite against terror, as well as exert pressure on the insurgents to immediately release the abducted girls.

According to Honourable Lar, the efforts of the military must be appreciated by all and sundry, adding that the situation would have been far worse if they were not being engrossed in their constitutional responsibility of quelling internal insurrections and repelling external aggression.

She announced that a welfare fund, to which all Nigerians could contribute to support families of fallen heroes, had been established.

Abdullahi, who spoke on behalf of the youth, said if the military had not taken up the responsibility, the entire northern state would have been consumed by violence.

The market women leader, Mrs Felicia Sani, lamented that the violence unleashed on the society by Boko Haram had now reached unbearable level.

Speaking to the group, Badeh, who was surrounded by other service chiefs, said the military was resolute in the war against terror, so as to make the country peaceful.

Spread the love(Genesis 50:14 (NIV) …14 For God shall bring every END_OF_DOCUMENT_TOKEN_TO_BE_REPLACED

Previous Post Is Radical Islam a New Phenomenon in West Africa? By Edmund Zar-Zar Bargblor
Next Post The World’s Poorest President, But The Reason Why He’s Poor Will Surprise You.