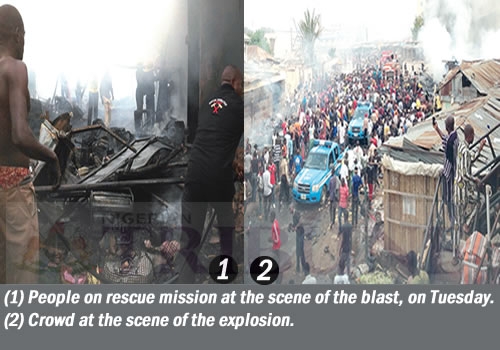 DEATH toll in the twin car bombings in Jos, Plateau State, has risen to at least 118, an official said. He warned that the toll could climb higher.

These attacks, which brought entire buildings down on Tuesday, was the latest affront to the government's internationally-backed security crackdown.

"The death toll stands at 118. This is the number of victims recovered from the scene of the explosions, but we are still searching through the smoldering debris for more bodies," said Mohammed Abdulsalam, coordinator for the National Emergency Management Agency in the city.

"The figure may rise when the search is over," Abdulsalam said.

Earlier, Plateau State Commissioner, Chris Olakpe described the blasts as "terrorist activities," but refused to speculate on who might be responsible.

In a statement, President Goodluck Jonathan condemned the bombings as a "tragic assault on human freedom" and described those behind them as "cruel and evil."

The prevailing peace in Jos, was shattered, when the twin bomb blast hit the Terminus area of the state capital. Earlier, no fewer than 60  people were said to have died, leaving scores of others injured.

Some of those on rescue mission, who earlier spoke with Nigeria Tribune, disclosed that no fewer than 60 people were killed in both the first and second explosions, while many people were seriously injured.

Plateau State, especially Jos, for quite sometime, had been enjoying relative peace, despite hostilities in neighbouring states, as the last bomb explosion in the state capital was in 2012, when a car laden with bomb rammed into a church.

On Tuesday, a car laden with explosive was parked at Murtala Mohammed Way as early as 9.00 a.m by an unknown driver, who disappeared before those trading within the vicinity could  ask of the ownership.

An eyewitness told the Nigerian Tribune that the vehicle, loaded with maize in sacks, suddenly exploded at about 2.30 p.m., when those within the vicinity were engrossed in their business.

The explosion forced the people to scamper for safety, while a few unlucky others were caught up in the explosion.

The explosion went up with heavy smoke, which spread beyond the spot of the incident. It left in its wake dismembered and shattered bodies.

While security agencies and officials of National Emergency Management Agency (NEMA) were trying to clear the scene, a Toyota Sienna car parked close to the scene of the first explosion went off, killing no fewer that 30 people close to it, while many others were left injured.

He enjoined citizens of the state to desist from rushing to the scene of explosion, adding it had been established that whenever there was an explosion, there was always a secondary one, which could explode within 30 minutes interval.

Meanwhile, the state Commissioner of Information, Mrs Olivia Dayam, has appealed to the people of the state to remain calm and be law abiding, adding that security personnel had already been drafted to the affected areas to maintain law and order.

The situation caused many shop owners and businessmen in the state capital to close business early, while people rushed home to avoid being trapped in the ensuing incident.

President Goodluck Jonathan has strongly condemned the bomb blasts which occurred in Jos, while he described the perpetrators as cruel and evil.

The Special Adviser to the President on Media and Publicity, Dr Reuben Abati, who briefed State House correspondents in Abuja, on Tuesday, said the president had also directed all relevant agencies to mobilise support and relief efforts in aid of the Jos blast victims.

The president, according to Abati, extended his sympathies to the affected families and persons and assured all Nigerians that the administration remained fully committed to winning the war against terror.

Abati also said the president had approved emergency relief assistance by NEMA, in partnership with donor agencies; safety of schools and that the administration would rebuild the Government Girls Secondary School, Chibok, where over 200 girls were abducted by terrorists.

Spread the loveAs the nations of the world endeavor to END_OF_DOCUMENT_TOKEN_TO_BE_REPLACED